Skip to content
HomeGamingBlood Bowl Playoffs: Humans vs Chaos (Round #2)

The Blood Bowl season at my FLGS has been slowly plodding along. Regular season ended early March, and we’ve been all this time since trying to work through the playoffs. It’s like herding cats…

Anyway! I finally got in my playoff game on Wednesday. I played Karl with his Chaos team, and the winner would move on to the final game.

Karl won the coin toss and decided to kick the ball to me. He placed the ball near the line of scrimmage. It scattered a bit towards a side, and then he got Blitz for the kick-off result. Oof.

Karl’s advance was pretty minimal on the Blitz. I moved to surround the ball on my turn. Once I had the area secured, my Thrower moved in to pick up the ball.

I started a drive down the right side of the field, but I was getting pinned in. My Thrower handed off to a Catcher, who then ran down the center of the field and up the left side, out of reach of anyone. You have to love MA8.

I stalled with the ball until turn #7 when I ran it in for a touchdown.

Karl wasn’t able to score with his two turns, so into the 2nd half we went.

My kickoff to Karl was a touchback.

Giving the ball to a Beastman, Chaos started to drive up my left side. I setup my defense to stall the cage, not attack it. However, Karl started marking up my players, and I punched back – hard.

My Ogre started mangling people, and the cage was falling. Karl tried to move the ball to the right side of the field, but it left him exposed and I popped the ball loose.

Apparently the planets were perfectly aligned for my next play. My Thrower moved to pick up the ball (4+ for tackle zone) and got it. He then dodged away from the Beastmen he was marked with (3+). From there he went to throw a Long Bomb (6+) and succeeded! No interception. My Lineman it was thrown to needed a 4+ to catch it – and he did! The Lineman dodged away (3+), and ran for the end zone while making two Going for It rolls (2+), to stop one short of the end zone. It was quite a string of luck I had there.

Karl couldn’t reach my Lineman, and the following turn I scored.

I forgot to get shots after that as we were rushing through turns to get done before the store closed. I kicked off to Karl again, and I was able to get the ball loose once more. My Catcher picked it up and threw an inaccurate pass to a Lineman downfield. Karl had an early turn over that let me pick up the ball and run it in again for a final score of 3-0. Victory to the Titan Bay Thunderhawks!

There’s no doubt that luck was on my side for that second touchdown, which pretty well sealed the game. My Ogre was on fire this game as well. He’s played in 3 regular season games, and during that time he’s only caused 1 casualty. In this game against Karl, my Ogre caused 3 casualties, and important casualties too. My Ogre took out 2 Warriors and the Minotaur, so I’m very happy with his performance this game.

I leveled up 3 players this game, which was awesome. My current team looks like this:

Now, it’s off to the final game against Jeremy and his Human team. We’re aiming to get that game in next week, so stay tuned.

Well done! Best of luck in the finals!

Good job man, you did indeed have a string of luck there but sound tactics on the other two tries. Plus painted wins over unpainted right?

My luck tends to be the opposite, though your theory is the one I keep hearing ;)

Congrats! Great choice on putting guard on your Ogre. Players have to really think to deal with your center line when a big guy is aiding all the blocks to other players and you don’t even deal with Bone Ead’ until you activate him.

Exactly. Big guys are a chore to deal with already, and giving them a support ability just makes them all the more useful.

Congrats on the win and it was a fun recap. Sounds like your ogre finally got the message through that thick skull

haha! No pun intended, right? Thick skull is a “skill” he has if you didn’t know. 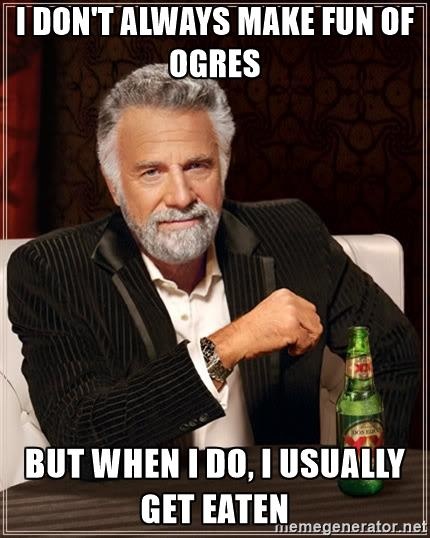