Those who follow me on social media will have seen some progress updates on the Chaos Predator. However, I realized I haven’t shared anything here since stripping the paint and tearing it apart. So, picture time!

So, since the last update, the model got put together finally. Working with so much metal was a HUGE pain in the ass. I have never filed, sanded, and filled so much on a single model. A lot of modeling work was done to repair this beast. A lot. It’s still not perfect, but I’m happy. At some point you have to give up on perfect and go for workable.

The lascannon sponsons are plastic needle tips used for drawing and mixing fluids. I used them before on my Helbrute’s lascannon I created, so I figured they’d fit in with my army on the Predator.

I had tried to do some modeling on them to make them a bit more lascannony, but each thing I tried just didn’t look right. In the end I said screw it and left them as-is.

As for painting, I’ve made a fair bit of progress. Shading is done, and some highlighting (blending) is also done; though I do have to smooth out a few of the blends. I still have to do edge highlights and paint the tracks as well.

I haven’t touched the turret yet beyond basecoating. I meant to put it on for the shots, but I forgot. Doh!

Lastly, the stylized Chaos star was an experiment and a cover up. I had some blending I couldn’t fix to save my life, so I figured I’d cover up the problematic areas. I’ve always liked the look of imperfect, streaky painting, so I went for it on the star. I really like how it came out as well.

One thing I was considering with the star was glazing it with a red. If I do that then it will take on a fleshy scar-like appearance. It would look a bit like what I did on my Knight. 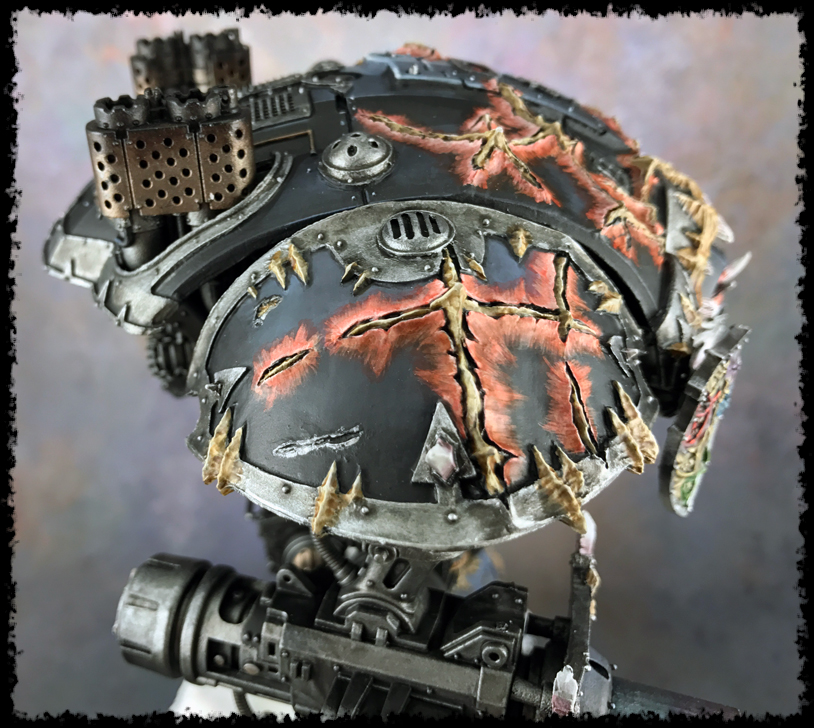 It wouldn’t exactly match that, as the process for the star was different, but it would resemble it.

What do you all think: leave it white or go fleshy?

Update: You can check out the now painted Chaos Predator.

Really love the white star on the blue…looks so wicked cool!

Do you think I should leave it white, or glaze it red for a fleshy look?

No, unless you have similar red on other parts

As cool as the fleshy look on that knight is, I’d leave it as is, looks great!

Unless you are going to raise it up like welts then I would leave it white.
Looks well ;)

Thanks for the feedback and compliment. So far white is winning.

Looking good. The star actually really looks a lot like some of the ones the FW team put on their Chaos Vehicles. Very solidly in the CSM aesthetic. Those are also cool-looking Lascannon, and honestly, probably more realistic barrel sizes than the actual GW ones.

You’re right about the star now you mention it. I know exactly what you’re talking about.

The actual lascannons for it (which I obviously didn’t have), aren’t very cool looking. I looked them up to try and find the bits. I found them then decided they weren’t worth buying. I may have to keep this lascannon motif going throughout the entire army ;)

The regular Predator Lascannon from that era are boring, but I actually like the ones they did later on specifically for the Chaos Predator. Yours look plenty cool, tho.

Ah. I only saw the original ones. I didn’t realize they did more than one set. Ah well!

They never did make a Chaos Twin Lascannon Turret, tho.

That’s definitely a step up from the standard one.

The finished product is always further away than you think it is. In my mind I can finish this in a few days, but reality probably says a few weeks at least.

Great work on it Thor!
After I finished my last metal model (the Carnosaur) I decided I’m done with metal models as they are such pains to work with!
I too like the white star and match Greg’s comment on only paint it red if there are other areas to add it. The asymmetry looks nice.

This will very likely be the last metal model I work with too, at least if I have a choice. It just makes everything take twice as long.

I did leave the star white. I sealed the model last night, added some snow this morning, so shots going up tomorrow I hope.