Skip to content
HomeGamingFirst Curse Genestealers to the Rescue!

I, like a million other gamers it seems, am looking to build a genestealer cult army. This army just appeals to me on so many levels: lore, models, rules – the fact that genestealers are actually functional now. Due to the insane cost of the hybrid/metamorph box (basically $1 a point here in Canada!) I’m being very methodical about what exactly I want to buy and how the army works before I start selling various organs to make this happen.

In the meantime however, I do have a ton of genestealers languishing in their foam collecting dust.  One of the units that is most improved with the new book are genestealers of course, and I do have an easy to incorporate formation to my existing Tyranid army – The First Curse.

The new cult genestealers are the same point cost as before, but now sport a 5++ invulnerable save, stealth and come with three attacks stock.  This may not seem spectacular to those who’ve never played stealers before (I’m raving about a 5++ after all) but previously you died with no saves whatsoever to bolters. You know, the most common weapon in the game.  Nevermind what flamers did to you when you finally did (theoretically) attempt that charge.  Stealth and that extra attack are just icing on the cake!

Now with the first curse formation, you’re also getting furious charge due to the Patriarch and a super happy random fun chart (thanks GW) which gives some pretty spectacular bonuses, including a 4+ armor save, rage, preferred enemy, grenades or poison!  Cult ambush (yay for random charts!) and return to the shadows means the unit is never truly out of position unless you roll a 1, and with return to the shadows this is easily rectified.  So with this formation you’re required to take 20 stealers with the Patriarch (like you wouldn’t anyways!) and it’s really not very point intensive to do so. The upgrade to level 2 for the Patriarch isn’t technically mandatory, but you’d be crazy not to. Likewise a couple familiars is a very cheap and good buy.

What does this give a Tyranid player?

I had a chance to test out the theory this past weekend in a couple of games. I took a first curse formation and a combined arms detachment of Tyranids – double flyrant, malanthrope, gaunts, spores, a couple units of dakka fexes and a tyrannofex in a pod.

Basically wanted to test out if the First Curse was a benefit to my standard nid list, or should I just keep a hive fleet leviathan detachment for the third flyrant and a few odds and ends instead.

Well I have to tell you that the formation did not disappoint.

In my first game I faced orks.  My opponent had a buzzgob stompa (the half price forgeworld one!), two units of truck mounted tank bustas, couple beefy loota squads, some meganobs and a big bike deathstar with painboy, warboss and that forgeworld bike boss with the at initiative power claw.

I rolled the fabled 6 when it was time for the first curse to come in and ripped the deathstar to shreds before it could swing.  The orks only had a couple models left, broke the unit and ran it down with ease.  After some retaliation casualties it returned to the shadows while the stompa bore down on their previous location.  Sure then when they returned from cult ambush and rolled the dreaded 1 and got annihilated by said stompa – but they held it up at least and removed some hull points so still served a very good purpose.

Second game was vs. deathwatch with some dudes in pods, some sniper marines on an objective,  a dread in a pod, a scary deathstar in landraider (it was deathstar day I guess) and one of those fancy cool flyers. With the first curse able to meet the deathstar head on once it disembarked I just didn’t have to devote any of my other units to try to deal with something they just weren’t able to deal with effectively.

The first curse is just a really good answer vs. deathstars.  They hit first and with all those rending attacks, they don’t really care if you’re a necron wraith, TH/SS terminator, or tooled up character. It’s just a mass of forced saves that have the potential to carve armor as well.

At least at first run, they do exactly what they’re supposed to do, and have outperformed every other time I’ve fielded genestealers.

Given stealers are my favourite Tyranid unit (the other being warriors – yes, this has been a rough go for me these last few years!) I’m very excited that the stealer is back, and they are most definitely something to be feared on the tabletop again!

…now if I can just figure out a way to sell this extra kidney on the black market I’ll be able to afford those hybrids.

Nooo resist the cult! Apart from those Goliath trucks, they can stay because they look sweet.

Sounds like someone needs to accept the four armed emperor as their lord and master?

The Cult does look super interesting. I’d love to try them out, but I just invested in Harlequins when Death Masque came out. I can only support one xenos army beyond my Space Marines.

It will one day be a full army for me, but I just need to really plan this one out due to the crazy expense of the hybrid/metamorph box. The models are just so cool looking!

Thanks for the in game report – always nice to read actual experience vs theory hammer. The variability of Cult Ambush makes me wonder whether getting the brood coven detachment and fishing for the warlord trait allowing choosing your option would be worthwhile.

On the hybrids $ cost… yep. Saving grace is that the Deathwatch overkill models are pretty reasonable and then the boxes can be used for those sweet special weapons.

I’m likely going to start with two boxes of overkill for my full GC list and try and sell the deathwatch to recoup some of the expense.

List I’m planning however is all infantry all the time, and going to cost a fortune without some converting:

Brood Cycle: +1 leadership and WS if close to one another, furious charge and 6+ FNP bubble of 24″

Well the subterranean uprising formation is the only way to mitigate the random cult ambush chart. Brood cycle core is really just a core tax for the most part, so need to find a role for them. The hand flamers will at least be able to put a hurting on T3 models in cover and the smaller units can at least eat some charges / overwatch or camp some objectives.

The real damage of course comes from the bigger units. All the units with a cult icon are WS5

The abberants with characters will have a 5+/4+ FNP, and get to charge in with furious charge and hatred – 24 S9 AP2 attacks, and 5 S5 AP3 instant death on 6’s – and get to roll 3 dice and take whichever they like for cult ambush.

The first curse is just brutal on the charge. Sure those 20 genestealers will die like flies still, but turn one in cover they’ll be rocking a 2+ cover save at least. (stealth first turn)

The metamorphs will on the charge have 40 S6 rending attacks

This all sounds great until you think about how easy it is to kill T3 models with a 5+ save….lol

They’re so much better than the Tyranid equivalent for the same price! It gives me hope that this will be the genestealers in the next Tyranid book. If they’re left the same… well I just can’t be held responsible for what I’d do… pitchforks, torches and a trip to Nottingham might be in the cards!

They probably won’t change in a new codex. The Cult Stealers are veterans, the Nid ones got pooped out hours ago. It’s a fluff thing that is actually reflected in rules, which is crazy for GW.

pitchforks and torches it is then! Yeah I read all the purestrains vs. regular genestealers info and it’s unfortunate if it stays status quo because you’ll never see regular stealers again if that’s the case. especially when you can just ally in purestrains from GC

True, but at least now you can get worthwhile Stealers.

Oh I’ve got no complaints about the GC stealers whatsoever! two more games this past weekend confirmed they are fantastic. The first curse in addition to my regular Tyranid list has been great so far!

I agree that Stealers will be different in the next Nid codex. The fluff talks about a Purestrain being different from a Hive Fleet Stealer. Such a fluffy book. I’m loving this book. 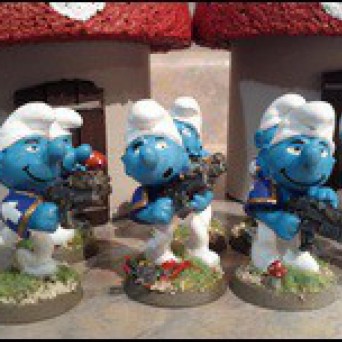 I've been pushing little plastic people around the tabletop since 2004 and have long since sacrificed my disposable income to the Games Workshop Gods. I readily admit that I am completely addicted to 40k and Age of Sigmar (and WHFB before that).

I'm a converter of anything that strikes my ADD addled mind therefore my Imperial guard are Star Wars, my Blood Angels are Angry Marines and my Ultramarines are quite understandably Smurfs.