I’ve set myself a lofty goal with my Chaos army. In November my FLGS is hosting a large tournament that is very hobby oriented and I’d love to play my Chaos army. The problem is getting all the conversions done and everything painted in about two months. I may not make it, in which case I’ll just field my Marines, but I’m going to try to push for it.

One of the last things I had to figure out was my warband’s name and color scheme and I believe I’ve finally done so. They’ll be undivided and my cult troops are being done in their cult colors as mercenaries, so those are the units I started on already since I wasn’t sure what I was doing for the undivided. I knew I wanted to do something as a play off my blog, Creative Twilight, and am working with the name ‘Disciples of Twilight’.

With that mostly settled I played around with some paint scheme ideas and arrived at this: 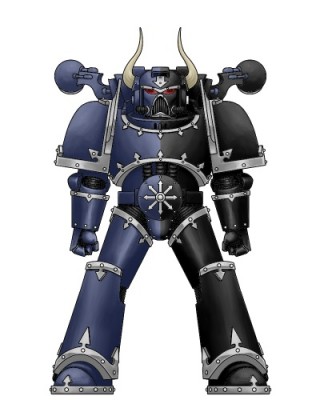 The plan is to highlight the black in the same shades of blue/grey I use on the other half. I’ve always tossed around the idea of a halved scheme and I really like the look of this. Plus, it will give me a challenge as a painter.

The last part is the logo/emblem. Once I made the above decisions I threw this together. The quality isn’t great since I did it in a few minutes. I was working out the concept more than anything.

Now, it’s time to finish sculpting and get painting.

Very cool – though the logo is a bit long. Picture it on a shoulder pad.

What I’m thinking is for shoulders just doing the crescent moon with the blood drop and then using the full emblem on vehicles and areas that are more suited to something that size.

Good plan.
Do you think you’ll get sick of painting black after including it in the scheme for the Fate’s Angels?

Nah. With Fate’s Angels the black is only dominant on the vehicles. So, it’s not as though I’ve painted up 60+ infantry models in black and all the vehicles too. Besides, I’m a sucker for black. It’s an easy color to fit into damn near any scheme and relatively little work to deal with.

I like the idea of using the crescent as the primary icon.  It will look good on a shoulder pad and also leaves you free to use the cup elsewhere on the model for added interest here and there.  It would fit well on a shin guard, perhaps to help set a squad leader apart from the rest.