Hi guys, Android here. After my last article I thought I’d follow up and consolidate on those rumours with the new info we have, so consider this part two!

The main point of discussion in my last article was the (at the time of writing) upcoming Horus Heresy Weekender. Just in case you’re unfamiliar this,  it’s when FW shows of a bunch of their completed work prior to it being available on the webstore, and you can even purchase some of the stuff early. In short, it’s a really impressive weekend that’s great for keeping a close, and dare I say loving relationship, between the company and the fans.

So yeah, I was really stoked about the HH weekender that just passed, and I’ve collected the dust after it’s settled and summarised the main talking points for you here.

The rules are typically incredibly reflective of fluff in the crunch, with Thousand sons being able to take all those psykers, and Space Wolves having their own special “saga” warlord traits to name but a few examples. It’s really nothing short of outstanding. Thousand Sons even get a unique type of dreadnought.

I think if you play either of those armies you should be pretty elated. One small note is the lack of Wolfen. For me I shrugged and said “so what,” but a few individuals are quite annoyed about this because they were present at Prospero. Still not a big deal in my eyes considering everything else you guys got so stop ya damn moaning!

There are a crap ton of models on the way

FW is not holding back right now. They showed off models for both Thousand Sons’ unique units, plus that dreadnought, a Space Wolf Contemptor, a SoS awesome transport model, a new Custodes units with guns, Another Custodes dreadnought, and a Custodes “heavy” Contemptor dreadnought (looks like the love child of a knight and a Contemptor and Tyrant Siege Terminators). I’m not even entirely sure that covers everything.

There appears to be a picture of a Resin Magnus model in Inferno, so I’d add that to the list as well. It’s rumoured his model is going to be unveiled at Warhammer fest in May. That’s a lot of stuff.

FW is really pushing these Custodes right now, and I think they’re basically quite keen to make the army purchasable ASAP so we can start seeing them on the table. If anyone’s looking to create a Talons of the Emperor Army, or has already started, I’d love to see your army, and maybe even challenge you to a game!

The Plastic Thunderhawk is swooping in

So, in the previous article I explained the significance of that picture with the thunderhawk, and took it with a whole damn bucket of salt. Well, here’s where things get kind of real. Are you ready, because you better be!

In the Q and A part of the weekend, FW was asked about the thunderhawk present in Inferno. They said that they could comment on literally anything except that image, and then spent the whole time laughing to themselves. It gave off a kind of “we want to tell you all about the damn plastic thunderhawk but daddy GW won’t let us” vibe. For me this solidifies the rumour and means it’s now a case of when.

The reason for my confidence is just logical. I mean, if asked about something that is a myth FW would have just said “yeah it’s a drawing and not a model,” and that would end the matter. However, by saying “yeah we can’t talk about that one thing,” it’s the only way you can tell the truth without leaking an upcoming product from their parent company. The whole thing is just those guys knowing a lot about it, wanting to say something, but not being allowed. So yeah, bottom line is that the plastic thunderhawk is coming! Also, quick question to you guys. What do you think the price tag on this thing will be? I’m guessing between £120-£150.

So, the Talons of the Emperor rules were released and they are seriously nasty. Lots of lovely models and just a ton of stuff. I personally expected a couple of extra things that we hadn’t yet seen, but my Lord we got the works.

What I think is most cool is the fact that Custodes are kind of like Grey Knights, super pricey models with crazy stats, but this is nicely balanced by the SoS who are cheaper than standard marines. So, you get the choice of quality and quantity in whatever proportions you like. But seriously, I can’t talk enough about how good some of this stuff is, and I’m really looking forward to seeing it on the table to see if a bunch of 70-point troop models are worth their weight in gold (get it cause they’re gold). Also as a side note, I think Sister of Silence are really worth looking into from a competitive perspective. With the release of Inferno psychic presence in, the game as a whole will increase thanks to Rune Priests and Magnus’ lads, so these girls might be your insurance against that shenanigans.

The Emperor is joining us

A couple of places in the book say things like “…can be taken if the EMPEROR OF MANKIND is present” (not the exact quote but it does mention the Emperor from an army list perspective, which is all that matters). So yeah, we are getting rules and a (model presumably) for the Emperor of Mankind. I kind of knew this would be on the cards at some point because it just makes sense, but yeah – it’s pretty much confirmed.

My big concern is we can’t satisfy everyone with the rules. The Emperor in terms of his psychic, and warrior abilities, is head, shoulder, chest – hell even legs above, the damn Primarchs. “So, make him like a 1000-point model then dude”, well here’s the thing though, he’ll be ridiculous. Like if he reflects the fluff then he will be unplayable, and will cost as much in points as a titan.

What I suggest is his stats reflect a particularly weak point of his history, say like the fight with Horus. At this point he was pretty weak, and even with the help of Sanguinius, he had to use all power to destroy him. So, I think that this way you can kind of satisfy both parties as sure he’s not as stupid strong as he would normally be. That’s ok because it makes sense. It’s a real head scratcher, and I’d love to know your thoughts on how you’d make such a model work in game?

Also, it’s really weird to think that after learning about 40k for 10 years I’m going to be able to own and play with the main character. It sort of just occurred to me how significant that is. What a time to be alive, eh!

So in summary, I don’t think I could be any happier. The Thunderhawk update alone makes me very happy. I’m just hoping we will see it sooner rather than later, so I can get one for my damn self. Also, quick side note, I’ve just totaled up my Alpha legion and have over 3000 points fully painted. I’d like to show you guys soon, so keep your eyes open for that!

Sadly, we won’t be getting another Horus Heresy book entry from FW for some time. Going on the time between Inferno, and Retribution, we’ll be looking at around a year. However, there is a chance we might get it sooner since FW went on record and stated they want to do 10-15 books as of now. So, perhaps they plan on churning them out a little faster, but who knows.

Either way, Blood Angels, Dark Angels, and Night Lords are the focus of the next book, whilst we also get the introduction of the Dark Mechanicum. I’m really excited with this one as I am interested in doing an all jump pack 30k BA army. So, this book could give me that final push.

As for the Dark Mechanicum, I think we can all get behind that addition to the game, and they could create some really cool synergy with the traitor legions. In conclusion then, it feels we’ve reached another milestone in the game, and now we’ve got the next one to look forward too. As always, I’d love to know your thoughts regarding anything and everything discussed today, so let me know in the comments below!

I’m really curious how they’ll pull off the Emperor. As you said, he’s larger than life, and putting him on the field is going to be quite the balancing act.

Yes I agree completely, I think we could see two versions possibly, one for games of X points and another for games of Y points

I hope the mythical plastic Thunderhawk becomes a reality. That would be awesome!
As to the Emperor, I’m not too worried about his rules. Either way there’ll be complaints.
I’m not liking the Forge World jetbikes though. They look like they were designed by a juvenile with a propensity for drawing naughty pictures. They should look like Sammael’s jetbike.
Anyway, I’m looking forward to Sanguinous, the Lion and Horus Heresy Daemons.

The thunder hawk is looking like a probability to me now, i’d put money on its release in the first half of this year, and yes Sanguinius is going to be amazing!

Why? These are Custodes etbikes and rather appropriately fit the unit.

Ah what is that shoulderdread??? I’ve always thought that gw/fw has a serious shoulders-issue ( I know you know what I mean: space marine etc.) but that.. I think it is a joke like “let’s see how much we can dare with massive shoulders”! However I’m waiting for Night Lords, my favourite chapter ( despite I’ve never bought anything lol), maybe some new models.

L think it’s one of the custodes dreads.

Yes the dread to me is a bit odd, and Night Lords are amazing, maybe we get some lovely narrative about Konrad on Magrage!

It is from the original art work for terminator armour. I forget the name of the mark but it had a cannon rising from between the pauldrons. 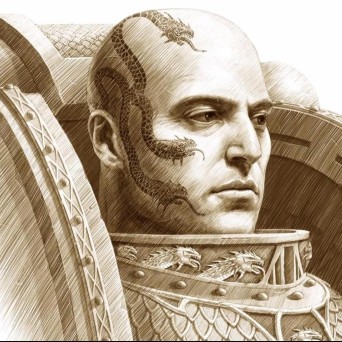 In short i'm an 18 year old gamer with an open mind and a hunger for discussion and conversation. If you agree or disagree with any opinions I share then let me know, war gaming should be a conversation after all