For a long time now I’ve been forming the vision of my marines reborn.  I’ve been tweaking my fluff to match with current canon and gathering some of the models I wanted to include.  It looks like I’m going to have some extra modeling time during July and August so I’ve decided to set a goal of a completely painted 2000 point army by the end of summer.  For your entertainment, and for my own motivation, I’ll be posting my progress here.

Some of you may remember me from a couple of random posts long, long ago.  My first army was an un-organized band of Marines and various riffraff lead by a Rogue Trader.  These eventually became Space Wolves and I played them as such through second edition.  I dropped out of the game during 3rd and returned just as 4th was released.  I resurrected my Eldar and Ork armies but my marines never quite made the comeback beyond the odd game here and there.

The Reavers, my home-grown Space Marine chapter, are of the lost Space Wolf Companies.  After being caught by a warp storm the remains of their armada floated through the warp and uncharted space for millennia and have only recently managed to return to Imperial space.  The aesthetic will be heavily Space Wolf influenced with the addition of scavenged equipment from other chapters and races.  The paint scheme represents Space Wolf markings on otherwise unpainted but well maintained armor.  I plan to post a more detailed account of the back story and I’ll be explaining some of my modelling choices along with the appropriate pictures.  The army will follow the Space Wolves codex, but I also plan to use the vanilla codex from time to time.  For now here is a color scheme example made using the Space Marine Painter from Bolter and Chainsword. 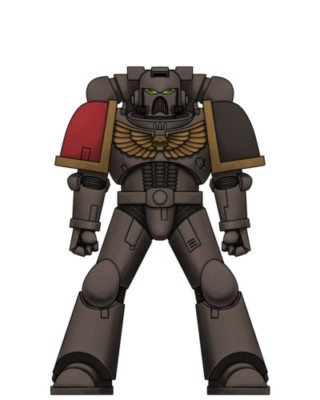