Chapter Colors
The primary color is bone with red and black as accent colors, and black inlays on the shoulders. The Chapter emblem is a scythe crossed with an angel’s wing. Each Wing (name used instead of Company), is designated by the coloring of their squad markings.

Here’s what a Tactical Marine from the 1st Wing looks like. 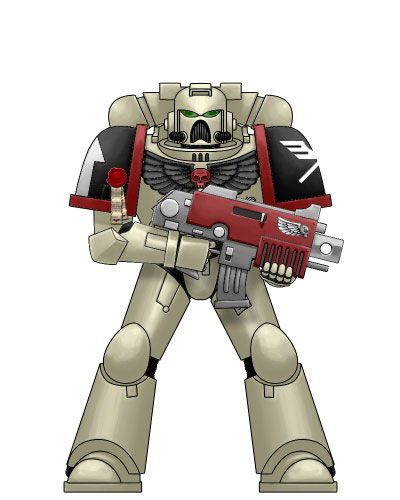 Origin
Fate’s Angels were created in the 26th founding as a successor to the Ultramarines using their geneseed.

Home World
The hiveworld, Vontulus, is the homeworld to the chapter. It’s located in the Ultima Segmentum, north of Ultramar with only a few systems separating them. The planet was chosen by the chapter founders for two reasons. One reason being its relative close proximity to Ultramar, allowing the chapter, once fully established, to aid in repelling the Tau. The second reason was because of the potential the populace presented for recruitment to the chapter.

The world of Vontulus is covered almost entirely in swamp lands. The cities that cover the planet are built on pylons that are driven deep into the soft land to support the towering structures. All around the cities the swamp lands remains greatly undisturbed and within the morass various creatures lurk. In the earliest years of the planet’s settlement these creatures were hardly seen and never ventured out of the mires. As time went on and more cities were established, the creatures began venturing into the cities, attacking the inhabitants. The frequency of the attacks became more common, often times weekly. In defense the cities began erecting large walls, enclosing the city within. Guns were erected on the walls to cover the entrances to the city and between the entrances, least any area be vulnerable.
The defenses had proven effective, however the creatures were learning. Where previously the attacks were by a single creature, sometimes two or three, they began coming in packs. Though the wall and gun defenses aided in repelling the attack, some creatures would still get through, there were just too many to destroy before they reached the walls. In response each city established a group that would head into the land around their city and seek out the creatures to remove them before they had a chance to gather and become a threat. These groups became simply known as Shields.

The determination of the planet’s citizens, their ability to face threat head on and preempt it, were qualities that the chapter founders knew would make these men into great warriors for the Imperium.

The chapter’s fortress monastery was built amid the dangerous swamp lands, away from the cities, having no fear of the indigenous creatures of the land. Those who sought to join the chapter would have to navigate the terrain, survive the harsh land and beasts, and arrive at the fortress for the annual trails.

The ability of a potential Initiate to make it to the monastery was the first step in the long process they would endure. On average only one in five who set out for the trials would arrive at the fortress, the land claiming the lives of many, ensuring that the candidates were amongst the strongest and most dedicated the planet could offer. Most of the potential recruits came from those who served in a city’s Shield, men who were intimately familiar with fighting and survival.

Organization
The chapter is not organized in the typical fashion as laid out by the Codex Astartes. First, a company is called a wing. Fate’s Angels do not have a typical 1st Company/Wing composed of Veterans. Instead, the veterans are raised up within their own wing and stay within that wing to provide valuable leadership and experience, making the company that much stronger for always having such squads in their ranks. Additionally, Scouts are assigned and trained from within a wing.

Adaptability is the key tenet for the chapter. Their unique wing organization, being both larger and composed uniquely wing to wing, allows them great flexibility in deployment. Most times a wing is broken down into talons, smaller fighting forces, for missions as a wing can be as strong as 14 squads, more than is needed for all but the most dire of engagements. A talon can be composed of as few as four squads, rarely ever less. The Captain, Librarian or Chaplain will usually lead a talon but in the absence of any of those a Sergeant from a present squad will be given the position of Talon Leader for that mission. Talons are not static and are created in response to specific threats to better deal with the situation at hand.

This deviation came about out of necessity and has remained since. Originally Fate’s Angels followed the organizational structure of the Codex Astartes. However, in the early years of the Chapter they had taken heavy losses in many of the wings, two of their wings being reduced to just a handful squads, and the 6th Reserve Wing was completely lost. Being a young chapter, the 1st Veteran Wing had only 35 Veterans amongst them and the 10th Wing only had 42 bodies between Scouts and Initiates. The Chapter could only field 643 capable of battle if called upon.

Having had Chief Librarian Unnamed consult the Imperial Tarot, Chapter Master Unnamed recalled all wings back to their fortress monastery on home world Vontulus. The tarot had revealed eminent danger for all wings. It predicted that any mission they would undertake would end in utter disaster.

With all wings back home, Chapter Master Unnamed knew he had to do something to avoid further losses and the danger the tarot was presented. So with that in mind and the reduced size of the chapter, he decided it would be beneficial to consolidate the depleted wings into full strength wings. Thus, the chapter was formed into seven wings with the Veterans composing a squad within each. In order to consolidate into seven solid wings the remaining reserve wings had to be assigned to the new wings. The 10th Scout Wing was also broken down and assigned into each of the seven wings to further increase each wing’s fighting strength.

The unorthodox composition took some time to come into its own but when it did the results are inarguable. The expertise of the Veterans, honed from countless battles, was making its mark in each wing. The Veteran Squads would lead each wing’s squads in valor, prowess and efficiency if not in word. Each wing would train with the Veterans and hone their own skill. Scouts were similarly affected once they were merged in with a wing. They benefited from not only training in a wing having its own Veteran Squads, they were also being trained in the wing they would serve with as full Astartes, and as such became familiar from the beginning of their training with the wing Captain. This allowed them to become acquainted with the style of their Captain and in turn be that much more prepared for the day they donned their power armor.

Another variation for Fate’s Angels was their Devastator squads. When the wings were merged some Devastator Squads were severely reduced in size. Instead of fielding their Devastator at a reduced number, or waiting for Scouts to move into the role, they were instead placed amongst Tactical Squads and any other squad where their weapon specialization was needed. Likewise, when Devastators are fielded as a full unit then Tactical Squads will send members to supplement the unit. This created a symbiotic relationship that worked exceptionally well. Devastators moved beyond being a unit that Scouts moved into once becoming full Astartes and instead became a unit of pure weapon specialization that was placed strategically throughout the wings.

The style of each Captain had been altered drastically by the wing structure alteration. Some wings had two Scout Squads, some seven to eight Tactical Squads, some three Devastator Squads and others three Assault Squads, plus additional tanks and Dreadnoughts, on top of the presence of a Veteran Squad within their ranks. To fully utilize the composition of each wing, strategies and tactics had to be revised and created. As a result, each wing has its own distinct approach and style.

Chapter Master Unnamed was pleased with the results he was seeing out of the newly forged wings. Having seven wings with a distinct style allowed him to assign wings to battlefronts where their style and approach would be best utilized to exploit the enemy.

Over the centuries, since the deviation from Codex Astartes and becoming what they are today, some rare individuals have taken up fate quests. Some have described it as a calling, a feeling that something is required of them yet not knowing what that is. Any tarot readings that have been done on these individuals are confusing, inconclusive and seemingly random. No two readings will match up or relate, as though it’s a completely different person being read for.

Eventually the person will feel a tug directing them in some general direction but not knowing the destination for certain. Some have undergone their fate quest on Vontulus, their home world, while others have traveled to distant systems to long forgotten planets. The specific area is different for each person undergoing the quest.

Those who have returned from their fate quest, indeed most do not, will not speak of the quest. These individuals return changed. It’s as though during their quest, or as a result of, they have gained thousands of years of wisdom and experience. Amongst the changes, and sometimes more dramatically than other changes, is their combat prowess. If a normal Astartes is an angel of death then those who return from a fate quest are akin to a god. To watch a Fate Lord in combat is awe inspiring. Their movements are sure and precise, as though they’re aware of their enemy’s intentions before the enemy is.

Regardless of their previous role in the chapter, these changed Marines become a part of the chapter council and are known as Fate Lords. Other than lending aid and advice the Chapter Master, a Fate Lord will be sent on missions with a wing. The wing is still commanded by a Captain. The job of the Fate Lord is to provide expertise and experience to the mission, as well as strike fear into the heart of the enemy while bolstering the morale and resolve of the Marines and any other friendly fighting forces they are operating with.

Battlefield Doctrine & Beliefs
Though not complete followers of the Codex Astartes in their present day, Fate’s Angels organization differs greatly as noted above, they hold value in the teaching of Gulliman. His military genius is not to be overlooked and they make thorough use of his words.

Fate’s Angels hold a respect for the ideology of fate and destiny and the Chaplains will bless the Marines before battle with the phrase, “Fortuna rector nos.”, meaning, “Fate guide us.” They are not of the belief of fatalism yet they do not ignore fate either. Each wing is assigned a Librarian who will read the Imperial Tarot to help guide their actions. Should a reading bode badly for mission, they will heed the warning and adjust themselves accordingly. Rarely has the chapter shied away from a mission as a result of a tarot reading, though it has occurred, instead they re-evaluate their plan of attack and the squads being chosen for the mission to adjust the outcome of fate in their favor.