Sun’z Killaz are an Ork warband that I created back in 2006 when I first got into Warhammer 40K. I had an old Gorkamorka army from 1997’ish that became the foundation for Sun’z Killas, my first 40K army.

Orks are an army I absolutely love. I enjoy their fluff, their aesthetic and mentality. I play them very little these days though but they remain a favorite army of mine.

Below you will find more information about the Sun’z Killaz from origin to some battle stories.

Colors
The primary color for Sun’z Killaz is black with red as a secondary color. A golden yellow is used as a tertiary color for any unit that is not a troop choice. 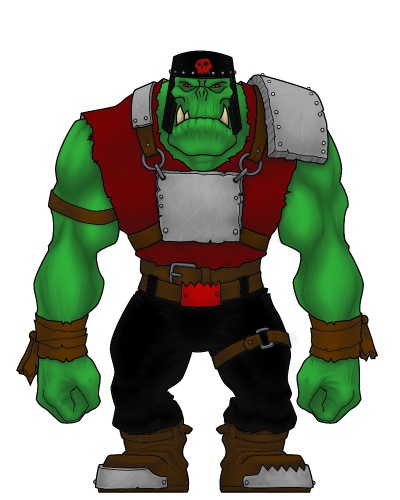 Origins
The origins of the Sun’z Killaz began on a world called Angelis. The warband took their name from their line of work, killing everything under the sun. After a while their Warboss, Prince Guldreg (though just Guldreg back then), grew tired of the daily life on Angelis. There was plenty of killing to be had, they were making plenty of teef, but he and his boyz wanted more of a challenge then they were finding. There had to be more out there, so Guldreg sent his meks to work on finding them a way off the planet and on to more interesting ventures. After some time, the Meks had created a boarder, a means of pulling a space hulk into orbit and teleporting the warband on to it. After a few months the time presented itself to make use of the boarder, so the Meks fired it up and away they went!

Having left Angelis with but a few hundred boyz, Guldreg needed to do some recruiting. They floated around in and out of warp looking for planets to attack and conquer, to bring the local Ork tribes and warbands under his heel. If he was to become a feared Warboss then he needed some more bodies.

Slowly the Sun’z Killaz began to fill up their ranks planet by planet. Guldreg, wanting his boyz to be the best, set his boyz on training missions on various planets. If they were to be the best Freebootaz in the universe then they had to learn to fight in different climates, fight different enemies, and overcome their enemy against all odds.

Happy with the results he was seeing, Guldreg began putting their name out there trying to round up some work. He was not picky on who his clients were as long as they weren’t picky about who they contracted. Like any good natured Ork, Guldreg and his boyz routinely found fights, even if it wasn’t contract work. There was the battle with Chaos in which Guldreg claimed his honorific ‘Prince’. The Sun’s Killaz were out looking for a fight when they spotted some spikey boyz. Wanting to try and get an element of surprise, the trukks raced forward without delay. Chaos was far from surprised however. The trukks could be heard miles off and the billowing smoke from the exhaust seen even further away.

The fight was long, both sides taking substantial casualties in the brutal hand to hand exchanges. It was during one of those exchanges that Guldreg and his boyz surrounded a Daemon Prince as they charged out of their trukks. Firing on the way in the boyz surprisingly managed to hurt the Daemon Prince a bit. Surrounded, the Daemon Prince and Guldreg squared off with the boyz cheering on. Guldreg and the Daemon Prince swung simultaneously with Guldreg’s big choppa connecting squarely and taking a hit in return. The blow staggered Guldreg back a bit, however as he recovered he looked up to see the Daemon Prince fading from existence and back into the warp.

The battle raged on well into the night. In the end both sides left the battlefield with what they had left of their army, neither side able to claim victory. The death of the Daemon Prince was a victory to Guldreg however, and earned him even more respect from his boyz.

With teef, and other forms of payment, coming their way, the Sun’z Killaz kept building and expanding. Their size now reaching a proper size in the millions, Guldreg has begun preparing his boyz for a Waaagh! A successful Waaagh! would prove their worth and get them the highest paying customers, so Guldreg keeps an eye out for just the opportunity.