As many of you know, I’m working on painting up my Chaos Knight. It’s a blast to paint, but one of the things I’m struggling with right now is battle damage. My Chaos Marines are not painted with battle damage. It was a choice I made when I started the army. However, the Chaos Knight upgrade kit has battle damage built into it. I have nothing against battle damage, and I love the look when it’s done well, so I have to work out some concepts. 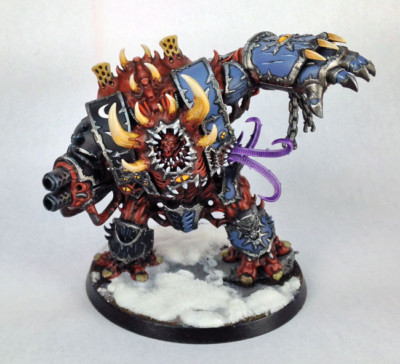 Let me explain the dilemma. My paint scheme is a half scheme. One half is black, the other half a blueish grey. So, how I tackle this needs to work on both colors, not just one. I really like the look of the more stylistic battle damage, as I call it, where you create scratches and chips using a darker base color, and then highlighting it to give it depth. You can see it on this Helbrute I did, on his Power Fist and left shoulder.

Now, the problem with doing this on black is it’s flat. You can’t create depth on black, so all you end up with is a highlight. Looking at the same model, note the black shin area. You see those stray looking highlights? Yeah, that was me trying to use the same technique on black for consistency. You can see how it’s just meh, and not very convincing at all.

Some people will do weathering and have the paint chip down to primer. It looks good, but for me battle damage is more than superficial paint chipping. Getting cut by a chainsword is going to do more than chip paint to primer; it’s going to eat through all layers down to the armor itself. That being said, just doing a bunch of spots with metal showing through tends to be flat, and not visually interesting.

I have a few thoughts. One, do a combination of the stylistic damage and the metal showing through approach. The stylistic approach I could pull off on the black in spots where I have blended it up to a lighter color, so it’s not just flat black. On the areas where it’s just black, there I could do the metal weathering. I would then apply the same on the blueish side, a mix of both approaches to keep it consistent across the model.

The problem with that approach is it might look a bit busy. I know the reality is that damage comes in different forms, and in turn creates varying degrees of damage. Some might be superficial, others with more depth, etc. However, when you start mixing so many techniques for battle damage then you run that risk of going too far, and making it confusing.

My other idea is to go with the metal showing through, but to darken it a lot. If I can get the metal dark enough, but still look metallic, then I could still do edge highlighting to give a sense of depth. The trick there is finding the right balance so it still looks like metal on the black, and doesn’t just fade into it too much.

A last idea is a mix of primer and metal. You’ll see below, I captioned it, but to have spots with primer, but you then come in with metal for the center areas, leaving an edge of the darker primer. Of course, on the black side you would only see the metal, no primer. I imagine that black would be the primer color considering my color scheme, thus invisible on black. Unless I choose to go with a dark grey for the primer, then you’d see that. I think it would look off to have a grey primer showing only on the edges though, filling center with metal, because then it would look like a highlight all around it.

I’ve done a lot of research, and I just haven’t been sold on any approach yet. Here’s some of the stuff I’ve dug up for reference.

I would love to hear what you all think about it. Jeff from Tibbs Forge and I chatted about this in the comments on the last Wargaming Bloggers Showcase, and in turn prompted this post.

I have since created my own tutorial on battle damage weathering using a lot of the above as resources and guides.

I have never really tried it to be honest, so I will look forward to peoples views on it.

Oops, wrong person to reply to ;)

I like the red primer/rusty look in that blue plate image. It’ll translate to both black and blue. I did a search for “rusty black car” on Google and saw a lot of that red color in the results.

You mean just do the red primer look for the chip, or red primer with metal inside, so the primer trims it?

Hmmm. Not sure. I think the primer trimming the metal might look odd, more like some sort of camo than damage.

I think it works on edges well, like the Deathwing Termie above, but for chips it’s tough to pull off. Primer edging metal that is.

I’ve seen some people do this on black by using a dark brown or grey where you would normally do black, and then metal inside, sort of like that Deathwing Terminator.

Been the direction I’m leaning lately.

I think experimenting with the grey under the black is interesting. It can be super subtle, it doesn’t have to be as noticeable as the chipping on the blue. Some kind of primer red-rust color under the black could be cool as well. The red you see in this pic is the factory primer, not entirely rust: http://s876.photobucket.com/user/davecoyne300/media/stug2.jpg.html

I admit, the red underneath as a primer does look good, no argument. It would work on both sides of the model as well. Grey would be tricky I think. I’d need a darker grey so it has depth to it on the blue side, but not too dark as to blend in with black.

I have the feeling I’m just going to have to setup some test pieces, not the Knight, and see what I like.

If you do the metal underneath, showing…you can add interest by adding rust streaks and buildup to some of those chips. Would allow you to break up the chips. (some fresh, some old).

I thought about that, but not sure I want to go the rust route with this model, even more subtle rust.

Don’t have to go orange rust. Just darken some areas so it isn’t the same brightness of metal. Rust has many forms!

Fair enough. What other colors might you suggest though?

Another way of solving this in the future, is don’t use black as black. Find a darker tone that isn’t black, but reads as black. Then you can tone up and down. Lotta work to do that though!

Yeah, that’s what @toddb012:disqus has been doing. I like it, and it works for sure, but for me I like the black. Going black lets me use that blue from the other side as my highlight, a color I blend up from black. I just like the way it works out. Using a darker grey wouldn’t work to accomplish that as I’d really need to stick to grey tones.

I’ll have to play with some purples and do some image hunting. Thanks.

black is a tough color all around. Going off Greg’s comments, you could always go for a more demonic approach and give it some purple or red tones underneath, almost as if it were bleeding.

Yeah, black is one of those colors that always gives you issues. I can’t help it. I don’t like to do anything the easy way.

I’m just going to goof off and see what I come up with based on the feedback. I plan to paint some test pieces and see what I like. Theory only gets you so far.

I’m not really sold on the exposed primer idea. The whole point of primer is that the paint sticks to it better than to anything else so it would be rare for the paint to be chipped off the primer. Exposed primer is usually the result of rubbing over time. It could be an effective technique where there are cables or something dragging across the armor. Primer could also be exposed by exposure to some solvent that dissolves the paint faster than the primer but that’s probably not a common combat occurrence. Chipping caused by impact will expose the underlying material and may even have removed some of the underlying material. Chipping caused by exposure to the elements will also expose the underlying material which would likely be corroded to some degree.

If you’re not interested in rusted damage I would lean towards exposed metal. Try applying the chip in a darker metal like Boltmetal. Then touch it up with something brighter like Mithril Silver so the darker metal around the edges adds depth to the chip. Then add your highlight like you have with the other chips.

Or you could just do the chip in one metallic color. Then when you add your highlight leave just a little black on the metal side to indicate the shadow.

Yeah, that’s pretty much how I’ve always seen it too. I try and strike a balance between realism and artistic freedom, but some things are hard to overlook.

The darker metal approach is how I’m leaning. Do as you said, but also on larger enough chips, do a shadow at the top of it to aid in giving depth on the black side.

Dryad Bark is color I don’t yet own. I imagine it’s a brown?

Yes sorry it’s a gw colour or any dark brown would do it.

I sponge on dryad bark and if i feel the need to some ironbreaker. Quite simple and effective