Things have been busy lately on all fronts so I figured I’d just dump some random stuff up here as an update.

This event is on May 23rd, weeks away, and I still have a lot of work left to do. I’ve finished one of the three missions, the second is partially done and the third just an idea. I’ve received lists for the event and have been reviewing those the past few days. I’m also still working on the trophies for the winners and that’s eating up a ton of time.

Speaking of, I showed a shot of one of the pieces I did, here’s a shot of another one. 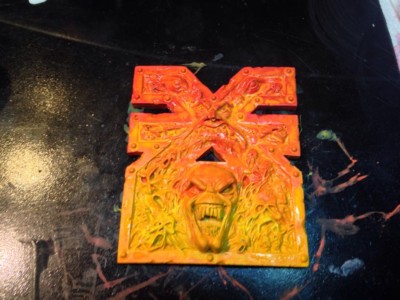 As you can see, the paint is very wet. I took yellow, orange and blood red and just washed them all together into the paint soup you see. I forgot to take a shot of it dried.

I’m working on the plaque these will go on, of which I have eight, and I also still have to paint five more of those parts that go on it. So much left to do.

Saturday was supposed to be a 40K tournament at my FLGS. I headed there and only six of us showed so we decided to just play casually instead of paying an entrance fee for six of us. It was a nice change of pace. We threw some dice, drove to get lunch and came back to throw some more dice. Only thing that would have made the day better would have been beer while gaming.

My first game I played against the new Eldar. Thankfully the Eldar list wasn’t all cheesed out with all the stuff the internet is raging about. I of course had my Khorne Daemonkin and was curious how it would fare against what I would consider a hard counter to Khorne. The answer in this game was surprisingly well. I had a solid early lead, at one point being up 8-2. At the bottom of turn #4 he started to turn things around and when the game ended he had me by a few points. Both our armies were brutalized with a few models each remaining. It was a great game and nice to see that an assault army can hold their own in the face of Eldar guns.

My second game was against Orks in a pure bloodbath. Long story short, he had a big blob of Orks that made up most of his army. He had Big Meks in there, a Warboss, Weirdboyz and a ton of Boyz. I spent the first two turns positioning myself to slam into it on turn #3 and that’s exactly what I did. Flesh Hounds with Chaos Lord, Berzerkers with Herald of Khorne and Bloodletters all dove in and mauled the Orks. Unfortunately I had to run before the game could reach its natural conclusion and we ended on the bottom of turn #4. At that point I was up something like 6-2.

It was a fun day with two great games.

I probably won’t have many updates while I continue to whittle away at the Fratris Salutem but soon, I hope, things will get back to normal.

That Ork supermob is a tough fight. I threw a couple Dreads and an Assault Terminator Squad (led by a TDA Chaplain) into it last month and barely won. I only got the upper hand because the mob is so ponderous that not all of its models can fight in any given turn.

Yeah, it’s a beast. My last time against it I had hit it with 3 squads then too but he eventually won out. My saving grace this game was I used the Blood Tithe for +1A so I gained around 30 extra attacks on the charge and still had it for whatever I had left in his turn, which was most of it because of those bonus attacks.

Sounds like he was playing a bit on the less competitive size, as there wasn’t mad doc in that mob giving them all FNP and making them fearless. Then trying to roll santic to get hammerhand on the weirdboy. If you get the FNP, fearless, 100+ boy mob with hammerhand, everything is pretty much dead.

He did have a Painboy for FNP, forgot to mention that. He also had
that artefact bosspole that makes them fearless. So, same effect but
without Grotsnik. It wasn’t 100 Boyz though. He had 4 Weirdboyz and he had Hammerhand in the mix. I managed to shut it down the turn before I charged though :)

Three full Khorne units, two with hatred, and all +1A from the Blood Tithe hits like a train.

Gah I have faced a large ork blob with a painboy and boss in the middle (+4 armour too). 3 large blast s6 missiles went into it plus 2 gunboats worth of splinter rifles and I killed 9 boys! Lolz the game went downhill after that, he krumped me :D

Yeah, who would have thought Orks were so damn resilient.

Glad to hear the daemonkind list is doing well! My fav games are the ones where both sides are holding on by just a scattering of models. Means both players were pretty closely matched, and the dice were back and forth for both players! As time goes on, I am getting more and more excited about running a khorne list. I might just make up a 1k list for local games to play!

I agree. All of my Khorne games end that way. Whether I win, lose or draw, both sides are seriously butchered and I love it.

Great to hear how the list is faring against more types of opponents. Gives hope that GW is thinking lists through a little more.

Sssshhhh. If they know we approve then they’ll screw it all up on us again.

I bet they have search filters to look for things working correctly, those they will FAQ so very fast *hides*