Well the annual event has come and gone. I had an absolute blast. It was great to see familiar faces again and get a chance to catch up with friends.  I know Tony already did a quick recap of the event and for the most part I will completely agree with him. This was probably the most well run of all of the Standish Standoffs everything ran like clock work. I had 3 great games and went 1-1-1, also according to the website I tied for best painted army (though there was no award for that, which I found odd, previously I think there has been). In total points I tied for forth, which is great in my book.  I think I was third in soft scores some one docked me on sports not sure why but maybe some one was just giving 4s.

The bronze spawn competition was some what of a sack of potatoes for me, I am not sure if I should even call it the bronze spawn as the signature trophy was missing . I have trouble finding the right adjective, the results to me weren’t entirely unexpected, but they were still somewhat disappointing. I am not going to post picture comparisons or anything and my only real gripe was with one category, I could see where judges were coming from in the other categories. I have always found the judging for the competition all over the place but in my gripe category I went to facebook and found the winning miniature, and I don’t see it, I just don’t see it at all, there are a hand full of models that blow it away. But again after the last few years it wasn’t entirely unexpected.

Anyway I won best vehicle, I lost out to thor in the 25mm category. Eisenhorn got beat out to Thor’s soulgore (which I entirely expected that model is awesome) in the 60mm.

Complaints aside it was still a great day. Seeing all the army’s really gave me the bug to dig back in on my white scars. I have been wavering around on an ally and after yesterday I finally decided. I saw 0 miliatarum tempestus on the field. I love the models and I have been wanting to field them for awhile. I think next year they are going to be my big project. I want to add a platoon of them to my white scars force.

So to help make that happen and to make some space I am selling off some of my competition paint models (I am not going to play with them and my hope is some one else can get some enjoymen. At this moment I have thrown the knight titan up on ebay as well as Inquisitor Eisenhorn. The price tag on ebay is pretty high but if you are interested I would be willing to part with it for the astra miliatrum box here: (not sure if that can be found cheaper or not but thats what I am after with the knight titan).

Here are the ebay links: 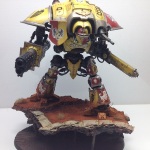 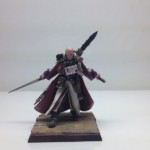 Over the next week I will be putting up snikrot, an imperial fists captain, dark angels chaplain, and an imperial guard sentinel. They are all painted well and if you are interested in any of them feel free to shoot me an email [email protected] I much prefer to do deals off of of ebay (works better for everyone).

Thanks everyone I am looking forward to the next big event in may, but I won’t steal Thor’s thunder.

In the past we’ve had People’s Choice (best soft scores), as well as Best Painted Army. Then of course the painting awards were lacking this year in terms of what they were and the fact we had no 2nd place. I understand that B wanted to spread things around more this year, give more people the ability to walk away with something, and while I do not fault that, it still kind of sucks. I honestly believe people would rather walk away with an award they earned than a random draw. *shrugs*

Anyway, good job on the day. I had not realized you placed so well. I was surprised to myself 9th overall considering the ass kicking I took the 3rd game but that just goes to show how the structure of the event works; that winning isn’t everything.

Nice overview. I would like more photos though, but I’m a photo addict and I love looking at mini’s.

I would not want to be a miniature judge. I listened to misterjustin as he discussed how he approaches mini judging, and it was a series of “no’s” followed by looking at a handful of models.

The no’s being a generalized overview of the models. Looking at everything from prep (mouldlines, flash, seams showing), bases (resin vs constructed or merely flocked), composition (interest, good eye movement through mini), paint (drybrush vs blends, # of highlights, shading, NMM), to technical (effects, OSL, Gore, etc).

They would apply a general term to the entirety of the models being judged, and quickly eliminate major sections of them.

So even if a model was spectacularly painted, if they hit up the “does model have visible mouldlines/seams” and it did, it would be eliminated from the top tier judging. It was brutal to watch. Models that I would need another 2-3 years of practice to obtain were moved to the side for extremely minor technical flaws.

My model in particular, was moved right off of judging almost immediately, because it was on a resin base, and given the choice between someone who made their base from scratch, and one that was merely painted, mine quickly received a no.

I won’t say that the job of miniature judging is easy and I don’t want to post the particular photos because not only does it sound like sour grapes it is just rude. I mean talking about it period puts me on edge (I don’t want to make any one mad, because I genuinely enjoy all of the people who compete in this). But even if my particular model was not in the category there are 2 or 3 others that are hands down sharper jobs than what won. In this event it isn’t like choosing between a Todd Swanson original and say something jarhead (of massive voodoo painted). I really like studying what wins so I can figure out what to do better, but in this one circumstance I came up with a big can of how the hell did that happen.

It would have been nice to see second places and honorable mentions announced as in previous years even if there was no award for it. The gripe with the prizes I have is trophies for painting were promised and not delivered. I don’t need a trophy I have plenty, but if you promise something I feel you should follow through on that.

Any who it was still a great time. I think I had more fun at this standoff than any previous one.

Interesting read. I had hoped to paint a bunch of different things for the event but ran out of time to do that. I think we all get attached to our own projects. Frankly I prefer a format where what you paint just goes on display for the day and is not part of your play list. Reason being it’s hard to find time to really go and see what is being displayed. Ever been to a games day? You enter the painted model and leave it for the day….overall I loved the missions. My own experience made me wonder if they were leaked. Two of my opponents had essentially no source of bonus points! Looking forward to the Spring event….

I can 100% assure you the missions weren’t leaked.

Congrats on the game play and painting! It isn’t terribly surprising that some of the more subjective judging might fly into left field. I imagine these things aren’t always based on the same criteria in everyone’s mind. Still sounds like a pretty great day!