Streaming & Video on a Budget Using a Phone (Miniature Hobby)

An area I’ve always struggled with in getting Creative Twilight out to a wider audience is video production. Blogging is a niche these days and video content has taken over. Video is something I’ve always wanted to put more effort into but I never gave it a real chance.

Finally deciding it was time to work on video seriously, I set about getting a setup that would work but not cost a lot of money. That meant using my iPhone for shooting the video since I couldn’t afford to buy a camera.

I knew I had to get some stuff to make shooting on my phone as good as it could be. I already had a good light for painting, so that was taken care of. That left getting a microphone and a camera stand that would work for overhead shots at the very least.

I had done some streaming without a microphone and relied on my phone’s mic. It wasn’t good – no surprise.

I had also tried using the ear buds that came with my iPhone. Those actually work relatively well. The only issue I was running into was the short cable and the fact that any movement would “bounce” the mic around a bit, jostle it. That would translate into annoying sounds in the mic and to the viewers.

So, if you’re on a really tight budget then give those ear buds a shot. For me though, I move around to reach for paints, brushes, move lighting, etc. The ear buds were pretty much a no-go.

I went in search of a microphone that would work for me and found a lapel mic. This was very well reviewed on Amazon, watched a few videos of buyers using it, and the price was really reasonable.

The audio cable isn’t overly long, but it’s around 5 ft. which is plenty for me since I’m sitting at my desk and really just inches from my phone/camera.

With the audio squared away, my next purchase was a mat to go on my painting table. A friend of mine had pointed out during a few streams that the camera (phone) wasn’t focusing on the model but instead the table. It made sense because my painting table has a glossy finish and just bounces a lot of light around.

This is the item I spent the longest time looking for, a mat. I won’t bore you with all the ones I looked at, but I ended up finding a neoprene mat on Walmart.com for $12.

The mat is 24″ x 16″, so it’s the perfect size for my painting desk. It covers the entire area I paint in to prevent glare, and it’s rather comfortable too. It is really matte, which is exactly what I needed.

It’s also anti-slip, so no issues with this mat sliding around during shooting.

Of course, if the surface you’re shooting on doesn’t have a glare, then you can skip this item and save some cash.

I had been using a traditional camera tripod for my videos. It’s a small one, around 18″ tall, and it did the job. However, while 18″ may not seem very tall, for miniature painting and using a phone as a camera, that’s quite the distance.

I needed to get something that could get closer to the miniature while I painted. I had tried zooming in during a stream and a video tutorial I did. It worked but the quality wasn’t on par with not zooming in. Plus, it just seriously reduced the frame space I was working in and it was hard to stay in frame while painting.

After a lot more research I arrived at this particular video stand. I liked this one because it has a lot of articulation with it. The biggest thing though was with that articulation I would be able to have my phone facing forward and get the same view I do.

See, prior I was shooting with the tripod beside me. The view of me painting was sideways basically. While nobody complained, I knew it wasn’t ideal and I wanted something that gave an overhead and from my view.

This camera clamp (figure out what to call this) allows me to get close enough to the model without zooming and faces the correct direction and from overhead. Basically it’s perfect.

Here’s a video from Facebook Live I had done with the tripod and no mic (using the iPhone mic).

And here’s a video with the new setup. This was a tutorial I did for painting marble. Pretty significant change!

Clips on for easy use

Doesn't get in your way

I just wanted to share some cheap things I picked up that have really improved my video production. I spent a little around $63 for everything. If you don’t need the mat like I did, then you could get away for about $50.

For even cheaper, if you can use your phone’s earbuds, then all you need is the camera stand. That’s the one item I feel is required for this type of setup. You can use a tripod as I did for a while, but if you want the video to be shot from overhead and at the right viewing angle, there’s really no way around it.

At this point I feel I’m covered pretty well and the next purchase, down the road, would be a camera. For now though, I’m going to continue shooting on my iPhone and learn how to get better at creating videos. It’s like anything, it’s all about practice! 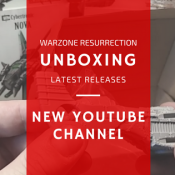 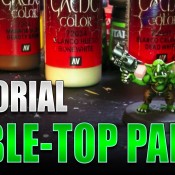 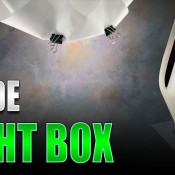 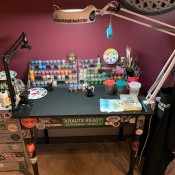 Id like to stream cause i am done with editing, but the equipment and tech skills for twitch seem intimidating. this looks like a nice way to dip a toe in with some FB live or insta live content. Thanks for the links :)

I haven’t tried Twitch yet. I think it’s great if you plan to take the streaming seriously, but since I’m just goofing off FB has been fine. You really just push a button and go. It also means you have very little control over quality or anything which can be annoying.