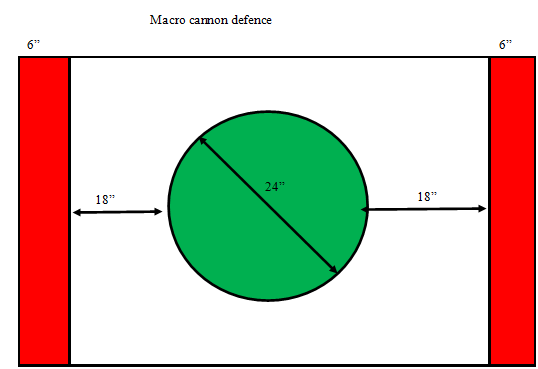 At this stage the imperial forces had gained 6 stockpile and the alpha legion forces had 3 points of chaos. 3 Stockpile was used to provide wall of martyrs defensive barricades and two 5 man Storm Hawk (space wolf) grey hunter squads. The 3 Chaos provided the alpha legion player with 3 15-man cultist units.

Each force was assembled separately and neither player knew what the other was bringing. Flyers, jump infantry and skimmers were banned and a wind direction mechanic is in place to represent how much the wind is affecting the battle. (see below)

Roll a scatter dice at the start of the game. This is the wind direction. This has the following effects troops running against this suffer a –1 move penalty. Flamer weapons cannot be fired into the wind unless they are torrent which will scatter 2D6 minus BS in the winds direction. When firing in the same direction as the wind normal template weapons gain the torrent rule while torrent weapons add 2” to the torrent distance. All ‘Blast’ weapons suffer a further 1” of scatter in the wind’s direction (regardless of normal scatter roll).

From turn 2 onwards the macro cannon can be fired on a roll of 4+ but only if a unit is controlling it. This shot will then be fired from a fixed point on the planet in the battlefleet gothic game that follows. The macro cannon to show that it is in a defensive position and is reinforced can only have hull points removed by penetrating hits and has a 5+ invulnerable save. If the macro cannon station suffers a penetrating hit from the sicaran venator the to fire roll becomes 6+ on the next imperial turn.

All imperial forces fall back towards the macro cannon. Night fighting is in effect for first game turn and the alpha legion move first unless the imperial side can seize the initiative.

Armillus dynat looked around at the interior of the rhino. The wind howled around it as the alpha legion moved into position. He hated to have to left this site intact for this length of time but in order to destroy the cannon it needed to be armed and the magazine needed to be filled.

The only time this would occur is when it was to be used. Initially the plan had been to seize and turn the enemies weapon against them but this had failed. The firing codes were now all in imperial hands. These imperials were about to face a harrowmaster in battle. Dawn would break in forty minutes and with the wind shriek disguising the engine noises they could get really close before they launched an attack.

The proximity alarms had been proven useless as the wind had kept setting them off. Visuals had been reduced to less than fifty metres by the rising sun as the mist refracted the light. A ring of bodies surrounded the macro cannon site. The storm hawk squads were waiting in their rhinos as the first coordinates started to filter down from the fleet above.

The wind picked up and the mist was pulled away revealing the Alpha legion forces. Rhino engines roared as they speed forwards cultists flowing behind in a wave 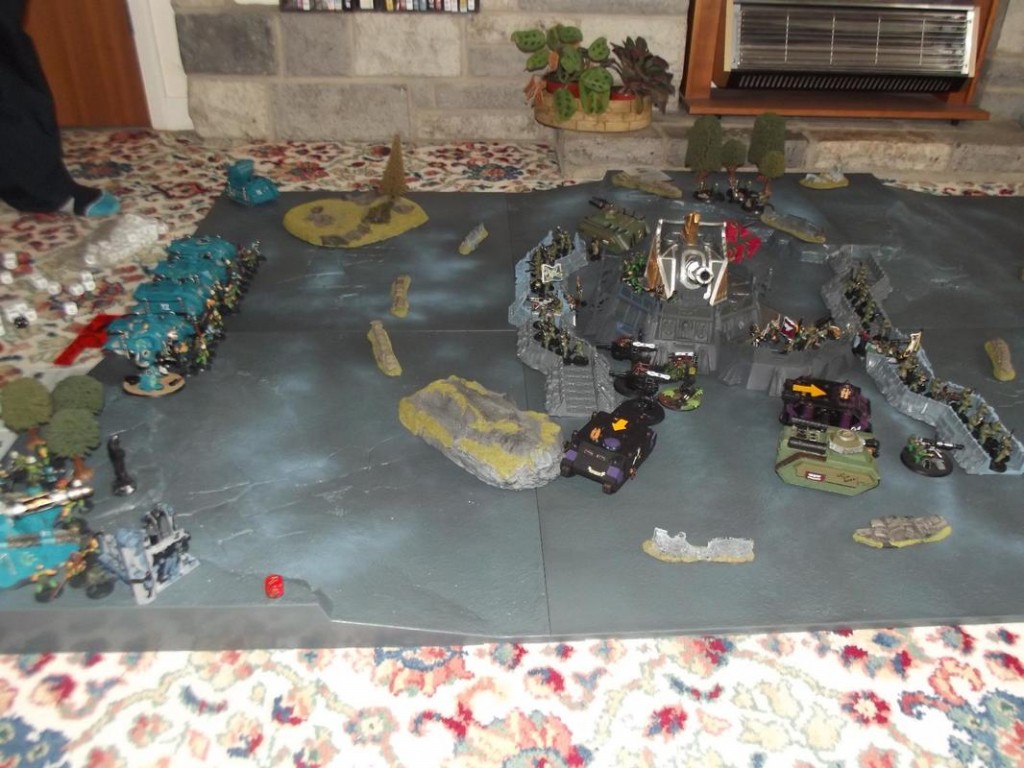 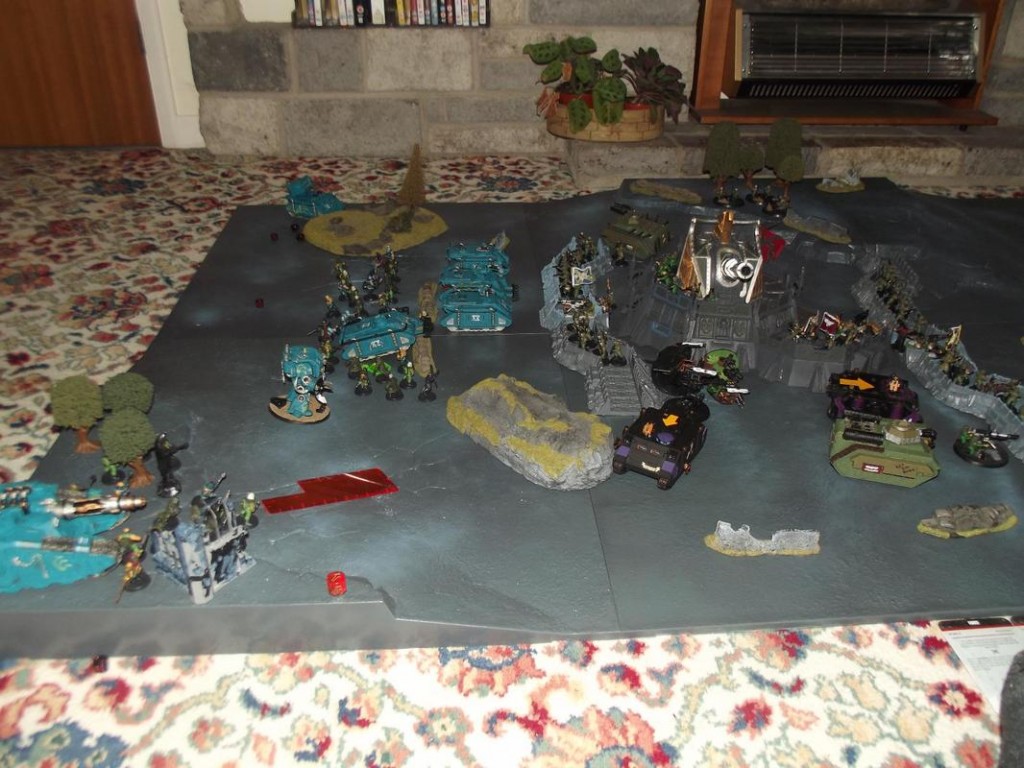 Failing to grab the initiative from the Alpha legion the chaos forces surge forwards. Shooting was mostly ineffective beyond two scout sentinels and a primaris psycher being shot dead. One rhino became immobilised while the other three moved flat out to get closer to their objective. 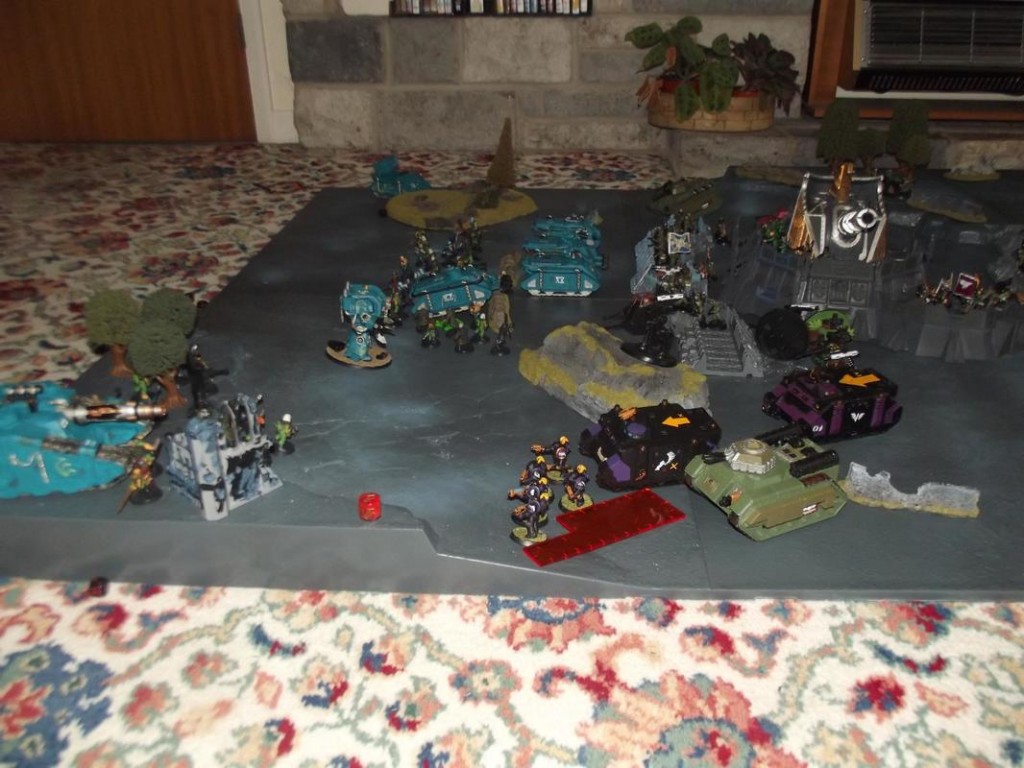 The imperial forces move to redeploy and counter the forces of chaos. 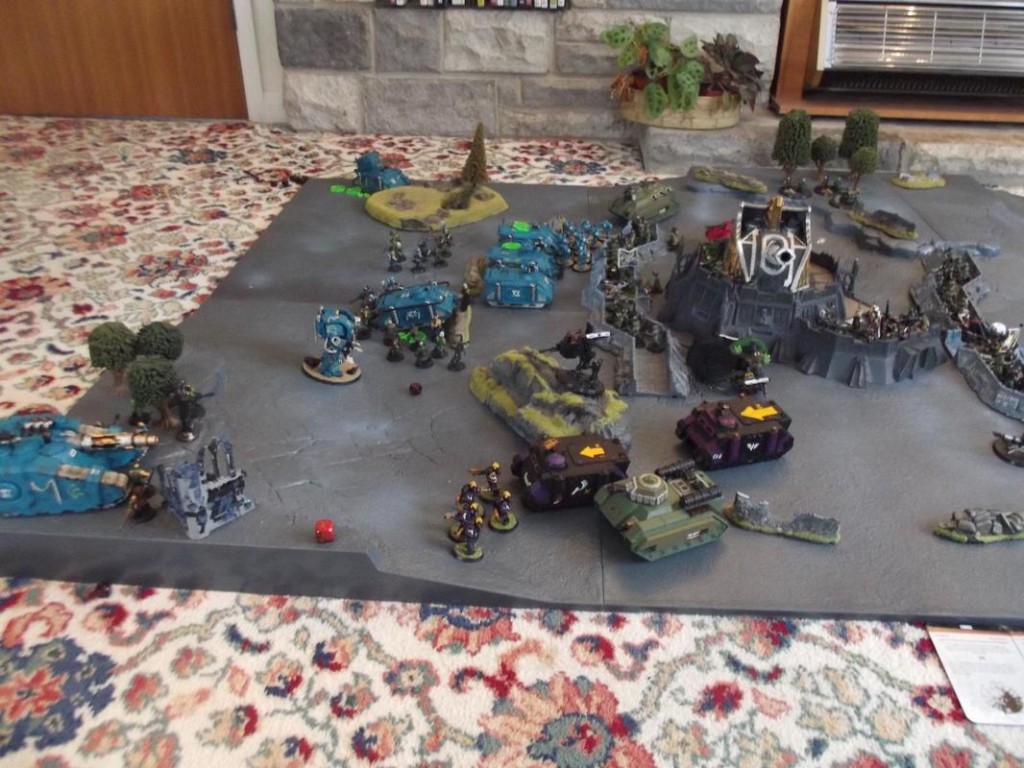 One rhino is destroyed as the whirlwind takes damage putting it out of action for the next game turn. 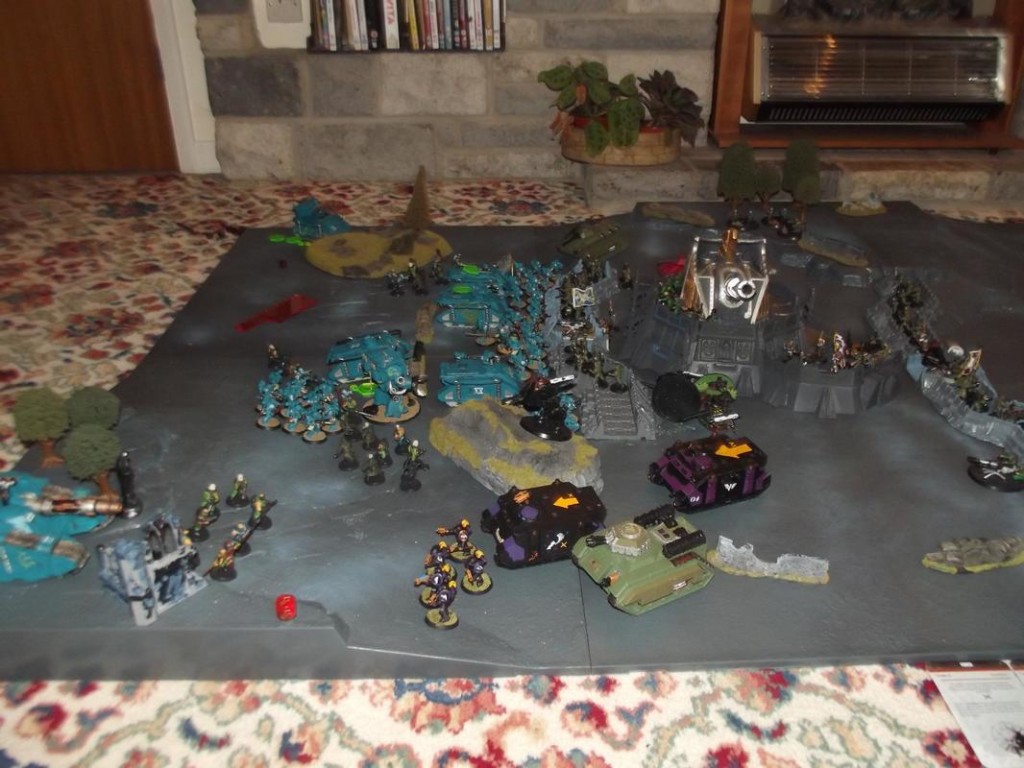 The alpha legion disembark from their transport vehicles but are unable to breach the imperial line due to the high number of imperial guardsmen present. 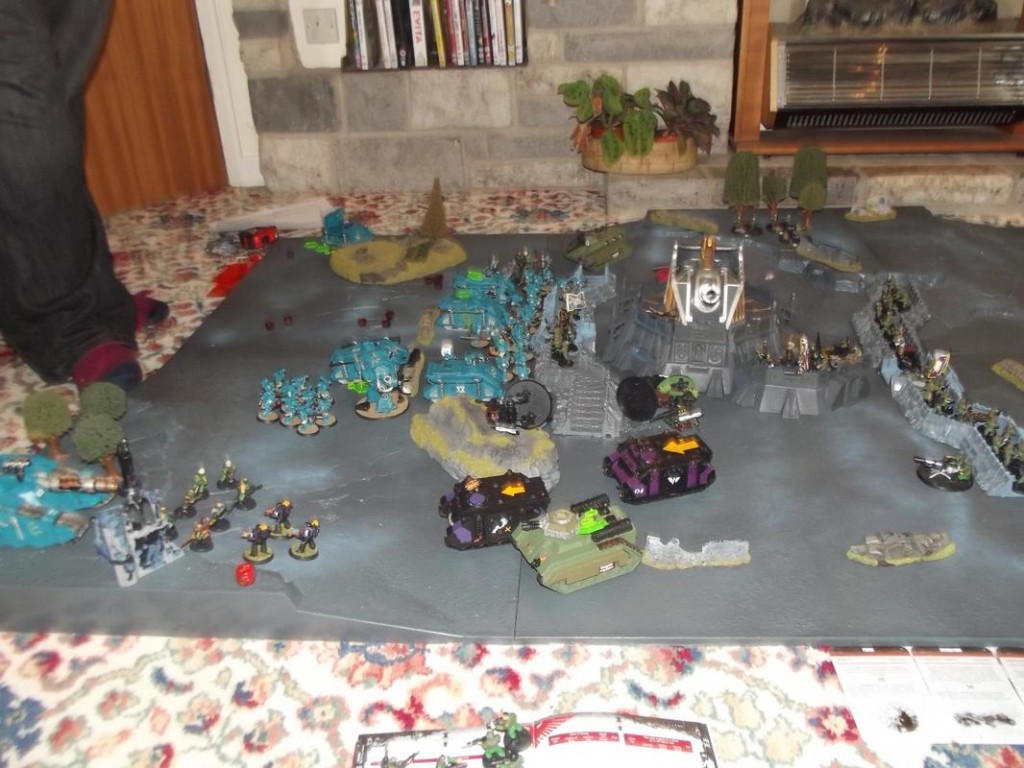 Having survived the alpha legion shooting (thanks to the wall of martyrs) the imperials rally and attempt to counter attack. The macro cannon is fired off into space. 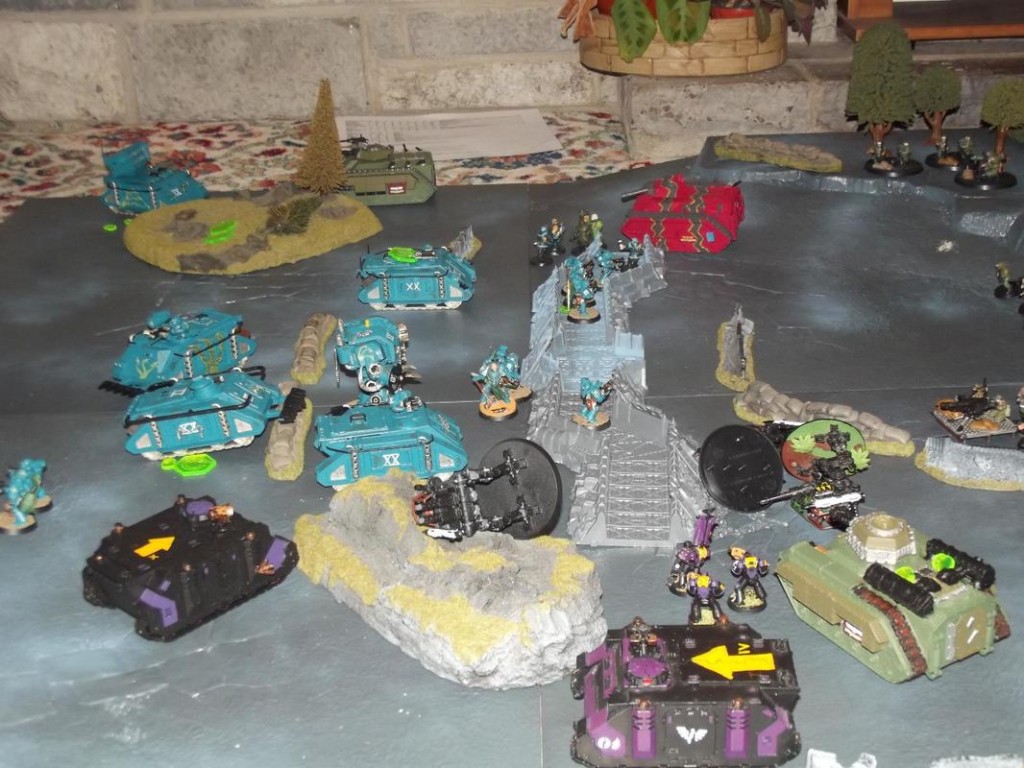 At the end of the imperial turn, one alpha legion unit had fled from a tank shocking rhino and another had been sent running from shooting casualties as the storm hawk combat squad cleaned up the squad of cultists. The imperial guard had done well in close combat due to their psycher inflicting an all hits are rending malediction on the alpha legion unit they were locked with. But the route is now clear for Dynat and his meltagun tactical support squad…. 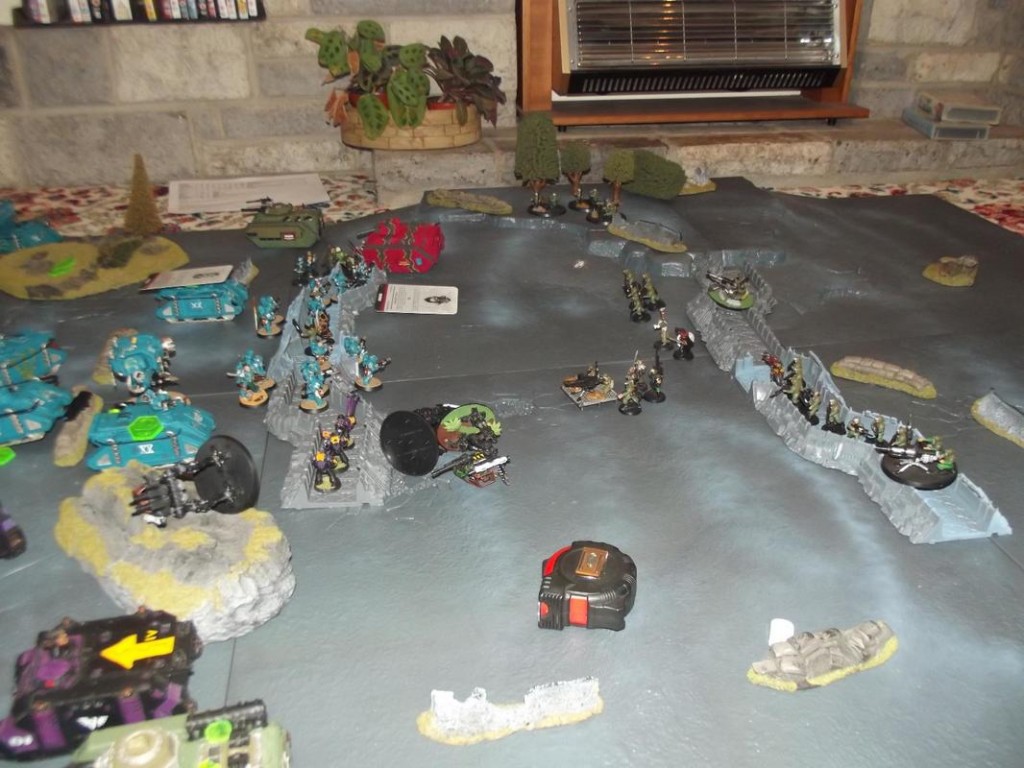 An exemplary round of shooting results in the macro cannon battery being detonated by a lucky meltagun shot. (that and the harrowing ability of dynat negating the massive bulwark rules negative modifier vs damage rolls) The blast kills a fair few imperial guardsmen and even some of the alpha legion who were still under the effects of the all hits are rending malediction. 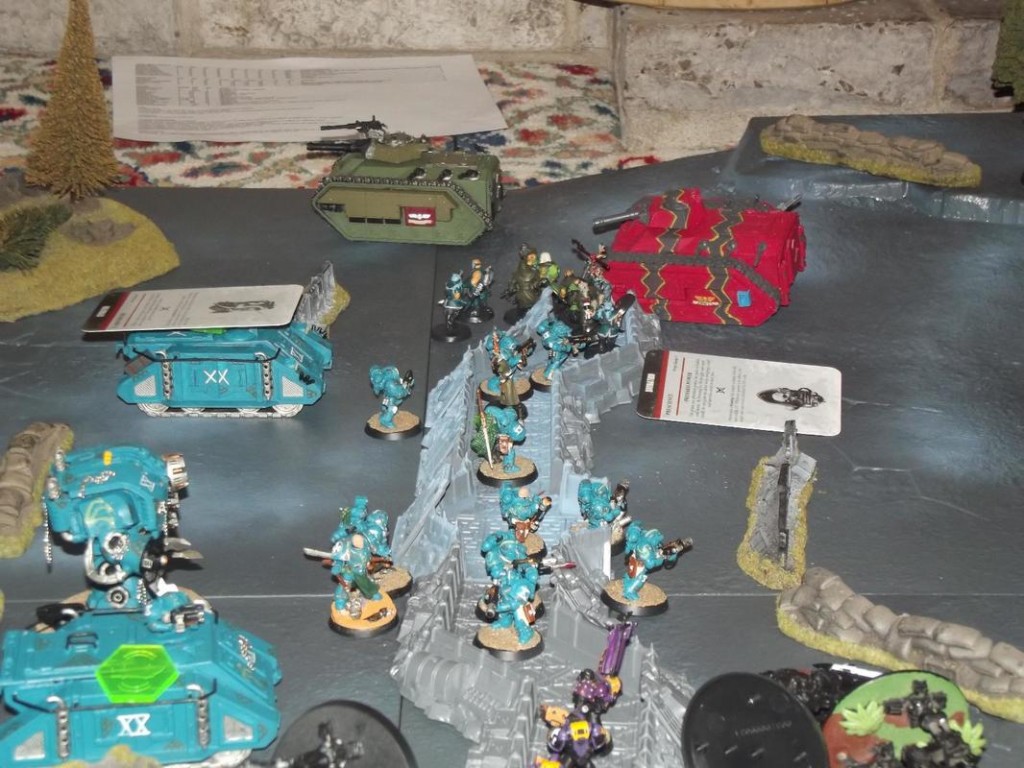 The imperial forces muster to try and enact vengeance for the destruction of their macro cannon. Which results in 4 meltagunner casualties. Armillus’ leadership hold them in place.

Fire continued to be traded although the exchange was light as the imperial forces pulled back using their transports to speed up the process while the Alpha legion with their objective complete also withdrew taking their dead with them.

Armillus Dynat reviewed the area and situation from the top of his rhino. He could see the Storm Hawks covering the imperial guard withdrawal. His leviathan dreadnought stood nearby as the surviving members of his taskforce worked on restoring the rhinos to mobility.

The storm hawks had banded together and were riding away from the battleground in one of their rhinos, the other having been used to help the guard evacuate. With the macro cannon now destroyed there was no reason to fight. Better to pull back to fight another day. The casualties they had suffered had been placed into the rhino’s crew compartment as it increased its speed to catch up with the other transports. The storm bolter barked.

“Stray cultists. We are heading to mustering site 12. Its four-hour’s drive from here.”

“It will be done”

Ten minutes has passed since the macro cannon had been destroyed. All that now remained at the site where the bodies of the cultists and the guardsmen who died. The wrecked alpha legion rhino was no little more than a collection of small scraps with the alpha legion having detonated it to keep it from enemy hands.

The wind picked up again blowing ash and metal fragments over the ruined location.

Now that was brutal and funny. We had a full ten-man alpha legion tac squad flee the table after a rhino tank shocked* them a unit of guardsmen outfighting a second tactical squad (reducing them down to 4 men over a few turns) and the third tactical squad running from guard shooting after losing three models. The leviathan dreadnought did very little beyond absorb fire while the sicaran venator struggled to injure vehicles.

[*We gave the rhino a rule that provided it with a -1 to enemy LD tests when tank shocking for the rest of the campaign as recognition of its prowess.]

Next time I will run through briefly what occurred during the game of battlefleet gothic and show the outcome of the planetstrike mission conducted afterwards. Morale tests are funny like that, they either seem pointless, or your whole army starts running.

Nice job taking out the cannon.

Thanks.
Morale can still break your army and plan (although given the amount of ‘fearless’, ‘stubborn’ and the ATSKNF rule holding models in 7th ed 40k not that much when compared to 30k). The Rhino earned its recognition and a unique boon for its feat.
Still it was a very Alpharius approved strategy by the Alpha legion player to strike at the weakest point of the imperial defences by concentrating his forces on one side of the playing field. [Which happened to have less lascannons]

The Rhino indeed earned glory. Did it get a name too?

We called it Infamy and made up a back story to state that due to its highly aggressive machine spirit it roars like a beast when charging into the heart of enemy formations. (adding to it causing a -1LD for tank shocking its victims)

Well played and a fun read. Cheers for sharing.

Thanks Rory,
There is more to come.