Set up to allow the imperial side to reduce the incoming number of chaos fliers. This mission is focused solely on Fliers. First lets run through the mission overview and special rules. 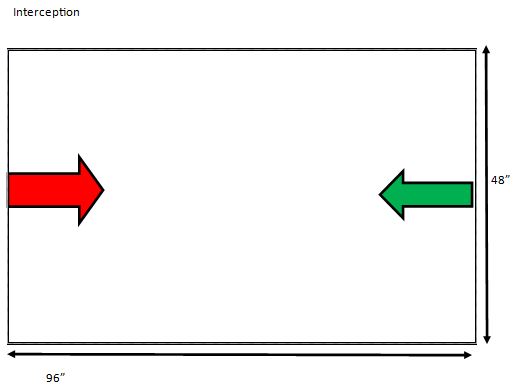 The chaos advance is the red arrow and will constitute all their air force. The imperial forces move from the green arrow point

For this mission flamer type weapons (heldrake baleflamers) cause D6 hits but must roll to hit as with a normal weapon.

Bring it back around:

If any model (bar the marauder destroyer if it has survived) would leave the table they instead perform a bank maneuver and can perform a 180 degree turn and then complete their movement.

If the marauder destroyer [provided it has survived] leaves the table via the side the imperial forces originally entered from it can be used in the following mission by the forces of chaos. Arriving with the same number of remaining hull points on the turn it escaped.

For each turn the fliers are fighting here they cannot join the final mission but when they do any surviving fliers can enter from any table edge when they do arrive. Fliers will arrive on the turn after they finish off the enemy retaining any hull point damage they have suffered. No damage results will be applied but explodes results will still destroy the flier as normal. (we are using the apocalypse vehicle rules ammendum)

This mission carries on until all the fliers from one faction have been destroyed.

Quick note on our house rules:

If a flyer moves over an enemy they can shoot at them hitting their side armour. In addition line of sight and shooting ranges can be taken from any point along the fliers path. (We are using the old school forgeworld flier rules as we prefer them)

Quick note on Baleflamers. They can be used to target enemy fliers in this mission they have D6 shots but must roll to hit with each when attacking using the heldrakes BS value.

Chaos has first turn with the imperial forces beginning their interception shortly afterwards.

“Ten minutes to strike zone.” The daemon controlling phoenix ember shuddered as the vox lit up indicating the distance to the target location. The chaos ground based relays sent a second ping. “Enemy on intercept course” 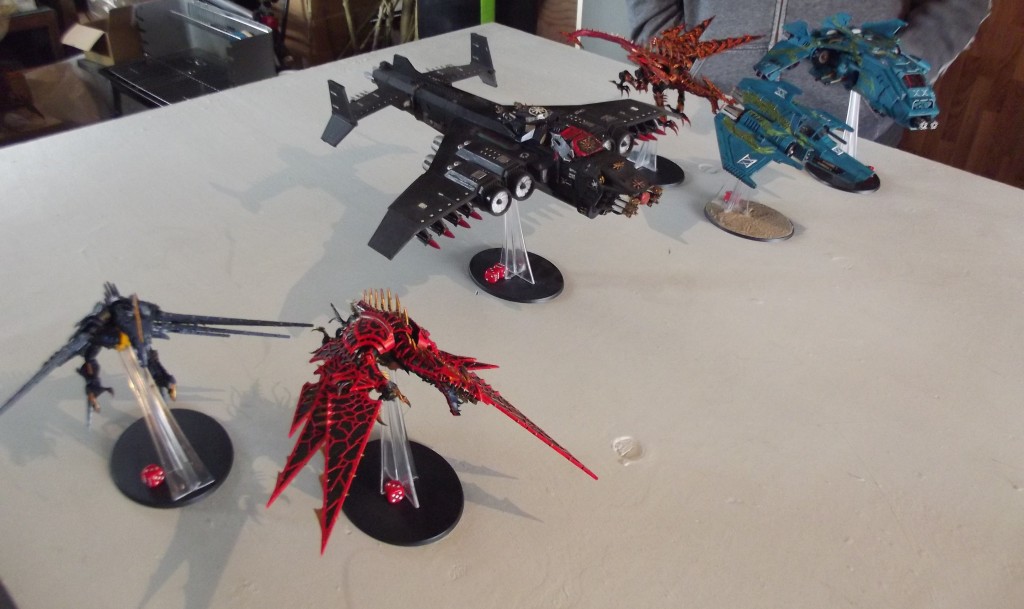 The chaos airforce moves towards the distant battle. 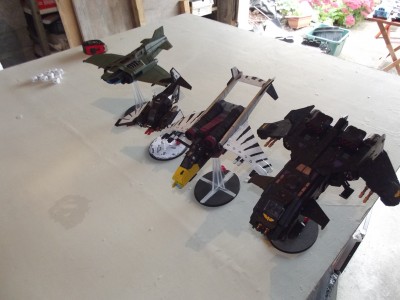 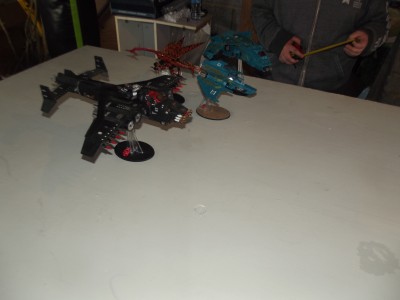 Two heldrakes are wrecked as the imperial units focus their fire. 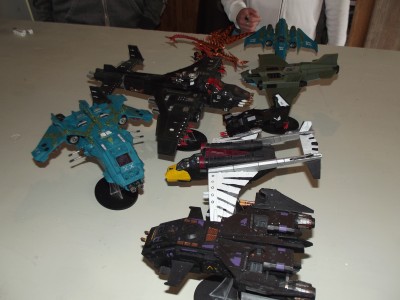 The chaos fliers move to engage the imperial airforce. 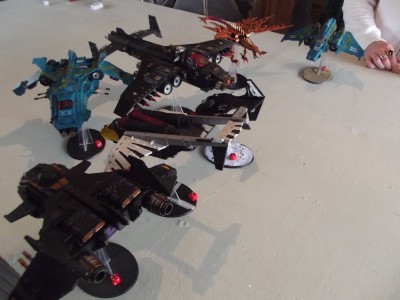 The thunderbolt is blown from the sky. 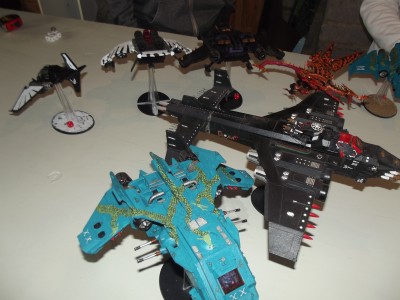 And take four hull points from it. 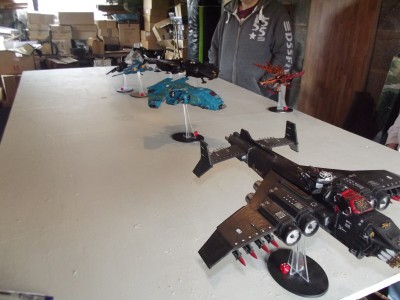 The marauder reaches the table edge. The xiphon flies past the rear of the imperial fliers. The heldrake banks round back onto the table while the fire raptor can only fire one of its turret mounted autocannons this turn. The jinking vendetta survives on one hull point. The ravenwing nefilim survives the Xiphon due to odd rules interactions*.

*The ravenwing rule states re-roll failed jink saves while the rotary missile launcher states re-roll successful jink saves. The one penetrating hit has a failed jink first, then a re-roll to be successful and as you cannot re-roll a re-roll (despite the forced re-roll of successes on the rotary launcher) the Nefilim survived [An endless loop would be possible if you could keep forcing re-rolls.]. The heldrake also loses two hull points. The imperial fliers bank back round onto the table. 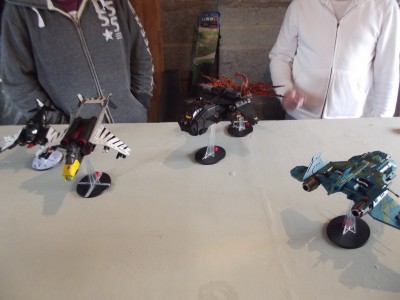 The xiphon is wrecked. The heldrake moves forwards and vector strikes the storm eagle stripping two hull points from it. The fire raptor destroys the vendetta and strips a hull point from the Nefilim. The storm eagle and nefilim charge towards the Heldrake. Taking its last hull point. The fire raptor moves behind the two imperial fliers and reduces them both to one hull point. (Both are jinking at this point) The two imperial aircraft bank back around and get the fire raptor in their sights. They manage to knock off one hull point. The guns of the fire raptor glowed red hot as it continued to pour fire into the imperial aircraft eventually sending both burning towards the ground below.

“Four down. The marauder made it to the target zone. Enemy thunderbolt, nefilim, storm eagle and vendetta destruction confirmed. Three heldrakes and our Xiphon were lost to enemy fire.”

“Proceed to the target site. Fire at will on arrival.”

“Acknowledged” The pilot replies. He glanced at the ammunition counters for the aircrafts weapons and noted he still had more than 50% of the reserves remaining. He activated the internal vox. “Brothers when on site we are weapons free. Shoot anything that moves.”

“You don’t need to tell us twice.”

“Targets in 5 make ready” The pilot stated as he brought the aircraft round and accelerated towards the battle.

A nice swift mission involving fliers on their own. The imperial player moaned about the lack of time he had to strike the marauder. (After he destroyed two heldrakes and ignored it during turn 1) but was happier when he was informed that the marauder reaches the apocalypse game on turn 4. (with five hull points and 6 missiles as the chaos player fired two) the Fire raptor arrives on turn 7 with 3 hull points and no missiles.

As usual the Xiphon continues to fail miserably at its only job. I love the design of the model but it has yet to actually kill an enemy flier or survive a game. (Crosses fingers and hopes its better under 8th edition rules) It didn’t look good for Chaos there, but that Fire Raptor pulled through and saved the day. Nice one.

It really is worth is weight in gold (Its probably my favourite space marine flyer). (Sorry for the late reply, I have been ill for the last few days. )