The post relates to the ongoing narrative campaign that is being run by my gaming group. For Phase 2 Each player has been placed into teams.

Player: KE
List Name: Tapestry of evil
Composition: Chaos space marines and chaos daemons
Warlord: Morrs Penna (Lord of change with customised & fixed ‘master of mortals’ warlord trait. Which allows his army to consist of both chaos space marine and chaos daemon units, but the warp storm table is still utilised and the army counts as being drawn from the chaos daemons codex where this is relevant)

Additional forces [Can be used for subsidiary forces and will be used in apocalypse at the end of the campaign.]

Player: AS
List: Black Templars
Composition: Space marines
Warlord: Sigismund (We allowed him to be used as a super powered emperor’s champion and he is technically the Black Templars second primarch and because he owned the model and we thought it would be fun to allow his use.)

Additional forces [Can be used for subsidiary forces and will be used in apocalypse at the end of the campaign.]

Representing the chaos forces trying to break out from their landing site by forcing a breach in the imperial defensive line. For this mission, we are using the stronghold assault ‘breakthrough’ mission, only playing it lengthwise rather than widthwise representing a small portion of the imperial defensive line. [which adds to the straight up the middle rule for this mission where neither side can make use of outflank.]

For this mission the chaos forces have the use of a lord of War (up to 750pts in value, difference can be filled by additional units). While the imperials can purchase 750pts of defences. Chaos forces get free rhinos for all eligible units (but these do not grant a kill point or provide a victory point bonus if they leave the table.)

Secondary objectives for this mission are: price of failure. Linebreaker *, Onslaught attack and strike the head.

Onslaught attack: score 1 victory point for each unit destroyed in the first turn.

Price of failure: Lord of war worth 1 VP per 3 starting wounds/HP if destroyed

Morrs penna: lord of change with 3+ save, souleater and hellfire gaze. Has the paradox relic. He knows precognition from the divination discipline, flickering fire of tzeentch, Crush and psychic maelstrom from the telekinesis discipline. His bonus power is Scrapcode curse from the heretec discipline

Lord Of War: Greater brass scorpion of khorne. 10 cultists (used to fill in the last 50 pts of the LOW detachment)

Command squad with nork dedogg, kell, astropath, master of ordinance, vox, medipack, master of the fleet, lascannon team. Commander Cavros Thorne has the relic power sword that grants +1 Strength. (the command squad counts as the warlord and such is free. In a 1 vs 9 confrontation morrs penna [The lord of change above] would eat them alive though.)

Adept Nils looked around at the defensive line. Thundering artillery barrages were being traded as the forces of chaos unleashed their fury and the guard responded in kind. The hulking Thanatar nearby cast its shadow over him as it waited for instruction. Mymidon destructors stalked the battlements of the nearby fortress of redemption while the imperial guard forces he had been sent to reinforce wheeled laser destroyer rapiers, a bombard and a pair of chimera transports into position. He could detect the faint traces of fear from the nearby platoon who were led by a priest declaring that the emperor wound protect them.

Looking elsewhere he noticed a squad of conscripts being herded into position as Mr 12 the resident Culexus assassin was given his orders by his Inquisitorial master.

Cavros Thorne looked over the defences and nodded as the unnatural fog parted, revealing the enemies spearhead forces.

“Now that’s a big one.” He commented as a Greater brass scorpion scuttled forwards. 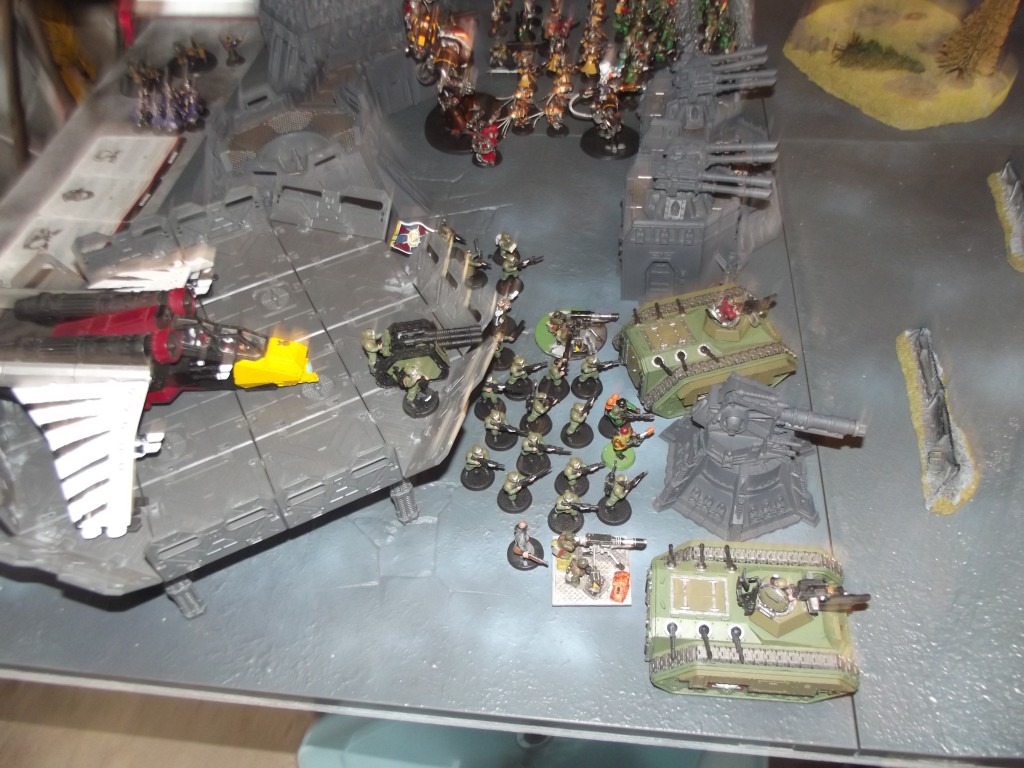 Imperial forces manning their fortifications. (There is a heavy weapons team with missiles in the firestorm redoubt and there is a Secutarri Peltasts squad in the bastion.) 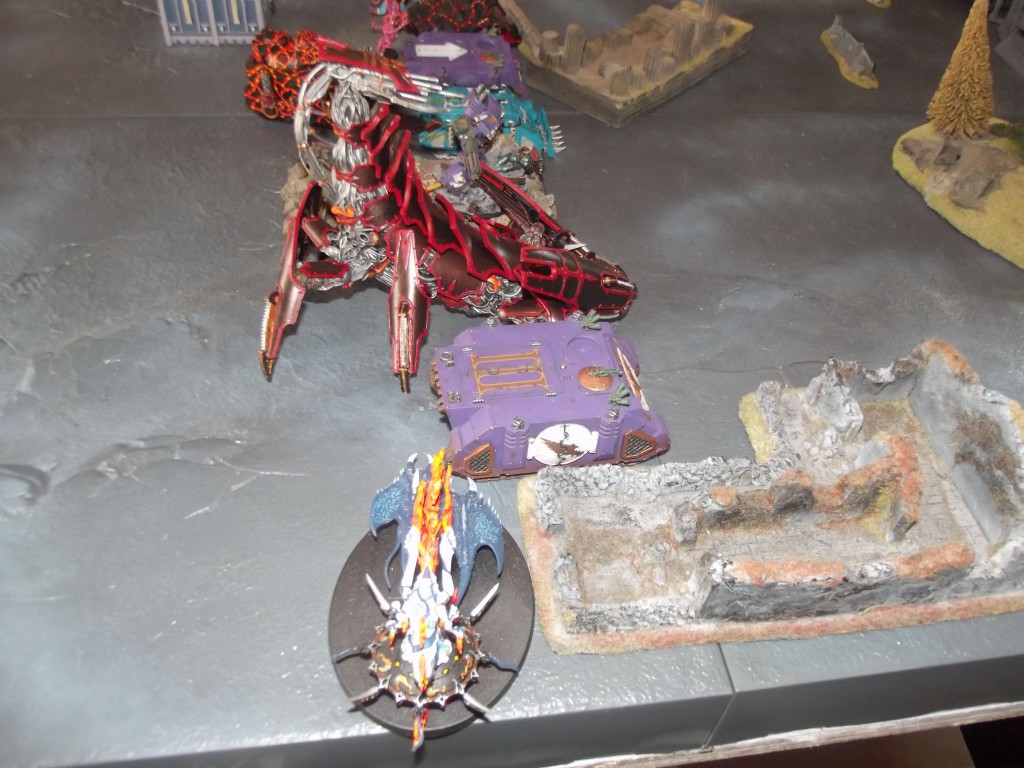 Chaos forces on the limit of their deployment zone. (the burning chariot is on the deployment edge but was wobbling on the terrain hence its current position being due to wobbly model syndrome) 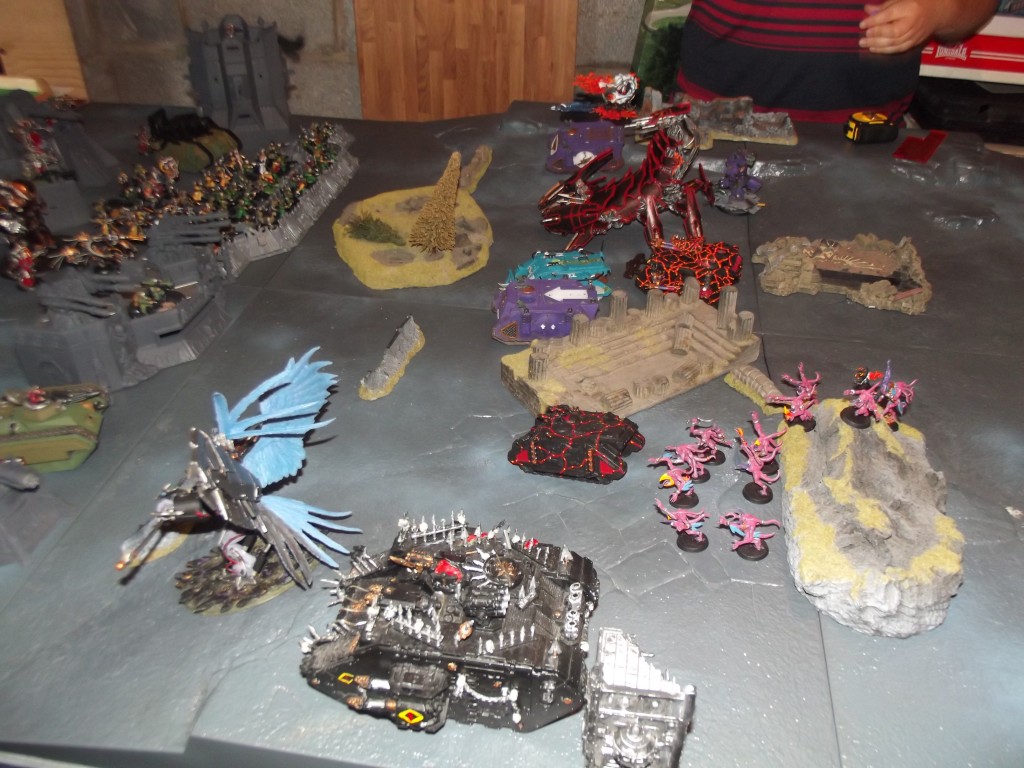 Chaos forces charge forwards as fast as they can. 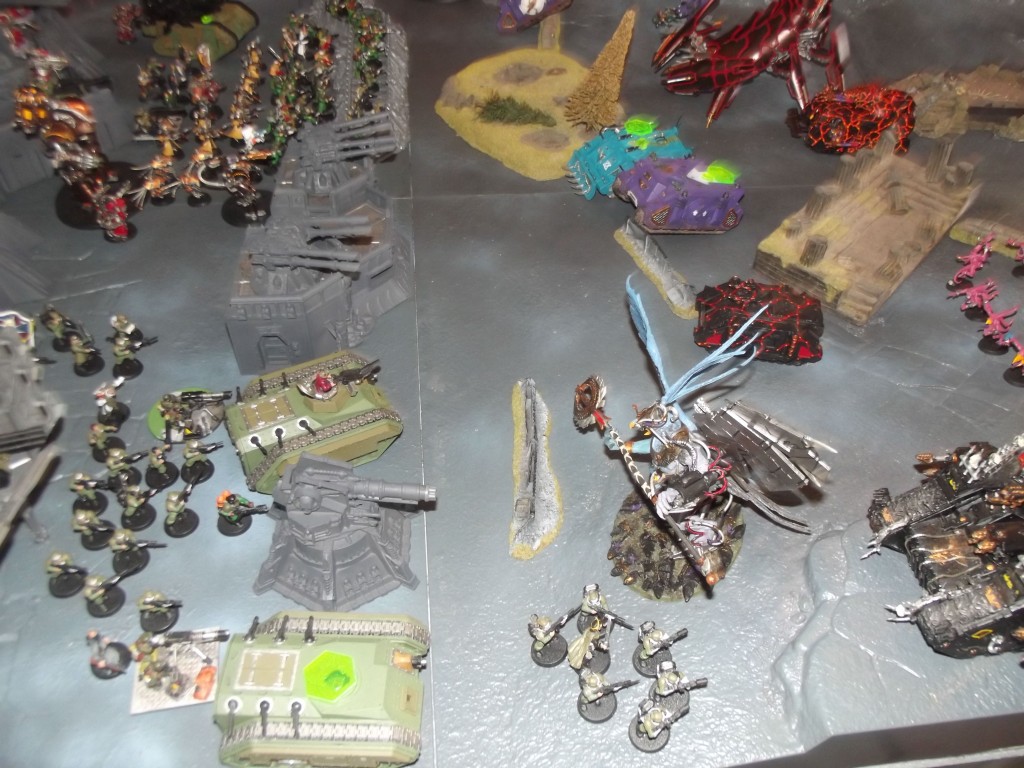 Morrs Penna has destroyed the chimera {Thanks scrapcode curse} forcing the meltagun squad into the open whilst a combination of perfect timing, a locus of conjuration and the flickering fire of tzeentch power was used to burn the missile team from the firestorm redoubt. 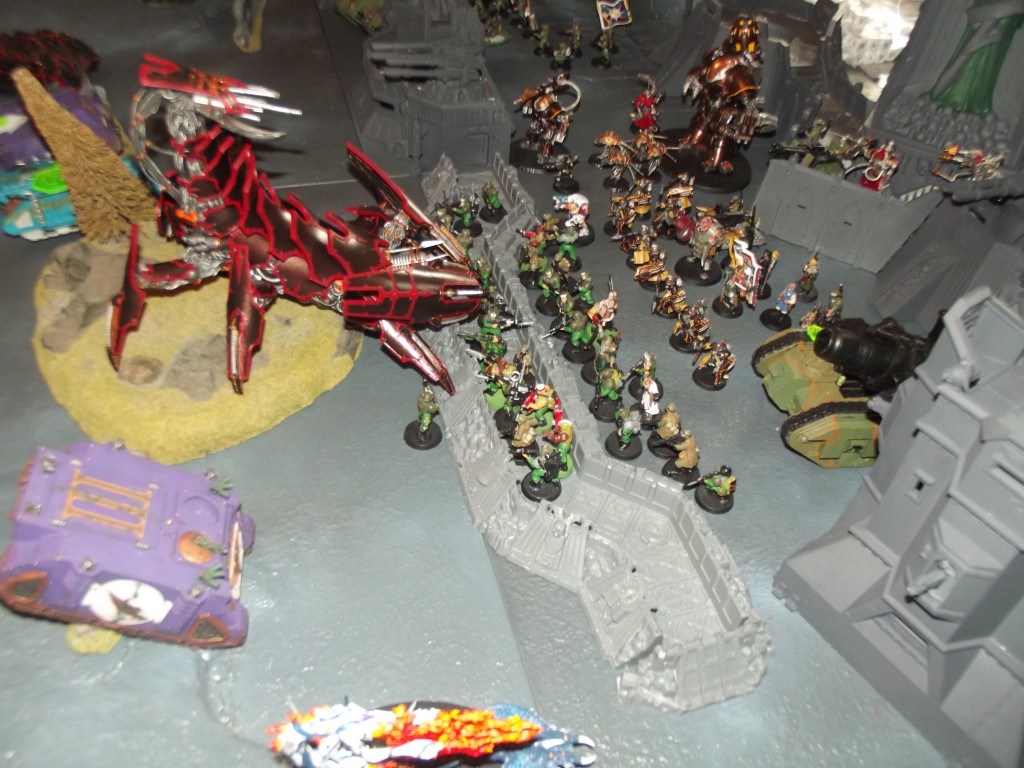 The greater brass scorpion of khorne after some ineffective shooting charges in to tear the conscripts apart. Due to the presence of a priest the conscripts cannot run from the daemon engine but the 1’s rolled for its stomp attacks really hurt its damage output and it kills 3 conscripts. 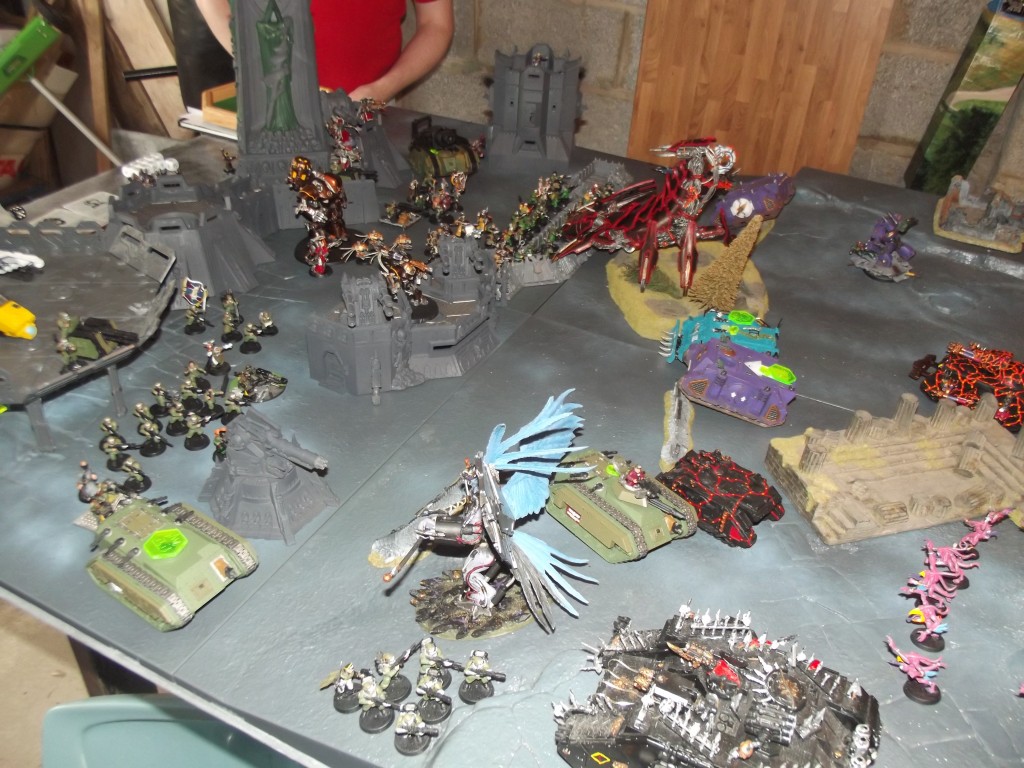 The forcibly dismounted melta team and the second melta team in their chimera move forwards as the secutarri hoplites move to try and charge the greater brass scorpion. 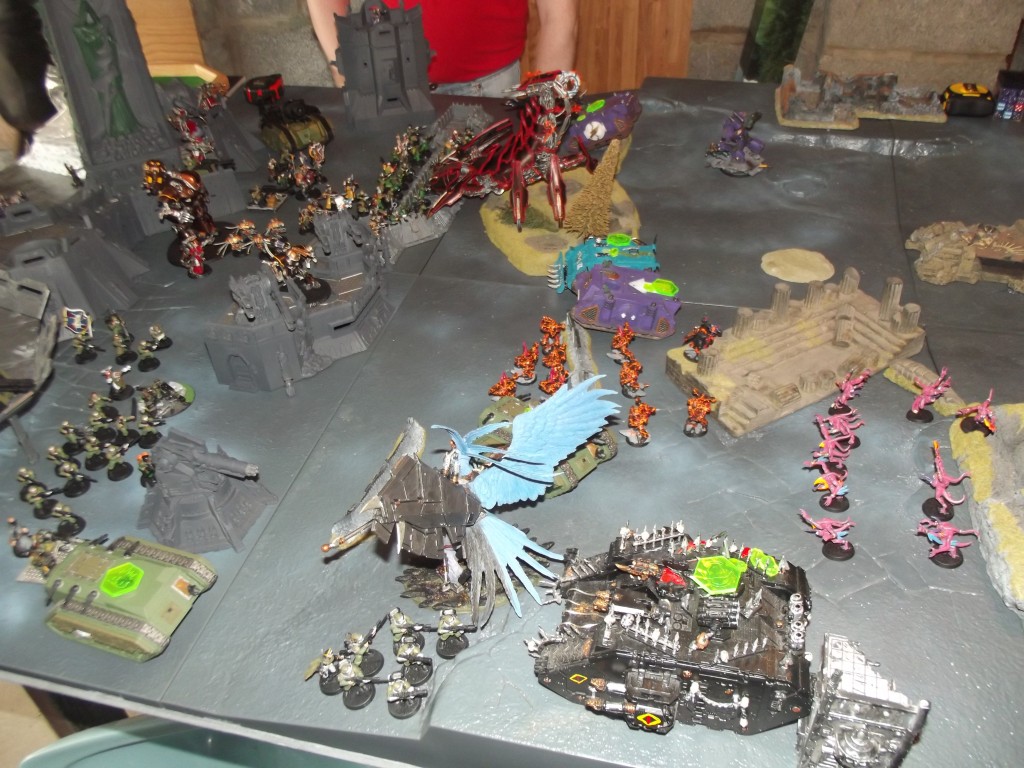 Imperial shooting removes 3 hull points from and stuns the Land raider, while the vendetta destroys the chaos predator and the thousand sons minus their rhino must now walk. (Note all three remaining rhinos are indeed immobilised and would remain so for the duration of the game) Now down to 3 hull points the greater brass scorpion crushes 25 conscripts with its stomp attacks (the only time the rolls on the stomp table were not all 1’s) while a squad of cultists has charged in to help with the hoplites. The thousand sons have destroyed the second chimera before kharn killed the survivors. The khorne squad is now down to one man as the power sword armed commissar killed three of them including the aspiring champion. The emperors children delagatus and his command squad deep striked in the gap behind the bombard and ran off the table. 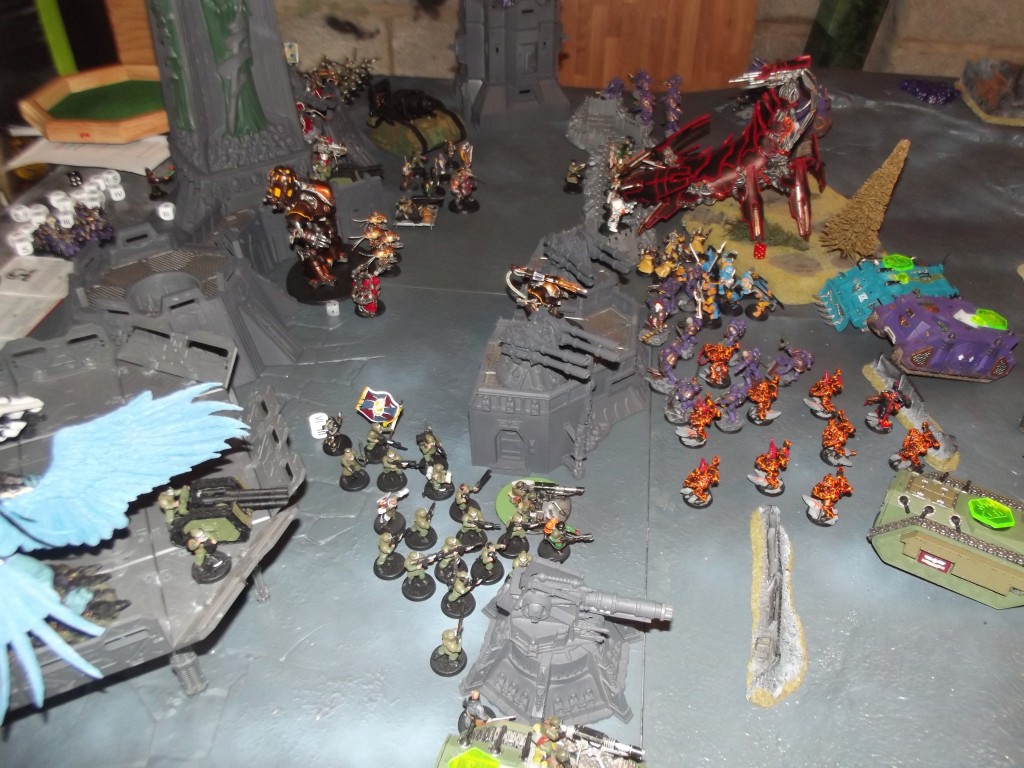 The imperial guard reinforcements arrive and block off the escape route. As the second unit moves forwards. 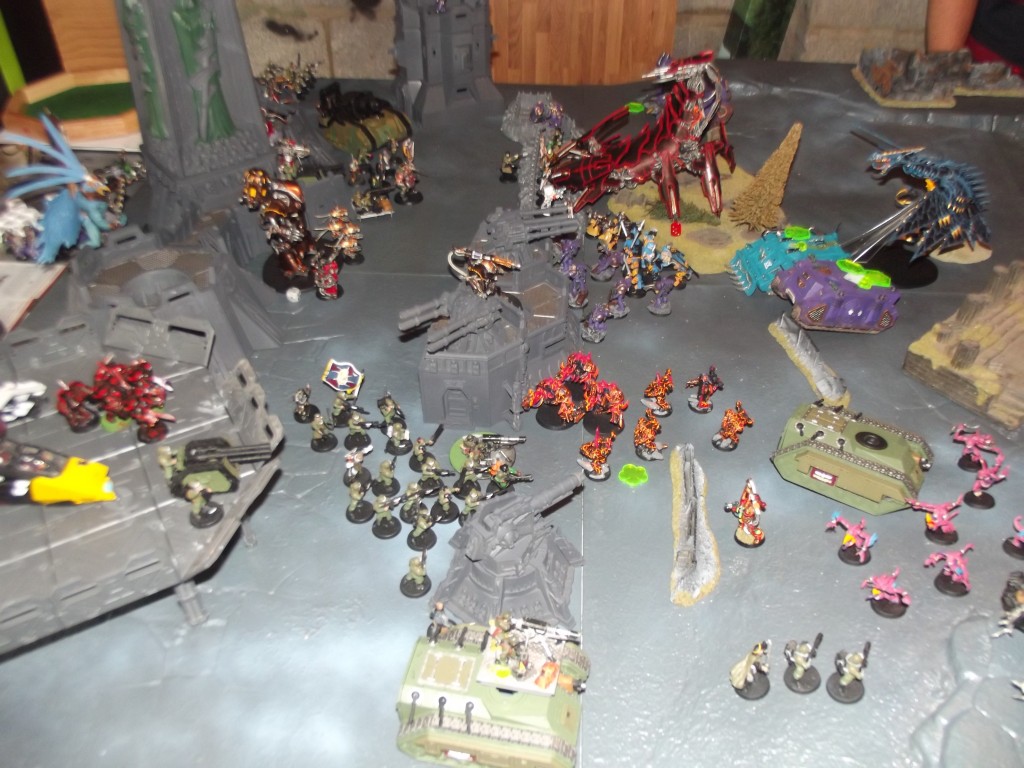 Using the nucio vox the oblitorators deep strike without scattering. Morrs, the heldrake and the Raptors prepare to leave the table. Note that the myrmidons have destroyed the contemptor cortus. The oblitorators twin linked flamers prove too much for the infantry squad. This leaves MR 12 the Culexus assassin in the open. The final Hoplite standing after the destruction of the greater brass scorpion that took out the nearby rhino. The emperors children remnants have charged the conscripts. The heldrake has lost its baleflamer and been shaken as the cultists kill the last hoplite. The inquisitor and the veteran emperors children sergeant having killed each other with a power fist double KO releases the last handful of conscripts. The second emperors children squad claims the empty firestorm redoubt while the oblitorators spread out to surround Mr12. The cultists move up to charge the conscripts. The heavy flamers of the oblitorators turn Mr 12 into BBQ as the cultists kill the last few conscripts. The secutarri peltasts move in to enact revenge. The vendetta finishes off Kharn, the Peltasts shoot down all but one cultist who passes his morale check while the castellax charges into the obltorators who kill it in close combat. Cavros Thorne looked took the offered magnoculars his master of ordinance had presented to him. Looking through he could see more chaos forces advancing. The line could hold but his supplies would not. Those enemy forces who had broken through were even now harassing his supply lines. Taking his master vox in his hand he spoke the words he had never thought he would need to speak.

“All forces pull back. We will be surrounded and cut off if we do not fall back now.” He yelled.

The fall back began in earnest as more fell creations of the chaos forces moved into view. When they reached the lines they spread outwards looking for more victims as well as solidifying the hold the chaos forces had over the area.

Morrs Penna stood as his breakthrough forces harassed the imperial backfield support but did not actively pursue the retreating imperials. Delagatus Parmenion of the emperors children looked up at him.

“Why do we not chase them.”

“There is no need. They have nowhere to run to.” Morrs stated. “they cannot evacuate the planet with our fleet in orbit so they must stand and fight eventually.”

Parmenion snarled and spat out a curse.

Morrs ignored the little marine’s actions as further chaos forces flooded into the area and started stripping the remaining supplies from the imperial positions that had been abandoned when the fall-back order was issued. Sporadic fighting broke out where the enemy had lain traps and where space marines conducted hit and run strikes to try and slow them down.

When we came to totalling up the scores we found that the Imperial force had scored 14 Victory points while the Chaos force had scored 21 victory points. (and gotten 7 units off the defenders table edge[Terminator squad sigma, khorne raptors, Morrs Penna, delagatus Parmenion, his command squad, the burning chariot and the heldrake], with four lurking [Pink horrors, herald of tzeentch, a cultist and a veteran emperors children tactical squad] within the imperial deployment zone at the end of turn 5 when the game ended.)

This was a far cry from the last time our group played this mission.

{that time a combined imperial guard force 4000pts inc defences fought an emperors children/black Templar alliance and held the line preventing anything from leaving the table via the defenders edge. One back Templar squad managed to move through the ruined piles of transports and make it into the defenders deployment zone. The score was 20/3 not quite matching the biggest ever victory in our group. (47/12 if you were interested, Mealstrom (the one where you get a number of cards based on the objectives you hold.) one side scored the hold all objectives card on that day, admittedly with dual chaos daemon summoning lists)}

So it was nice to see a closer game which ran to a natural conclusion. This result leads us further down the path of chaos heading towards the slaughter mission. Cool report and that looked like a fun game. Looked like Chaos had the advantage for the entire game.

True enough, by placing the second infantry platoon in reserve the imperial player allowed the delagatus and his command squad to deep strike in and calmly stroll off the board (my reserves Khorne raptors, terminators and oblitorators failed to arrive during that turn) This was aided by him failing to seize the initiative. Had he deployed them there at the start rather than place them in reserve the result could easily have been very different. [As that was the only open space in his deployment zone.]
The same can be said of the Brass scorpion which performed poorly though as I rolled a lot of 1’s when determining what damage it would do with its stomp attacks. The one turn where I didn’t it killed 25 conscripts. The Hoplites really showed how useful they are here and how much haywire hurts anything with an AV value.