The post relates to a couple of missions that we abandoned during the testing phase. I thought I would cover these and explain why they were not played beyond the testing phase. (There are only a handful of pics here due to us not taking many pics during testing but they had an impact on the story and one mission provided an additional effect.) I will also run through how phase 2 of the campaign functions.

Night fighting in effect due to the power having been cut to the facility.

The mechanicum need to reach the control console within 9 turns or it will explode.

Victory for the imperial forces will provide them with +1 stockpile and grant then enable their reserves to arrive automatically on turn 3 (rather than 4) for the duration of the campaign.

Victory for the alpha legion would generate a point of chaos and force a -1 penalty onto imperial reserve rolls for the duration of the campaign. 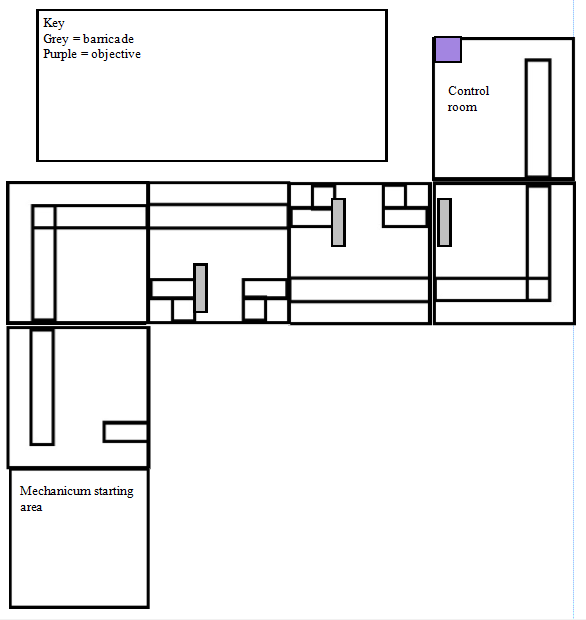 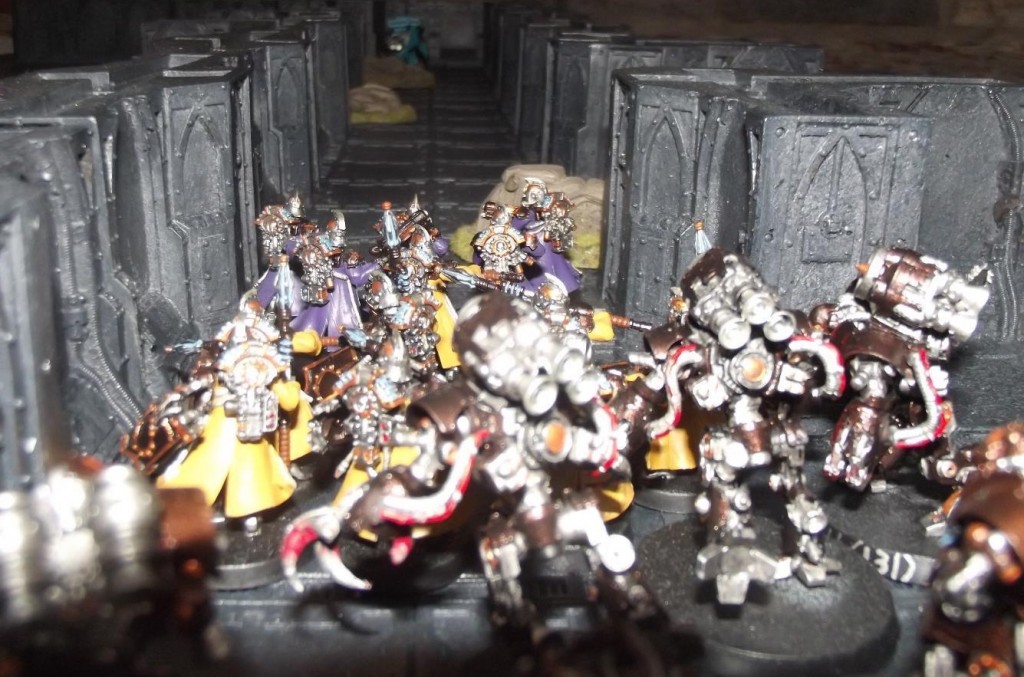 Mechanicum forces head into the com relay and come under missile attack from the siege terminators. 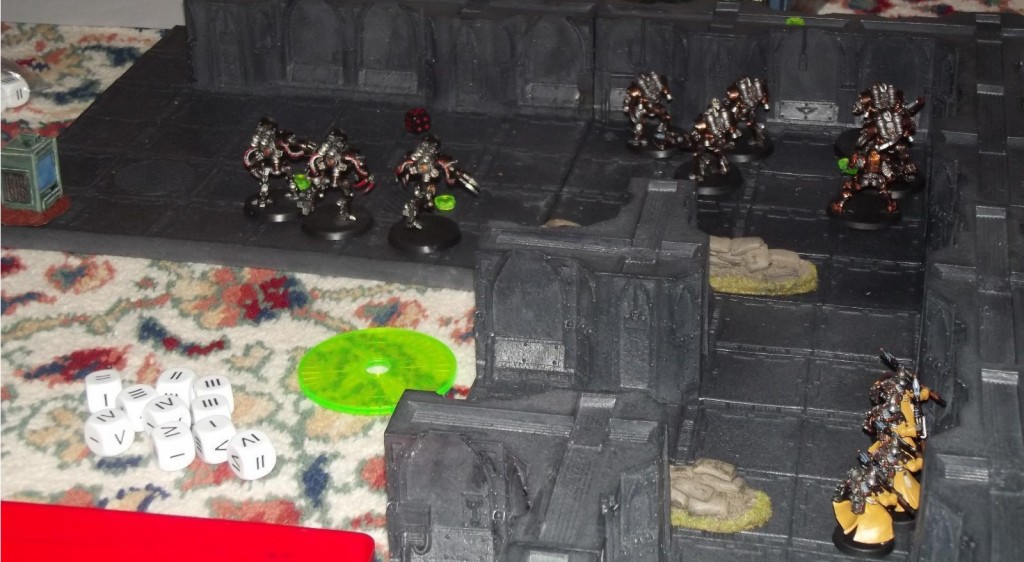 This mission ended on turn 7 every time we played it, as by that time there were no more alpha legion present on the ZM tiles. While we did run the mission as part of the campaign build up our modifications did not improve the utility of the mission. But the result stands and allows all imperial reserves to automatically arrive on turn 3 instead of turn 4 where relevant.

One of the other sub missions that we did test involved a cultist uprising attacking a adeptus arbites precinct. This mission was designed to run at the same time as the vault raid mission. It ran until everything was wiped out during the test. (We linked the missions length to that of the vault raid mission)

This left one member of the emperors law bringers facing down a horde of cultists with his shotgun standing his ground behind his ruined precinct doors. The cultists had been given demolition charges and regenerating units. While it added nothing to the campaign progression it was worked into the story. (The arbites were kept busy while the alpha legion took the intel.) [The intel granting each chaos psycher a bonus power that they can roll for on any table except sanctic from the rulebook]

Subsequent tests of the cultist uprising mission generally ended the same way. (we stole the genestealer cults ambush chart for the cultist squads)

Cultists – 4 squads of 10 models each. (Each squad has a demolition charge. Two units have heavy stubbers and autoguns, 2 units have flamers, auto pistols and close combat weapons. They have the cult ambush, infiltrate and without number rules.) [without number puts an identical unit back into reserve when the unit is destroyed which arrives automatically at the start of the next turn] 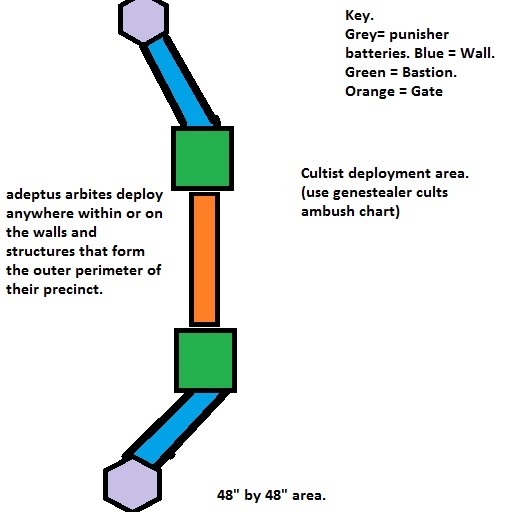 We did not take any images of the test games here but we played it twice with each result seeing the cultist breach the gate and with only a handful of Arbites managing to survive until time ran out. This was added as part of the story but was not played further.

Phase 2 of the campaign

I will now explain further how the missions are structured during the campaigns second phase.

Each player is placed onto either the chaos team or the imperial team. Players are encouraged to make their own character to lead their forces but can use a special character. Special characters however cannot roll on any of the advancement or veteran skill tables.

Each of these characters will be that players campaign warlord and this model (or models in the case of imperial guard) do not cost any points and will gain the eternal warrior rule [only the officer in the guard HQ squad] if they did not already possess it.

Each character is accompanied by a 2000pt bodyguard force. This force can gain veteran skills and advancements by fighting battles. This is what is referred to as a main army. When used a campaign warlord and his bodyguard unit must rest and cannot be used in the next mission. However that player can use a subsidiary force consisting of 1000pts of units in the next battle to assist their team mates. (to allow for multiplayer battles and so that nobody needs to sit out a game)

Main force units can be dropped and changed at any time but you will lose any veteran skills they have earned and even if you bring that unit back (same number/weapons/upgrades etc) it will be considered a different unit and will not have the veteran skills its contemporaries earned.

The Dark angels are hunting for four members of the fallen on the world and so cannot take part in battles normally. Rules for this presented below.

The subsidiary chaos player rolls a D6 for each of their units [but not for independent characters, monstrous creatures, vehicles or units consisting of a single model]. On the first roll of a 1 then a specter is added to that unit. The specter is armed with a boltgun that has the rending USR. He also provides the unit he is attached to with the ignores cover usr as well as providing feel no pain 4+ and fearless to them. (he also has the relentless USR to stop his boltgun from interfering with a unit geared towards assault, he is treated as being BS4 and moves at the speed of the slowest model in the unit)

The Spectres (AKA fallen) I painted up some legion of the damned with some of GW’s clear paints and black armour to represent their otherworldly nature and origins.

The specter himself cannot have any wounds allocated to him and can only be captured, by being hit  by a model with the deathwing usr in base contact during the assault phase (each deathwing model gets 1 dice to try to grasp him per assault phase instead of attacking normally, requiring a 5+ rising to 6+ if the deathwing model attempting to capture him is also in base contact or within 2” of another enemy model). In addition, he does not take up any space in transport vehicles and cannot be locked in combat (except with a deathwing model). If the unit that is holding the specter is wiped out and there are no dark angel models within 12” the specter will retreat and will be removed from the table providing no VP’s for anyone. Any remaining dark angels will also leave at the end of the turn in which the specter is removed.

On the opposing side a small contingent of dark angels will be placed into reserve (6 ravenwing, with 2 meltaguns and a veteran sergeant with a power sword. An additional unit of 3 ravenwing black knights and an interrogator chaplain [added to the Deathwing squad] are added if the unit the specter has joined has a 2+ save) and will attempt to enter play via outflank to try to get to grips with their target from turn 2 onwards.

If the dark angels have failed to apprehend all of the fallen before the apocalypse game they will be added to the imperial side and will try to capture the spectres during the mission.

This shows how the missions run before we reach phase 3. (green indicates the path we take for an imperial victory and red for the paths following a chaos victory.

Secondary objectives:- (appropriated from multiple rulebooks, supplements and old codexes. Then adapted slightly for use with 40k 7th edition)

Now we have established the ground rules for phase 2 I will bring you the report on the Breakthrough mission’s outcome with the next post about the campaign. 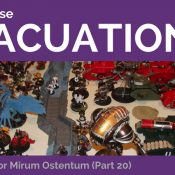 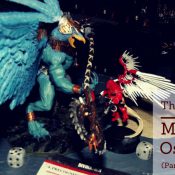 The Battle for Mirum Ostentum – Fog of War (Part 10) I’m curious, how many of you are participating in the campaign? My experience is that campaigns often fizzle out pretty early on, but you’ve been going for a while with this one.

4 main players with the option for others to enter during any game (hence the 1000pt sub forces. which allow for an unbound allied force to aid the main force.)
However we are missing our black Templar player for a few weeks due to his holiday. (We are now proceeding with the campaign though and have played the breakthrough mission [I’m finalising the write up for this] with the next mission planned for this week.)
As for fizzling out that happened with our previous campaign hence the more structured approach we took to this one. (some lessons have been learnt for when we next run a campaign)

Running a successful campaign isn’t easy, so I commend you guys on this. It’s my favorite part of 40K, doing campaigns, but the thing I seldom get to do.