This mission revolves round the imperial force finding out that the real inquisitor Ditya is being held at a remote facility then sending an Aquila lander full of troops (The dirty dozen as it can hold 12 models) to mount a rescue. 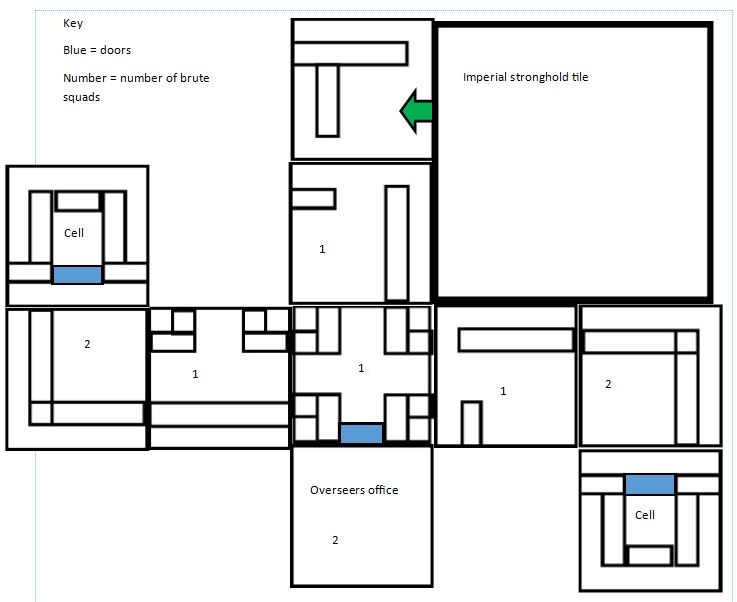 Using an imperial strongpoint tile as the outer portion of the area the Aquila lander arrives and then the troops deploy from it. (this is their deployment.)

Outside on this tile we have 2D6 (rolled for once) units of 3 cultists, these regenerate when killed and will keep coming back.

The overseer has a cell key and will drop it when killed. An imperial model can then use it to open the cells (Normally AV 14 3HP). Breaking one open will allow the overseer and those in the office to move out and actively hunt the imperial forces.

The numbers on the tiles are the brute squad values within the tile.

Alpha legion brute squads will fire (snap shots) on any unit that moves within 12” of them and will them become active and start actively engaging the imperial forces. Being fired upon from outside this range also activates the squads.

Alice and Virgil do not take up any space in the transport. (Which will remain on station outside the base waiting for pickup. (Cultists can swarm round it but they cannot hurt it.)

Models who die stay dead. (and can be initially selected from any available unit, they then gain the independent character rule. 3 get kill team bonuses from the normal KT list. If they survive they can retain these for the final mission.)

Roll a D6 when the first cell is opened. On an odd number place Alice in the now open cell. On an even place Virgil.

Evacuating Virgil wins the game for the imperium and prevents the alpha legion from making use of the outflanking rule during the evacuation mission. Extracting both Virgil and Alice allows them to be used in the final mission granting a +1 LD bonus to all imperial forces.

If Alice is killed she becomes a second grabbable objective like Virgil.

Regardless of the number of turns that are taken the Aquila will arrive back in the apocalypse evacuation game on turn 3. (Along with any survivors) 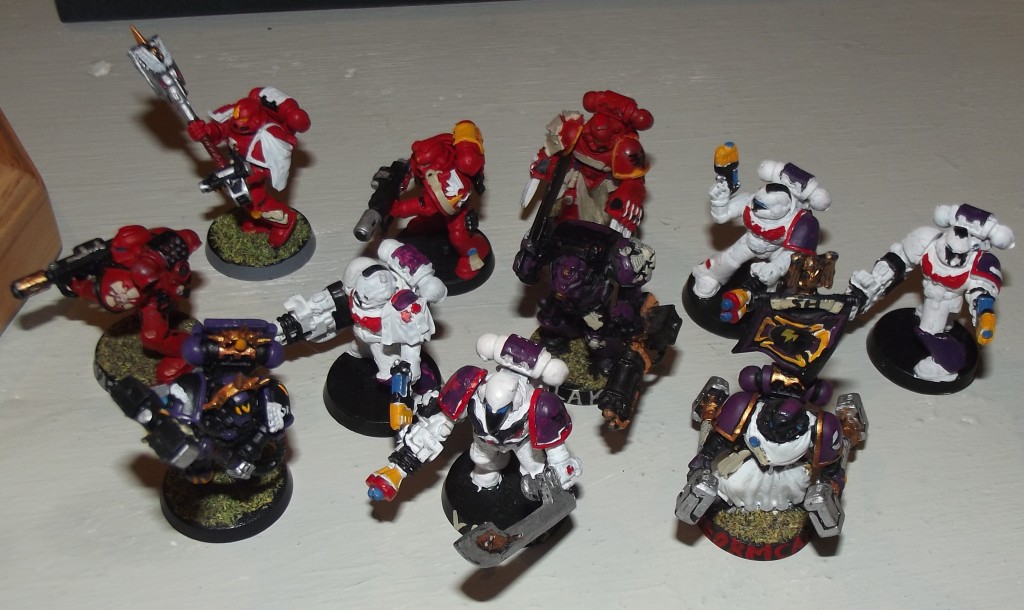 The ‘dirty dozen’ kill team. (10 men and a terminator taking up a dozen transport slots Normally the Aquila holds 7 models, we modded it to hold 5 more as it is a customised inquisitorial version.)

Captain Kraken looked at the assembled troops. Master Stormcaller had opted to take command of the kill team for this mission. He had four blood angels with him, two meltagunners, sergeant Anders and a sanguinary priest. Three cleansing fire marines and their captain were accompanied by Drachen and lone wolf terminator Malak.

“I wish you the best of luck. Your objective is to retrieve inquisitor Ditya and any other captives at the designated location.”

“Predominately cultists with some alpha legion retainers.” Kraken replies. “Their main forces are heading this way so you have the window of opportunity provided.”

“Move out.” Stormcaller states and leads his group into the Aquila lander.

“The emperor protects.” Kraken states as the Aquila landers transport bay is pulled up into the vehicle and the aircraft takes off.

Stormcaller pulls up the tactical map of the target location.

“On arrival Cleansing fire units will secure a beachhead. We will then deploy and enter the facility. We are to clear and search for prisoners. Once we have acquired any captives we are to pull back to the lander and evac.”

“And the lander?” Drachen asks.

“The pilot will keep the lander in the area. If he keeps the lander in hover mode the cultists will not be able to cause any significant harm to this vehicle.” Stormcaller states into the com.

“As you wish lords. Target zone in three minutes” The pilot replies from the cockpit.

The alpha legion fail to do any damage to the imperial kill team during their turn.

Multiple gunshots sounded out and captain Drachen fell, his leg armour ruined and his left leg gone below the knee. Brother Malak grabbed the marine and dragged him into the lander as it swept down and landed. Stormcaller entered a moment later. The rest of the kill team close behind as more cultists surged forwards.

Anspatch stepped in front of Silus and cut down the charging cultists allowing them both and Virgil to enter the ship. Brother Mien fell as cultists piled themselves on top of him and beat him to the ground. Alice ran forwards and pulled herself into the cargo hold of the Aquila a moment before it lifted off.

The jet blasts from the aircrafts engines were strong enough to scatter the surrounding cultists. The pilot engaged the aircrafts forward thrust and accelerates.

“Hold on this could be rough” He shouted. An aging hydra turret rotated to face the lander before opening fire. Two shots hit but failed to penetrate the Aquila’s armour. The vehicle reached top speed breaking the sound barrier as it topped out at 1,900 km/h.

During testing our imperial player thought that the difficulty was too high with the constantly regenerating cultist squads. I kept with it (restricting them to remain outside though) since we have broken the normal kill team selection rules. By allowing 2+ saves, multiple wounds and HQ models. The result was this mission was both enjoyable, tense and balanced on a knife-edge throughout.

Of the initial 11 members, the kill team was reduced to four members by the end of the game. (And this was following some very lucky saves and or feel no pain rolls.) These along with the lander will arrive on turn 3 of the final mission.

With this result the Alpha legion cannot make use of the outflank rule during the evacuation apocalypse mission and all imperial forces get +1 LD for the duration of that game due to the successful extraction of Alice.

16 Turns is a long game of Kill Team!

Turns fly by in Kill team (we have modified the rules to suit our needs, but this is the highest number of turns that any of our games reached) and the game only lasted about an hour. It turned out to be thematic and fun for those playing.

That’s awesome. Those are the best games.