With the forces of chaos having earned a victory on the ground during this campaign we now need to see if the imperial war machine can rescue any of their ground based forces.

Imperial: total 3790 pts [Helix Tagmata ark has Leadership 9. The Star fort has a Ld 9 1 re-roll admiral on board, The undaunted warrior is Ld 9. Space marine ships get + 1 Ld added to their value.] 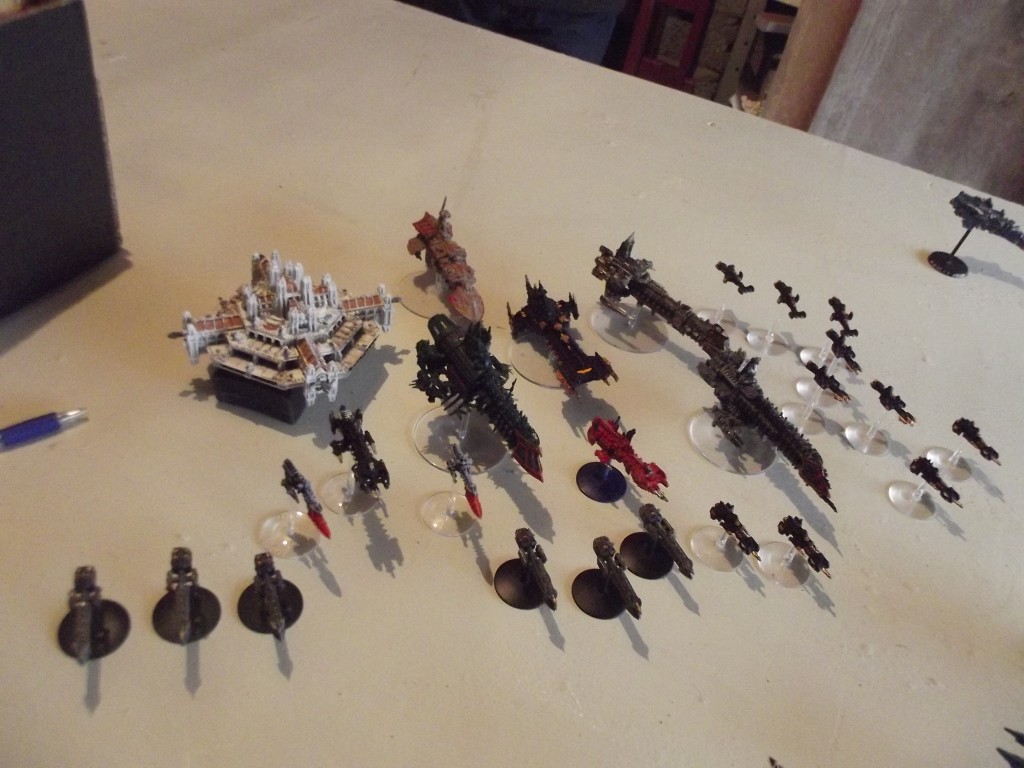 (Leadership values to be determined) 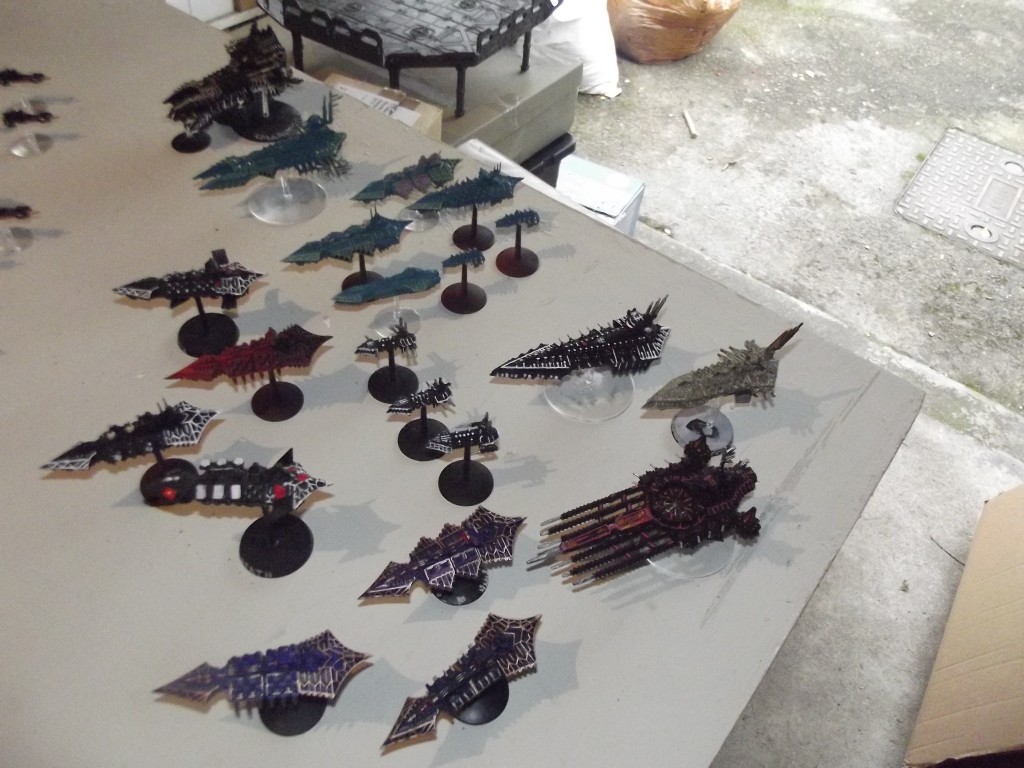 The dark angel battlebarge will emerge onto the table a turn of the imperial players choice [cannot be turn 1] from the arrow (nebula). The ramelies star fort needs to be deployed 20cm away from table edges.

The objectives are simple. Chaos needs to destroy the Star fort while the imperial forces need to use the time it takes for chaos to do this to try to reach the planet and attempt to extract their forces from the ground.

Attacking the planet (chaos) cruiser or larger must remain in low orbit to fire upon the apocalypse game. Ships cannot be carriers (cannot be styx class) and the Caladaris nova makes D3 orbital bombardments per turn if it is used in this manner. Ships cannot be placed on special orders or fight if they wish to make orbital strikes. (you get one per turn corresponding to the turn that the ship remains in orbit for.)

Conducting the rescue (Imperial). Requires a space marine ship (Undaunted warrior, hurricanes wrath, Sanguinem nuntius or regrinus) in low orbit. If the ship come under fire the recovery attempt suffers a –1 penalty for that turn. Like with the chaos ships above the imperial ships cannot fight or be placed under special orders while they are attempting to recover troops. A cruiser or larger ship can conduct orbital strikes as with the chaos forces above.

Galrauch was stirred from his reverie by the sensors detecting movement. A warp ripple deposited a fully armed and active ramelies star fortress a reasonable distance from the planet. An imperial fleet was a short distance behind powering towards the world.

“All ships bring all systems online.” Galrauch stated into the inter ship vox grid. “We have company.”

“Our ground forces have requested orbital bombardments and are sending coordinates.” One of the other ship captains replies.

“We shall leave the Consilia in low orbit to act on the coordinates.” Galrauch Snarls. “A decisive strike on the fortress will secure our hold over this system.”

“Sword brethren Jamal.” One of the chapter serfs states.

“No contact from any of the forces we deployed to the surface.”

“Do not worry about that.” Jamal states. “The chaos jamming signals could be interfering we should move in closer and see what we can do.”

Magos Drak sighed as the tactical situation was projected into his cortex. Loading the nova cannon was a simple task and with a thought he used it to strike one of his foes.

#Enemy fleet will be in engagement range in three minutes#

Admiral Lucas sighed as he gained full results on the chaos fleets disposition. “Their tonnage far exceeds our own.”

“Sir we have launched fighters as ordered. Five carriers identified as part of the chaos fleet.”

The imperium wins the roll off and choses to go first.

Imperial movement phase – The sacra canis moves to bring its broadsides to bear, the black templars strike cruiser makes it through the chaos line while the battleships and escorts in the centre move to attack the chaos fleet.

Imperial movement phase – The undaunted warrior moves around the planet in low orbit as the black templar ship uses all ahead full to reach it. The escorts move to try to block the caladaris claw.

With the chaos forces having completed their objective and the Caladaris claw closing in on the undaunted warrior. (Next turn the claw would have a full close-range broadside and nine lances to target the imperial ship. (Chaos still has two fleet re-rolls which would have been used to try to get the LD6 ship to obey the lock on command.)

Galrauch watched with interest as the ramlies starfort was reduced to a floating ball of scrap. He turned his attention back towards the planet.

“All ships. There is still meat on the bone.” He snarled, barely managing to maintain control over the daemonic dragon he shared his body and soul with. “Let us go hunting”

As one the entire fleet began to turn back towards the planet.

Sword Brethren Jamal was about to give the order to engage the enemy vessel when it unleashed its weapons in the direction of his strike cruiser.

The barrage did horrendous damage to the structure of the vessel as the Claw unloaded its lance batteries ignoring the strike cruisers hardened armour.

“Jamal. Get out of there now. The enemy fleet is turning. We have a window that will slam shut if we do not move now.” The dark angels chapter serf states over the vox.

“Do not squander the lives you have saved by fighting a battle you cannot win.”

Jamal slumped into the command throne. “Head for the warp point. Wring every ounce of speed you can from this ship.”

We now have the maximum length of our final apocalypse game of this campaign. Seven turns.

I do not know how this continues to happen when we play battlefleet gothic as the imperial fleets consistently get annihilated by the forces of chaos. But when you break down the way the gunnery works in battlefleet gothic, chaos has an advantage in speed (to allow them to close the distance) and this allows them to get behind and in between the imperial units. Lets look at the gunnery table and an example. 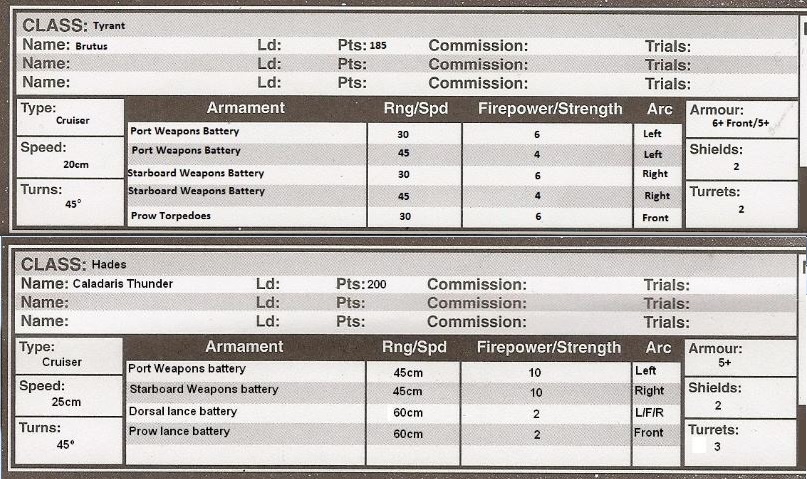 In our example above we have two similarily priced ships.

The chaos ships braodsides are linked into a full firepower 10 range 45cm batteries. While the imperial ships batteries are split 4/6 firepower with ranges 45 and 30. So at under range 30 both ships have the same broadside values.

The other difference is common Torpedoes on the imperial ship and range 60cm lances on the chaos ship. The chaos ship also has 5cm more speed. This would enable the chaos ship to outpace and outgun the imperial ship. While you normally roll to hit vs the enemies armour (6+ on the front of the imperial ship) lances bypass this and always hit on a 4+ and they also ignore the gunnery table alwys rolling a number of dice equal to their firepower value while torpedoes get launched and head forwards rolling a number of dice equal to their firepower but still vs the enemies lowest armour value if they pass over a ships base (these can cause freindly fire incidents). {Note according to the battlefleet gothic rulebook you could also take chaos ships in an imperial fleet and imperial ships in a chaos fleet.}

For fun, I may just grab everything and do a big fleetpocalypse game of imperium vs chaos to see just how much the forces of chaos can take on.

I know little of BFG, but this seems like a big game? How long did it take to play a game this size?

The above game took 3 hours so not bad for a 4000 pts a side game. (All the players having read up on what thier fleets could do helped us play reasonably quickly.)

What would be considered a “normal” sized game? I’ve been wanting to get into Battlefleet Gothic for a long time now, and I keep hoping it’s on the list of specialist games to get updated soon.

On average 1000pts used to be considered a normal sized game. (BFG used the old 500, 1000, 1500 and 2000+ brackets for its game size and had varying time estimates based on the size of game. with restrictions on what you could select based on your faction and the points value in use.)
I really hope they do an update via specialist games for BFG as the foundation is solid. We just need a big pile of plastic ships. (I really need to kitbash a tyranid fleet and paint the elder fleet I have lying around. These two fleets work differently to the chaos and imperial fleets we have been using so far.)