This Chaos Land Raider project has been in progress since May of this year. I had bought it years prior to starting on it as well. So, I guess you could say this has been a project for quite some time. 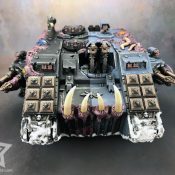 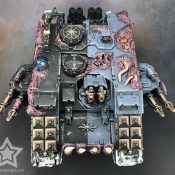 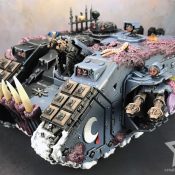 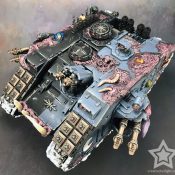 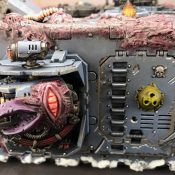 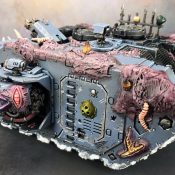 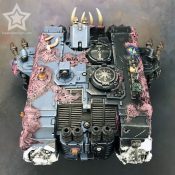 I’m happy with how the Land Raider came out. I will admit that it’s not my favorite work, and there’s a few reasons for that. Long story short, I did a lot of learning on this model. There were a few things, the biggest being the weathering, where I went back and redid it. While I like how the weathering came out, I would do it differently if given the chance. However, as many painters know, at some point you have to say fuck it and move on, and that’s what I did.

Now, don’t get me wrong, I don’t dislike my work here. Ultimately though, I just feel that this was more of a learning experience for the painting and less of a showcase.

That being said, there’s a lot of value in that. In order to get better we have to learn and we have to experiment. I, like most of you, don’t have spare models to learn on. So, I’m always learning while I’m painting something I need. Sometimes that goes great, other times not so much, but it’s valuable in either case.

That out of the way, there are parts of this that I’m really happy with. I think the conversions and sculpting worked well on the model. It’s one of the few times where I was able to actually translate a vision of mine accurately to a model.

The flesh was used to hide horrendous gaps, which is why you mostly see it at the seams. I got the model used and it needed some love. The rest of the sculpting work was just for fun and to learn.

I’m pleased with the painting of the teeth, the Khorne door, the red lights/lenses, and the daemonic flesh in general. As a whole I feel the model did come together well.

If you haven’t been following along, I tried to represent each of the Chaos Gods on the Land Raider. My warband, the Disciples of Twilight, are an undivided one. So, I thought it would be fun to show each god. Therefore, on the top is an eye for Tzeentch, left side a claw for Slaanesh, also left a pustule for Nurgle, and lastly a bloody door for Khorne.

Also, for those unfamiliar, the snow added on is to tie this into the rest of my army that has snow basing. I think the snow came out well on the Land Raider as well.

Oh, the daemonic flesh was done using this cool and simple tutorial.

Lastly, all the hatch lenses and stuff like that were done using my glass effect that I have a tutorial on.

While I may not be as ecstatic about this model as I could be, I am happy with it. I learned a lot working on the Land Raider, and those lessons will be applied down the road to create even better models, so I have no real complaints; it’s still a success. If nothing else, this thing has character. Wonderful work, it really came out well in the end. Unique to your warband and all. How has it fared in games?

I haven’t really used it since I started painting it. I did use it a bit early on in 8th though and it did pretty well. If you can keep people from tying it up in combat then it’s a workhorse.

Well the result is great! I love the Khorne door (gore),snow and lenses are frankly a top detail! The four Gods are well mixed, the result is armonic and neat, as your painting style.

Having some miniature to experimentate is always great.

Thanks. It was a lot of fun to build and paint.

Your not off by much on your weathering I’d try to explain what might help here but would take too long. Really simple to do but hard to explain. It’s a beautiful tank, conversion and paint job. I love it and wish I coulda seen it in person. Your stuff tends to push me to want to improve, I feel like over the last year you’ve taken your game to the next level. To some extent our styles are very much opposites. My next project I am going to be practicing painting in a very clean way which is something I struggle with at least from my point of view. Gotta try to catch up with you and hit that next level. All that text vomit to say great work and I can’t wait to see this in person at some point. Also I want to see you paint dirty next year 😀.

I feel that I should have done the heavy chipping by hand and left the sponging for the lighter weathering. That would have given me more control over it, and let me detail the chips better. As it was, I changed technique once it was done, so I had limited success with it. Live and learn.

The thing I’m trying to settle on is what goes under the weathering and chipping. This time I did metal because it makes sense. The idea of showing primer underneath, say a red/brown, isn’t realistic. If it chips the paint then the primer is going with the paint, leaving the bare surface.

That being said, showing the primer underneath over metal gives you a lot more artistic freedom, and that’s my struggle. Do I go realistic, or do I go with the rule of cool? God damn painting conundrums!

I’ve layed off the unit painting lately and have focused on single models for the better part of a year now. It’s really let me play around a lot with techniques and expand my repertoire, which has been awesome.

It is fun having our back and forth painting “rivalry”. The past few years you’ve been beating me out at the Standoff, and you absolutely earned it this year. Congrats.

Yeah I’d like to see you paint say a catachan slogging it through the mud or jungle. I’ve only ever seen your chaos and daemons. It would be cool to see how you would approach the model.

I did a little bit of that with my Blood Bowl team, but it was very tame overall. I hear you though, trying different stuff is a lot of fun and really pushes you out of a comfort zone.

Looking great! There were a few elements (perhaps most notably the claw on the left side Lascannon) that I wasn’t really sure how well they were going to work when looking at the unpainted version, but the paintjob has really pulled it all together. And yeah, I know that feeling, when you’re happy with how everything turned out, but you also see all the things you could have done better.

Ironically, the claw was the one thing I knew would work, but the rest of the god elements I wasn’t so sure of ;)

It’s a bittersweet feeling. At least now I can accept it as a lesson and not a failure.