This was a project in the works for a year or more. I bought the Chaos Predator used, and it then sat on a shelf. The release of 8th edition has given me back some of the hobby motivation that fled me in 7th, so I set to getting the Predator repaired and painted. 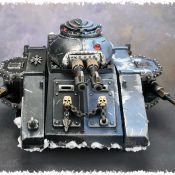 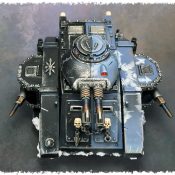 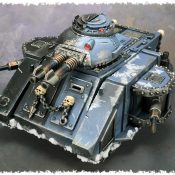 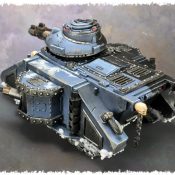 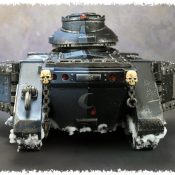 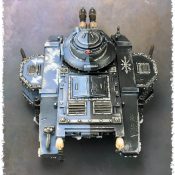 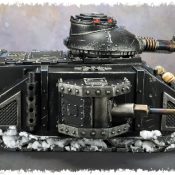 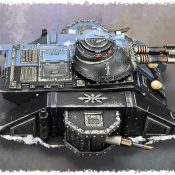 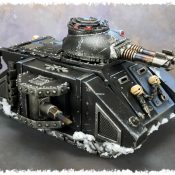 I’m really happy with how the Predator came out. The repair work was tedious. It’s fun renovating a model for a while, but it eventually reaches a breaking point. There’s some imperfections that aren’t hard to spot, but it’s all stuff I can live with.

I decided to do some light weathering and damage on the vehicle. So far, barring my Knight, all my models have been showroom painted, as in no damage or weathering. I feel like it’s time to change that, to get my models a little gritty, and that’s starting with this Predator.

I won’t be doing any elaborate weathering, like Greggles does with his Orks. Also, I won’t be hand painting chips and highlighting everyone of them, but instead the simple weathering like you see here. The other techniques are awesome (I love Greggles’ techniques), but there has to be compromises on account of time. At this point getting good quality models on the table is the goal, not spending 20 hours painting one tank.

Anyway, for as simple as a metallic sponging technique is, with a few scratches thrown in, I’m happy with the result.

The other thing I did with this model, that I haven’t done on a previous vehicle, is adding the snow. I do snow basing on my infantry/based models, but vehicles have no bases. So, I figured getting some snow on it in a realistic manner would tie it in with my other models.

If you like how my hatch lenses came out, then check out my tutorial on painting a glass effect.

Oh, I went a bit heavier on the gun barrel heating than I intended. That being said, I like it a lot more with it bold like that. Normally it’s a more subtle effect I go for, but I like this.

Lastly, the abstract Chaos star came out well I think. I wanted to do something big and different with some freehand. It creates a fun, asymmetrical focal point that I like.

I will very likely be painting the Land Raider next. The conversion work is done, and painting this Predator was a warm-up for it. I wanted to experiment a bit before tackling the Land Raider. I did figure out some stuff while working on the Predator, so I may as well jump to the main event. 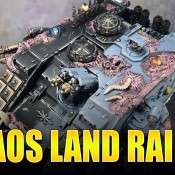 Looks great. Can’t wait to chop it to death with Raven Guard.

Yeah, why use power fists when you can use swords ;)

Thank you, and I absolutely agree. I feel the most important factor is composition. All the best techniques in the world are meaningless if you can’t compose it into something.

That looks really well, it will tie into your army perfectly. One of the things I have always been fond of about your army is the cohesive look.

Any chance you can do an article of everything in the Disciplines of Twilight?

What type of article? You mean like a full army shot?

Excellent job, dude. The snow will tie it in really nicely with the Based portion of the Army, and the weathering is noticeable without being overwhelming.

I think I may have mentioned it before, but I really do like the split colour scheme you use for these guys. It adds so much to the Models by having them present so differently depending on what angle they’re viewed from.

I’m really glad I decided on the half scheme. A reason I went with it was for what you say, it gives the model a different look from various angles.

I wanted something challenging too, and it can be that at times. Not so much splitting a model in half, but getting colors on there that work for both colors. It can be frustrating at times, but well worth the effort.

Very nice job, I like that you declined the weathering to your painting style, clean and tidy, and not vice versa. However remember that weathering gives easily addiction, you need always more!

Thank you, and I know what you mean. With my Orks, who I haven’t used in years, I did a lot of weathering. It’s so easy to just keep adding more and more weathering that the trick is finding the perfect amount.

I like seeing the older models painted up. They fit chaos forces very well in my opinion due to CSM having to salvage destroyed wrecks (In the case of the SW derived predator annihilator that by 40k standards is a recent vehicle) and repair their old equipment to keep themselves supplied. So you additional heat damage on the guns just works. {CSM are less likely to replace the barrels on their lascannons that loyalists are.}
It is a real shame that the CSM vehicle line done by GW are just the space marine kits with spikes. They should really be closer to the HH/Rogue trader vehicles.

Agreed. One reason I bought this one, other than being really cheap, was for being an old model. I also dislike that Chaos was historically spikey Marines, so this tank could stand on its own as Chaos without that.

That’s something I’m glad they did with the newer Chaos models: Raptors, Chosen (Dark Vengeance), Helbrutes, etc., is to give them their own aesthetic without just being spikes. The baroque armor works very well for them, and I’m just hoping they decide to finish the army at some point.

True we got new TS models and are getting some new Nurgle troops.
I wonder when we will get a proper chaos chosen kit, a havocs kit, a new kit for khorne berserkers {we got a new kharn and they should have been out around the same time as him. They haven’t had an update since 3rd Ed}, some plastic noise marines (I am seriously looking at grabbing some Kakophoni from FW as Sonic blasters may be worth taking in 8th Ed.), a land raider kit that doesn’t come with imperial eagles in its tracks [FW used to do a chaos track kit but its now OOP], the list goes on.
With GW’s push towards chaos vs imperium this edition we may yet see such things come to pass. (but I’ll hold my breath)

Every Chaos player is wondering the same thing.

It came out really well I think and as I’ve said before, I love it when old models gets some love :). I think that one was the first tank I ever bought back in the day.

I do enjoy working on old models. I didn’t play when models like this were new, but all of my armies have some.

Awesome work on finishing it Thor! The chipping and snow look awesome and help bring the tank to completion. Can’t wait to see what you do for the Land Raider.

I’m feeling more confident about the Land Raider now I’ve done this and learned some stuff in the process. It’s primed, now to find time for paint.