This is the final mission of our campaign, Mirum Ostentum has fallen to the forces of chaos. Can the imperial forces manage to evacuate any of their forces from the planet? This mission will decide the fates of the imperial campaign warlords and their forces.

From the battlefleet gothic mission we have the maximum game length, turns where a bombardment can be conducted and turns where an evacuation can be attempted. From the aerial interception mission we know when the chaos air forces will arrive. 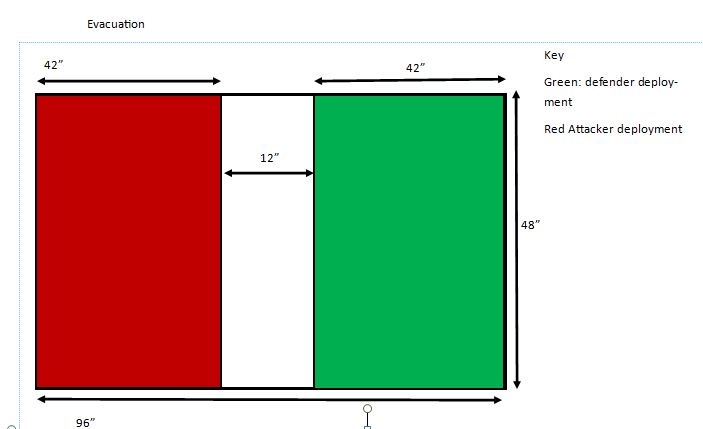 A landing pad will be placed in the defender’s deployment zone along with a castellum stronghold. They can deploy any of the units* and models that survived the previous game of apocalypse within their deployment zone.

From turn 3 onwards the defender can extract any unit on the landing pad or in reserves, 5 Maximum (per ship in orbit), cannot be pinned, gone to ground or in close combat. (Transport vehicles count as 1 inc the troops inside.)

The Aquila lander can transport 12 infantry models into orbit per turn once a ship is in orbit. It leaves the table, deposits the transported unit then returns to the landing pad. It can do this immediately upon arrival with the kill team if desired then return on turn 4 to get another unit. It will then get one unit per turn. Enter – embark – leave)

The attacking force {chaos} are deployed in the red zone and cannot use models that were destroyed in the previous game.

This mission continues until the end of turn 7.

Campaign warlords must be evacuated where possible.

Orbital bombardments: the defender and the attacker can receive 1 bombardment per turn that they have at least one ship in orbit.

*Units that have been depleted remain depleted but can be combined with other depleted units to form ad hoc squads. Damaged vehicles and characters will regain 1 W/HP. Eternal warriors will return with their full complement of wounds provided they were not killed by a D weapon rolling a 6 to wound or by a unit in close combat.

All unused stratagems from the previous mission are available for this mission. No bonus stratagems will be provided.

The castellum stronghold contains a powerful transmitter that provides the forces of the imperium with scatter free deep striking (While the command bunker is intact). Terminators can only teleport in on a turn where the dark angels battlebarge is in orbit and only Dark angel terminators have the deep strike rule for this mission. Surviving storm hawk terminators must deploy onto the table normally. Assault squads can still deep strike normally.

The forces of chaos will still need to activate a dimensional key to gain scatter free deep striking. And have the same restriction on terminator squads (where they can only be deep striked in if a ship remains in orbit. Until the end of turn 3) Lieutenant Galrauch is unavailable as a ground asset in this game. [He has taken control of the chaos fleet in orbit.]

Maximum number of extractions per turn:

Turns 6 and 7. 8 Extractions possible per turn.

Chaos has first turn unless the imperials can steal the initiative. (Note that the dreadnought hurricane has been deployed giving them a re-roll on this.)

The forces of chaos had gotten closer than normal as the unnatural fog had been thicker than ever before. The sky flashed with a myriad of colours as the warp raged. Daemons and daemon engines stalked forwards. The Men of the gallian 7th held the line alongside the unshakable dark angels. The enemies first orbital strike slammed into the defensive line but did little damage.

“A ranging shot.” Master Rael states as Cavros Thawne looked over the map of the defences.

“We need to hold out until your vessel can start evacuation procedures.”

“Indeed.” The dark angel replied as his personal watcher in the dark hovered nearby holding a relic of the chapter. “Master Ganon will strike once he is in range and Captain Kraken has the storm hawks ready to counter attack. Blood eagle has held back his assault elements and will join the battle when the time is right. We can hold long enough to evacuate.”

“I pray you are correct Rael.”

Stratagems used: Replacements: Cerastus knight atrapos. (This would give the largest amount of potential D attacks from the units that had been destroyed in the previous mission.)

This turn the imperium successfully extracted:

A dark angels command squad in a Razorback

The surviving members of the Kill team that was sent to rescue Virgil from the Alpha legions clutches.

Having completed their objective of capturing the fallen the dark angels Deathwing forces have teleported from the table.

The forces of the imperium successfully extract:

“It won’t be enough” Cavros states as he reviews the tactical map. More friendly icons were disappearing as the forces of chaos continued their attack.

“Where are the other enemy forces?” he shouts

“Our gunships have spotted both the alpha legion and emperors children moving in from the secondary approach to this facility. We have thirty minutes until we are trapped.”

“The gunships are focused on evacuation operations. We cannot risk them on an attack against a foe we know nothing about.” Rael states.

“Fear not” The Vox chimes. “We will counter attack to give you the time you need.”

“We are three minutes out.”

So far this game has been suitably brutal. This has led us to using the saying ‘dice happened’ as the amount of invulnerable saves I have been able to make has blunted the effectiveness of the ordinatus. Can the imperium hold for long enough to keep the forces of chaos from overrunning them? Find out in part 2.

“Tune in next time for the epic conclusion!”

It has been great following this campaign for so long. Cannot wait for the big finish.

Thanks Rory.
By finishing off our campaign the way we did we got all of the last vestiges of 7th ed. (re-rollable 2+ invulnerable saves, invisibility, double digit attack values for single models and the rather disappointing Ordinatus ulator out for the final time. Until something equally broken is discovered in 8th ed.)
My Deathguard army has already raised warning flags despite me not even having used it yet.

I agree with Rory. Going to be great to see the ending.

Have you all held off on playing 8th through the whole campaign?

Yep, we played extraction over the course of three days (Tuesday-Thursday) when we all had time off.
Since then we have played two games of 8th edition one 500pts and one 1000pts game (using forces who were not involved with the final mission so Black Templars vs khorne csm vs tyranids vs emperors children). The first game was the four player mission from the 8th ed rulebook. I won it by keeping a humble ripper swarm base on the objective at all times. (He survived three turns against a vanguard veteran.) The second we allied up (two teams of two, rolled for randomly. Where the unholdy union of black Templars and tyranids defeated the forces of khorne and the emperors children.)
We are now on our annual winter break from 40k. We have AVP, KDM, DSBG, Xwing, Space hulk and DW overkill to choose from before we go back to our weekly games of 40k in march. (And during to the time in between we are working away on outline plans for our next campaign.)

That’s cool. Always nice to have a steady and reliable gaming group.