A friend of mine had given me the Forge World upgrade to make a Chaos Knight Titan. The problem is that some of the parts have issues.

First up, the top carapace was super slick. After having soaked it in Simple Green for a week, and having washed it a few times during that process, the release agent was still there. It appears that the very unlikely chance had happened, the release agent molded with the resin.

I took to Facebook and Twitter with my problem, and Vidpui had answered. His recommendation was to seal the part with a matte sealer first, then prime it.

I gave it a shot, and I sealed the entire thing with a pretty heavy coat of matte sealer. Normally the matte sealer will be dry in around 10 minutes, but 30 minutes into it there were still some wet spots. Most had dried, but a few problem areas were present.

I curbed my desire to mess with it, and I let it sit for the rest of the day. The following day I checked on it, and amazingly the entire thing dried, and dried matte! See below.

The next problem to tackle was that the top carapace had some very thin areas in the resin. So much so that there were holes in spots. The holes had become more pronounced with my vigorous cleaning of it earlier as well.

To fix that, I went in with green stuff and sculpted in some more of the armor tears that are already on there. I went over the holes and tried to match things up as best I could.

That taken care of, the final problem was one of the shin armor plates. A huge chunk was missing out of one of them.

I didn’t want to fill that whole area in with green stuff, that would be a ton of work, so I decided to build it up, and then finish it off with sculpting.

I started off by putting a very thin piece of plasticard behind the plate, and then cut it to shape.

Using more plasticard, I began building it up and getting the shape more refined.

From here it was time to blend things together with Green Stuff, and flesh out the details.

I have to admit, I’m really pleased with the fix on that shin plate. I knew how I wanted to fix it, but I thought for sure I’d screw something up. Instead, I think I nailed a pretty spot-on repair job. It’s something I’ve noticed with my sculpting, I can replicate pretty well, but doing creative things tends to get me. Oh well, we all have our strengths.

Now that the hard work is done, it’s almost time to get things primed. I’m doing some small gap filling on the Foe-reaper Chainsword, and also waiting on magnets to come in for the torso.

Normally I would probably be painting this Chaos Knight Titan by next week, but life has intervened, and I won’t have a free weekend until April if I’m lucky. So, things will progress but at a very slow pace for a while.

Update: The Knight is completely assembled and painted. You can check out the completed Chaos Knight Titan. 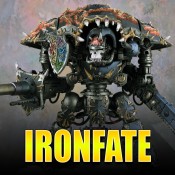 Man with that kind of model damage I would have contacted Forgeworld about it. Especially for the thin resin and broken peice. Good to know Matte varnish can help with the release agent when it won’t wash off.

I tried contacting them, and I got no response. I got it off Turner, who got it from someone he bought something off of, or it was a mis-ship, something like that. I didn’t expect much from FW, though I was hoping.

As far as I know, FW won’t replace parts unless you have your order number.

I figured as much.

Stellar work on the patching up and re-sculpts. Such a lovely kit too.

Thanks. It was actually fun doing the work. Usually I hate fixing things.

It is an awesome kit. I can’t wait to get it all together and see it completed.

Wow, I wouldn’t accept such shoddy casting. From the comments it looks like you had no response and thus no choice other than to soldier on.

If I paid for it, I absolutely would have insisted on a replacement.

Yow. I think that’s the worst cast I’ve ever seen from FW. Excellent job on fixing it up.

And really, that’s one of the awesome things about Chaos. You have so many more options when it comes to fixing stuff like this.

Agreed. I love Chaos for the fun conversions and over-the-top stuff you can create. It does make repair work easier too :)

I both love and hate you. Mainly jealousy. ;)

Great work on the repair job though man. Once painted it will blend perfectly.

Thanks. Yeah, I think it will work in flawlessly once everything is painted.

I wouldn’t surprised if these part have been replaced already by FW, and the funky bits traded and handed down until they reached you. Great work fixing them up.

You’re probably right, and thanks.

Sorry you are having such trouble with the kit. The matte sealer is quite a brilliant move. I know he’s said that before, but I tend to forget now and again! You know exactly how excited I am that you are working on a chaos knight!

It’s all good. Sculpting is my favorite part of the hobby, so I can’t complain.

I can’t wait to get rolling on this thing. I’m nervous and anxious at the same time.

It’s a bummer about the miscast and quality of the resin. You’ve done a great job recovering from the problems though. Now it is truly a “custom” build.

Thank you, and I may find myself doing some other work on there as well to add some more customized detail.

Great job on the shin guard. Broken pieces can be a huge chore to fix can’t they.

That’s the nice thing with this, it’s so big that fixing it was way easier than I expected; but yes, it can be a pain to deal with.