Finally got this guy wrapped up and I’m pretty pleased with how he came out.

I’m one of those people who paints based on value and position. Meaning my HQs and elites see more love than troop choices.

However, with my Plague Marines in general I’ve spent more time on them then I would a normal Chaos Marine. My Sarges/Nobs/Champions always get more time then the rest of the unit but still not as substantial as other models I’ll paint for the army.

Here’s some shots of my Plague Champion. 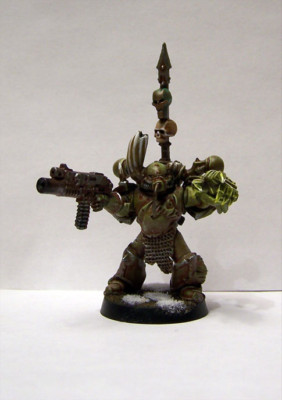 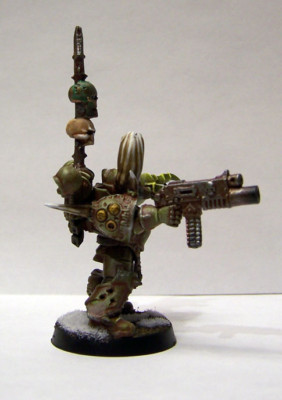 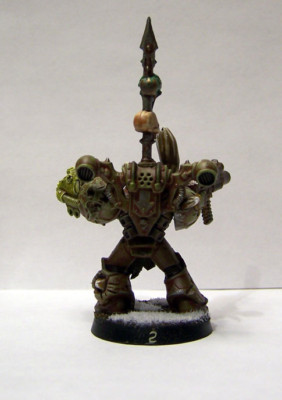 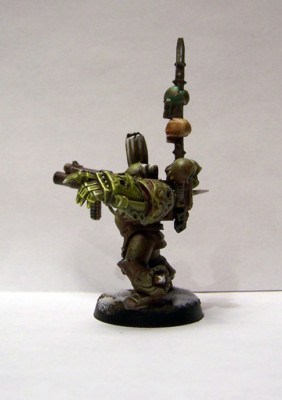 The shots are a bit darker than I’d like. Still working on a better setup.

Anyway, I did some green stuff work on this Champion to convert him from a normal Chaos Marine.

I added some plaguey details here and there and sculpted him a large horn for his helmet. I also drilled  the Nurgle symbol into his leg for some detail.

I then do a final highlight with rotting flesh. This gives the model more earthy tones and is not as bright a green as I often see with Plague Marines.

The fist I’m really happy with. I wanted to get a sort of glowing puss look to it so it’s dry brushed up from black with 4 shades of yellow then a highlight of the lightest yellow and white in a few spots.

It’s not how I’ve traditionally done power weapons but I feel it fits perfectly with the Plague Champion.

It was a nice change of pace working on this Plague Champion. It’s fun to do something different that’s a bit more free with approach than the usual.

Nice. What’s that on the side of his head? A barnacle?

It’s a smaller horn than the one on the right. Hard to tell with the poor lighting.

Thanks. Pretty proud of the pestilent fellow.

I like the subtle, sickly glow of the power fist.  Nice work!

These guys are fun to paint. I’m trying out new techniques and it’s easy to avoid the burnout I had with my Marines.