It has been a reasonably productive week, I’ve managed to paint 4 of the 10 lootas I built.  I’ve gone with a lot of dingy metal and a few spots of Deffskull colors.

I’m painting these one at a time so I can put a little character into them but with roughly 40 models to paint between now and November 10 (for the Standish Standoff) I have to maintain a decent pace.  I hope to make up some time by batch painting a bunch of boyz later on.  If the lootas perform well I’ll return to them at a later date to add some tatoos and other details. 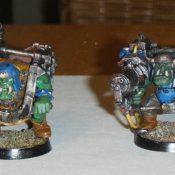 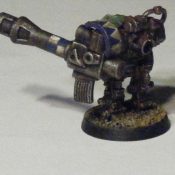 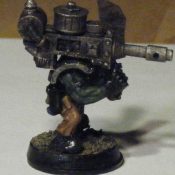 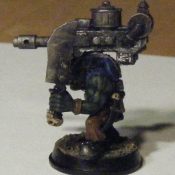 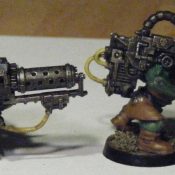 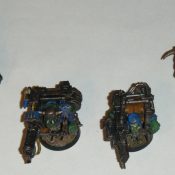 Nice job. I’m really digging these, especially the Grot with the robotic legs.

Thanks! He’s my favorite so far too. I really like the scale of the gorkamorka bits to the gobbo head. I’ll be doing more similar conversions in the future.

Wow! You’re cruising along with these guys. It will be nice to see some Orks again, I don’t remember the last time we saw them at XRG. Do you have plans for a Orky display board for these guys to hang out on?

It has been a nice change of pace to work on the orks again, though I haven’t had a chance to get any games with them yet.
I have some loose plans for a display board but I doubt I’ll have time to build one for November. I may just add some of my orky terrain to my current tray.

Just a quick dirt surface so their bases fit in and your terrain would be great. You can always make a Mek workshop(bastion) later on to add and/or use in games.

That’s true. If I can find some spray paint that is close enough to the base color I could knock that out in no time.
I am planning to do some fortifications at some point. I’ll probably start with “A jus’ da fence line.”

GW’s Ork barricades are really cool. IDK if they are the same length(overall) or height but they’d save a ton of work making them from scratch.

I agree, they do look very cool. But I’ve got a box of random bitz I’ve been saving over the past few years for the purpose of barricades so I should be able to knock out a row of them in an evening. 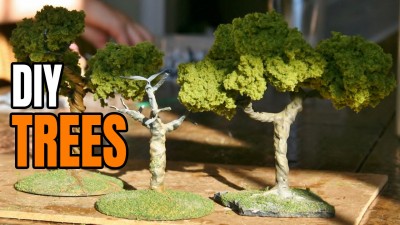