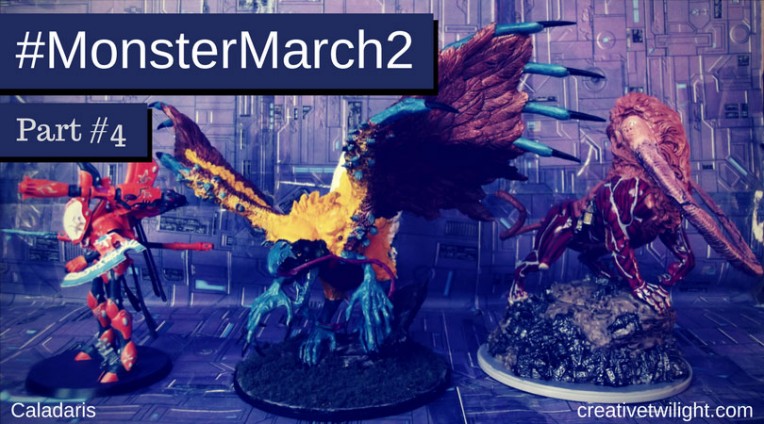 The tale of the wanderer is a sad reminder of the fall of the Eldar race. A smaller craftworld that was known as the bastion that seeks the moon was caught in the path of a monkiegh fleet of considerable size.

The wanderer stood with his brethren as the enemy attacked. The enemy had seen through their seers conceal rune cast and with meticulous efficiency they tore through the small craftworld before facing the wanderer before the world’s sole Webway portal.

The wanderer struck down all who approached and the attacks continued until only he stood standing. His wraithbone skin fractured and cracked from battle and even so he would not yield. As the enemy massed for a final assault they separated to allow a cursed machine to stride forwards.

The monkeigh would have called the machine a contemptor but the warp knew it as a Mhara Gal, a cursed one. With his powers recoiling by the mere presence of the creature that should not be, the Wanderer still fought as the shroud of black fire licked at his frame. calcifying the exposed wraithbone around the damage he had already suffered. The wanderer buckled under the assault and fell into the webway portal.

As the Mhara Gal roared its victory the Webway gate fell inert and collasped. Lacking any remaining stability, the small craftworld began to break apart. Scattered to the winds by the enemy’s guns as they finished their extraction.

Awakening in the webway the Wanderer could no longer remember his home but was infused with a earning to return there. Standing tall the heavily scarred construct began to walk.

In the ten thousand years since the wanderer has emerged from webway gates all over the galaxy. Helping any Eldar he finds while smiting those he deems as foes. On four separate occasions the wanderer has fought with his ancient nemesis the Mhara Gal and each time neither has landed a killing blow.

And so now known to all craftworlders as ‘the wanderer’ he continues his eternal search for a home that no longer exists. 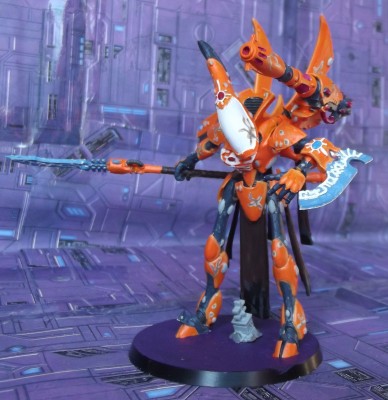 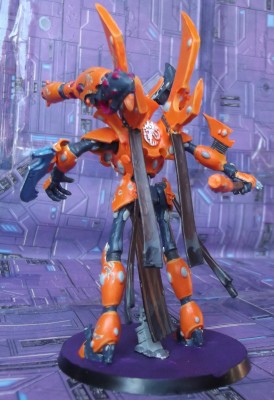 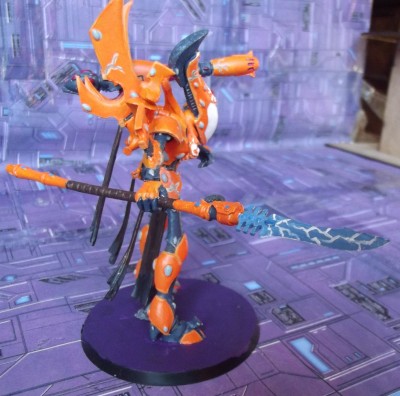 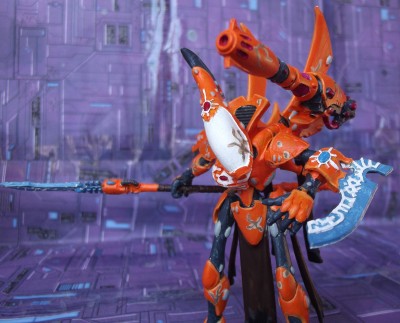 I am very happy that after its years spent languishing in my projects box that this guy is finally finished. I made one error during construction where I misplaced the fins from the D cannon but then again there was no instructions and I have never built any other Eldar models before, I may add some runes to the burnt robes in the future.

Base (Place holder. I want to do a webway styled base eventually) P3 Beaten purple.

Although where would this guy be without the antagonist from the story above. 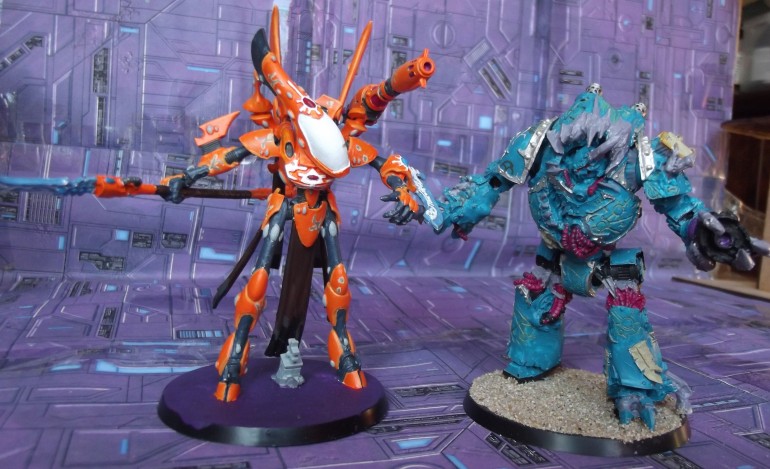 The Mhara Gal was in the process of being finished off at the start of the month. He still needs some more attention before I deem him to be complete. He has joined in with the festivities to menace his nemesis.) 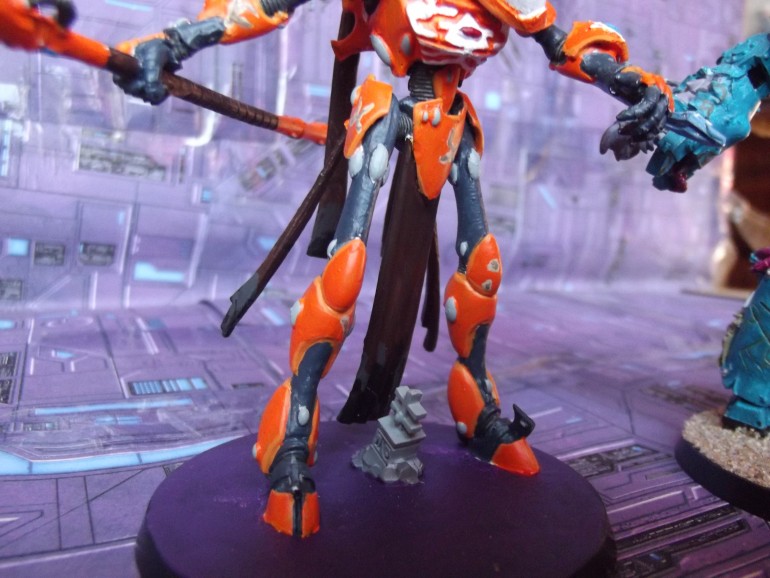 This is where the idea for the burnt robes came from as the Mhara gal is said to enveloped in a shroud of dark fire. 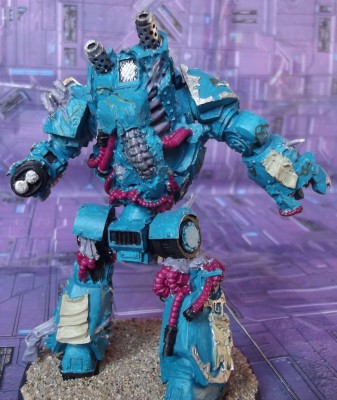 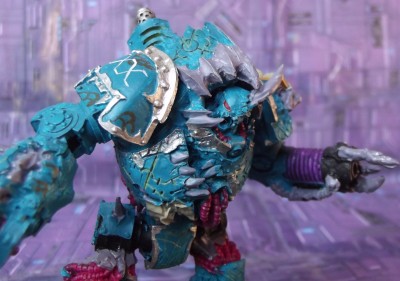 The Alpha legion Mhara gal says hi. In 30K you can steal other armies’ exclusive units of which the Mhara gal is one. In 40k He counts as a hellforged contemptor dreadnought.

A gallery of my finished monster march projects 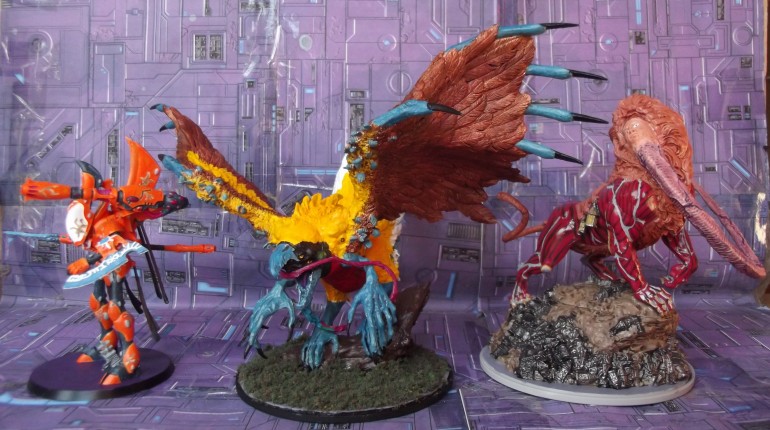 The wraithseer, phoenix and Lion god line up for their time in the spotlight. 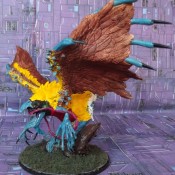 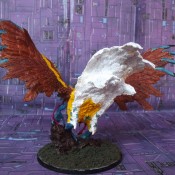 The phoenix in all of its glory. The Lion god steps up. The Face needs some more work but I am otherwise happy with my chosen scheme. The wraithseer is already well photographed but a couple more cannot hurt.

These images were taken in my (Broken) Lightbox with natural light saturating the room I was taking the images in. The backdrop is the only one I still have and it is less than ideal as it was intended for photographing customised transformers: An example of the lightbox and its original use. (When it was working correctly before it broke)

Now when people mention crossovers between IP’s I’d love to see what would happen if GW and Takara Tomy/Hasbro teamed up to make some WH40k Transformers. Links lead to my very low res megaton baneblade concept idea, and that is a discussion for another time, but with the apparent popularity of 40k in Japan anything could happen.

With this for me Monster March comes to a close (good luck to those still beavering away, seeing all the other projects has been a great inspiration) during the month I assembled the Wraithseer and then painted him along with the Kingdom death Lion God and Phoenix (Which I had already assembled) to a decent standard. I played with washes and effects to get the look I wanted and even wrote a small bit of fluff to explain why an Eldar wraithbone construct would suffer lasting damage when it can normally heal itself over time.

Thanks to Swordmaster for running monster march and thanks to all of those who have commented, you guys have been very helpful.

Nice work. Getting 3 of those guys done is pretty impressive. Also, trying out new techniques with painting is what keeps it interesting; at least for me.

Thanks, New techniques are always handy as they can reignite long dead projects & give you new ideas.

Monster march did this for me. I was at one stage going to build an eldar wraith army as I have always loved the theme and look of the wraithguard. I stopped and sold off everything [bar the wraithseer] when all Eldar D weapons became actual D weapons. It just wouldn’t have been fun to play against, so I cancelled the project. (I sold off a necron army once during the era where they had the phase out rule in the codex because damn they were powerful, AKA not fun to play against and thus became boring to play with)

Looking onwards I have some more KDM models in the painting area (I am playing monster hunter world and God eater 2 rage burst and the ideas are forming) & I’m really looking forwards to getting my grubby mitts on the daemon moritarion model (then attacking it with washes, weathering powders & gloss varnish) but first I need to finish what’s left in my to do pile. {I promised myself to not buy anything until I have completed the models in my pile, Time for an April assault!}

Yeah, learning new stuff really pushes the motivation. I find it always makes me want to redo old models too, ones with simpler techniques, but that’s a vicious cycle that will never end if you pursue it. I mean, you’ll always improve, always learn something new, and forever be going back to “fix” old stuff.

I still have the first ever model I painted for 40k. I’d rather not re-do my older stuff as it then shows me just how far I have managed to progress in how I paint minis since then. (My blood angels army is never going to win any painting competitions but I’d rather retain them as they are and preserve the memories I have of using them.)
Moving forwards I can employ what I have learned to continue to improve.

Good work getting everything finished to this level and trying out new things. Always a fan of some backstory to a model as well.

Thanks Rory, I enjoyed painting something different to my normal schemes. {For the phoenix I wanted to avoid the usual cliché schemes, hence the BoP idea. The outcome is better than I would have thought though.}

Awesome work, and you ‘ve take out some nice pics that underline your good job!

Monster March is awesome, and I’m frankly sad that I could not partecipate this year, but looking at nice monsters is always cool. Hoping to partecipate next year!

Thanks stats. While the lightbox is still broken the natural light worked out really well. {that and I set the camera up correctly}

Coming back from a hiatus from blogging (and the hobby, sorta) is there anything for painting comps in April, ala Monster March and Dreadtober? Digging how flat you got that orange, can never seem to get it right unless I go far too brown with it

Admin
Thor
Reply to  The Warlock

Good to see you around.

I don’t know of anything for April, but it’s possible there’s something out there. However, I haven’t seen any buzz on Twitter about anything lately.

The Warlock
Reply to  Thor

Thanks Thor, gonna start posting stuff soon. Gonna check if I can find anything but there’s plans afoot

Kenneth Raymond
Reply to  The Warlock

Thanks, The orange paint I used worked really well. (It was far better than the GW oranges I have used.) I undercoated the model white and worked from there, I applied four thin layers of orange fire paint to the model and two of the lighter P3 ember orange on the edges of the armour plates (and the sharp edges of the rear fins).