I was a bit burned out on painting and modelling after the April Assault so I decided to take a week off.  It’s a hobby so there’s no point doing it when your heart isnt in it.  As a result I don’t have much to show you this week.  For the April Assault I did a writeup for my list which gave me a chance to flesh out some background for some of the more notable characters in the chapter. I had a copy of this attached to my last post, but I thought I’d expand on it a little bit.

To start, here is the list I took to the assault:  http://cmdctr.net/lists/reavers-the-young-and-the-restless/

This 1500 point list represents a point roughly 200 years after the fall of Herjolfsnes that stranded the Reavers on the space hulk Nidhogg.  It features several characters that would later rise to great prominence within the Sagas of the Reavers.

Raemos the Young, the Iron Dragon, the Sun-Fist:  As a youth on Fenris Raemos quickly demonstrated a variety of aptitudes.  He was a skilled weapon smith and cunning hunter.  The bearlike strength forged at the anvil made him a powerful warrior; his cunning and charisma made him a natural leader.  When he set out on his pilgrimage to meet the Gods of Iron it was assumed by all who knew him that he would succeed in his journey and be accepted to live amongst them.  As an Iron Priest Raemos learned the intricacies of all the Space Wolves’ tools of war but it was his prowess and fearlessness on the battle field that earned him a place amongst the Wolf Guard.  Again his charisma and cunning caused him to stand out, a leader amongst heroes.  Over centuries of battle Raemos served as Battle Leader and eventually became Wolf Lord of the Black Wolves.  Through all of this his passion for the mechanical arts remained undiminished.  He remained close with his brothers of the forge and maintained that a warrior must know his war gear well lest it fail him.  When Herjolfsnes fell to Chaos Raemos was amongst the last to leave the planet, his broken body carried by the sole survivor of his Wolf Guard.  Despite ruinous injuries his spirit refused to yield and he was entombed within the dreadnought that he himself had been working on before he fell.  In the time since his entombment his time not spend advising, training, or leading his brothers in war are spend consulting with the Iron Priests on the archaic and alien technologies found on the Nidhogg.

In this list Raemos is fielded as a Venerable Dreadnought.  I built him to count as Bjorn the Fellhanded and often field him as such.  He was the Wolf Lord of the Black Wolves when they fell at Herjolfsnes.  He’s become comparable to Bjorn in a relatively short amount of time (less than 2000 years) because he’s been working with the Iron Priests to improve his dreadnought.  The Reavers have a more pragmatic approach to technology which has even included the re-purposing of xenos technology since their fall.  This in in part due to the need to utilize any available resource, but also largely a result of Raemos’ guidance.

Ulfar the Restless, the Faithfull:  Ulfar is a warrior of great prowess who rose through the ranks to become a member of Raemos’ Wolf Guard.  In the final hours of the battle for Herjolfsnes Raemos and his Wolf Guard stayed behind to hold off the hordes of Chaos while the locals and vital equipment were shuttled to Jotenheim for evacuation.  The combat was fierce but they held their position until all but the final shuttle had left the landing station.  As they fell back toward the shuttle a Greater Demon materialized and threw itself into the melee, slinging broken marines aside like rag dolls.  One by one they fell as they struggled to repel the unholy terror.  When Ulfar slipped and stumbled to the ground Raemos reached out to help him back up.  In this moment of distraction the Demon caught Raemos off guard, slipping past his storm shield to drive its claws through ceramite and flesh.  In a frenzy, Ulfar leapt to his feet as the world around him dissolved into a blood-red mist.  When his senses returned to him Ulfar was standing just outside the shuttle doors bearing Raemos’ broken form in his arms.  Ulfar blames his own clumsiness for the fall of Raemos and his fellow Wolf Guard.  He has sworn to redeem himself or die in service of Raemos his former Wolf Lord. 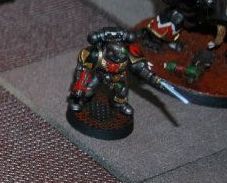 In this list Ulfar is represented as a Lone Wolf.  Through countless battles he will remain by Raemos’ side.  When he finally falls in battle he will be enshrined in the dreadnought Clangor so that he may continue his service to Raemos.  The model I used for this is usually a Wolf Guard.  Ulfar Clangor is the name of the Dreadnought that I often field as Raemos’ sidekick and I thought it would be cool to give him some back story.

Thufir Skullsplitter, the Just:  With Raemos entombed and the last of the Wolf Guard, Ulfar, bound by an oath of vengeance, there was no fitting candidate for Wolf Lord.  With the Great Company shattered, and thousands of refugees to manage the need to install leadership with a minimum of conflict was apparent.  A council of 12 were elected from the wisest and most respected of the remaining Black Wolves to lead the refugees until Raemos could be revived.  Most of these came from the veteran Long Fangs and Wolf Scouts, but a few of the more respected Grey Hunters were also included.  Among them the Council appointed Thufir as the council head due to his reputation for fair judgment and sound reasoning.  When revived, Raemos deemed that the Council would remain as his advisors and elevated them all to his Wolf Guard. 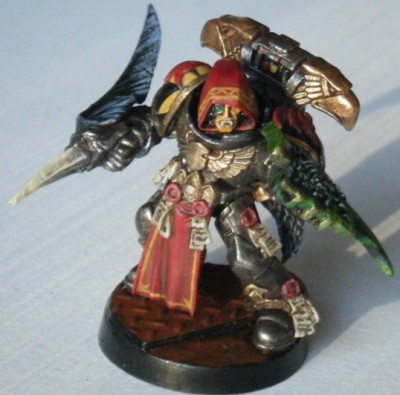 Thufir is represented in this list as a Wolf Lord.  In time many other members of the Council will also become Wolf Lords but Thufir will surpass them all to become the Great Wolf of the Reavers.  For this list I used the model that usually represents Arngrim the Swift.  Eventually I plan to build a counts-as Logan Grimnar and Thufir will be the character to fill this role.

The Reavers have been able to recruit new members from the refugees aboard the Nidhogg and so have grown from the original Great Company, but they don’t have the resources or numbers of a full chapter.  I imagine there are around 300 of them in total.  These are broken into several companies that are all smaller than a typical marine company.  There are not enough Wolf Lords to fill the 12 seats on the Council so the remainder are filled by Priests of the chapter and some senior Wolf Guard.

The symbol of the Council is the Sword of Justice, an aesthetic rip off of from the Dark Angels ;)  Members of the council will feature the sword as part of their chapter symbol, flanked by the dragon wings of the Reavers icon.  Those who have acted as agents of the council will display the sword icon in other forms.  This allows me to incorporate a lot of cool Dark Angel bits into the army.  I’m planning to incorporate most if not all of my HQ into the Council and many of the Wolf Guard will be agents of the Council.

I’m playing with the idea of Council agents called Arbiters who travel amongst the towns on Nidhogg to enforce the decisions of the Council and settle matters of dispute between towns. These would be Reavers who have demonstrated an ability for leadership as a way to build and demonstrate the ability to make just decisions and enforce the laws of the Council without always relying on brute force.  They would also lead excursions into unexplored areas of Nidhogg, or onto ships and planets that Nodhogg encounters.

Arngrim the Swift:  Chosen from amongst the ranks of the Grey Hunters, Arngrim was the youngest member of the original Council.  In this list he is represented as a Wolf Guard.  He will eventually become a Wolf Lord.

I haven’t come up with much for Arngrim’s back story.  I usually field him as a Wolf Lord and sometimes a Wolf Guard Battle Leader.  On the table he’s performed some remarkable acts against Tyranids and Chaos marines so I may work that into his story.  I picture him as a fairly standard Wolf Lord, but any Wolf Lord is pretty bad ass.

Before I get too far into any new projects I still have some clean-up work for the models I used at the April Assault.  The rhino needs some free hand work.  One door will get a chapter symbol.  I don’t envision the Reavers as having enough transports to dedicate one to each pack.  They are designated as needed to suit the mission at hand.  For that reason they won’t get symbols to match the pack they’re transporting, though I may give the motor pool its own pack marking.  I may also give them magnetic pack plates to remind each pack which ride it’s supposed to be in.

Most of the models still need chapter markings.

The speeders have a lot of unpainted details.  They’ll also need some pack markings and bases.

The Wolf Guard need some free hand and detail work.

Raemos needs a minor repaint.  I think he’d look better with a little more color on the arms.

Most of my drop pods need some highlights and details.

So, I’ve got plenty of stuff to work on.  Now that the break is over I’d better get back to it!

Awesome work on the dreadnought. I almost spit-taked my green tea when seeing it the first time. Bold and executed well, sir.