I was going to give a dull intro to this with the usual stuff I say proceeding a battle report. Instead, I’ll change it up a bit.

I have been using Abaddon a lot lately. He’s finally where he should be in terms of effectiveness (in my opinion), and it’s hard to not try him out. I’ve had a lot of luck with him in my games, so I’m trying to build something solid with him at the core.

As for the game below, I do not yet own an Abaddon model. I’m going to buy the awesome one that Wargame Exclusive sells once it’s back in stock. Meanwhile, he’s the terminator Sorcerer in the report named Maelstrom.

Disciples of Twilight vs Grey Knights 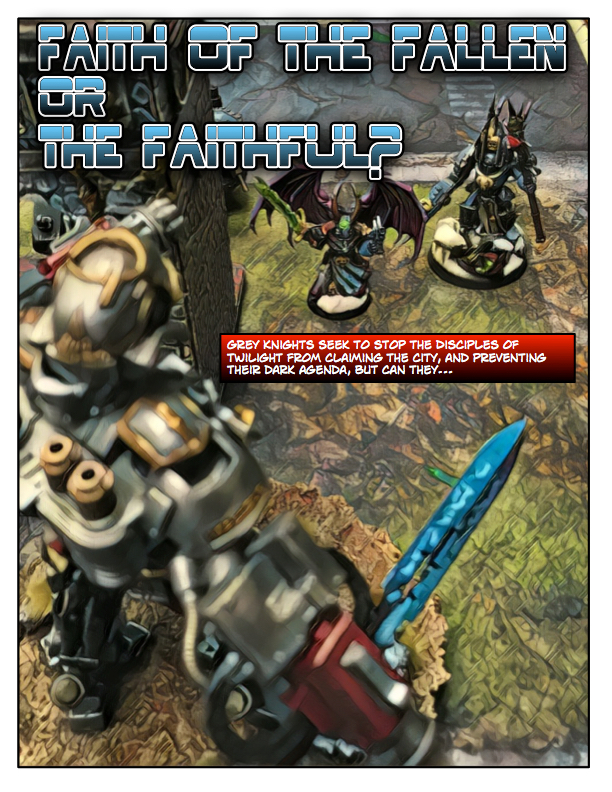 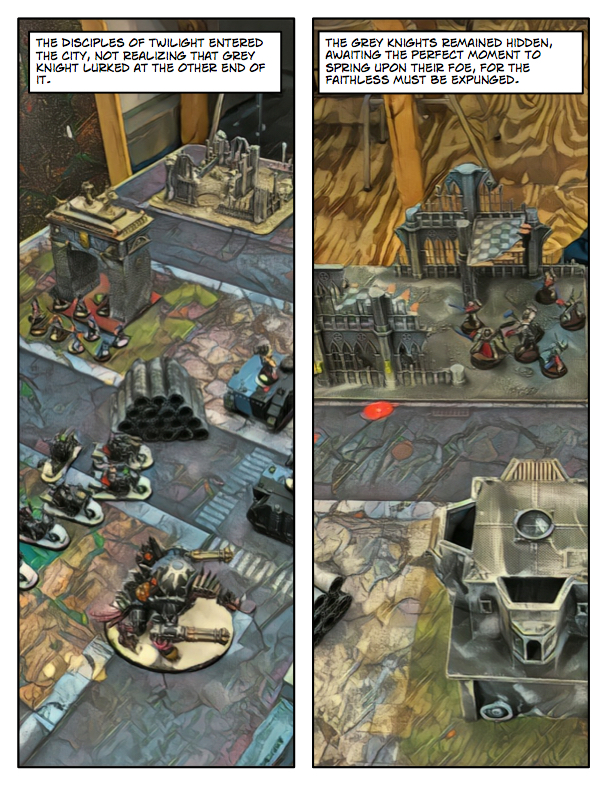 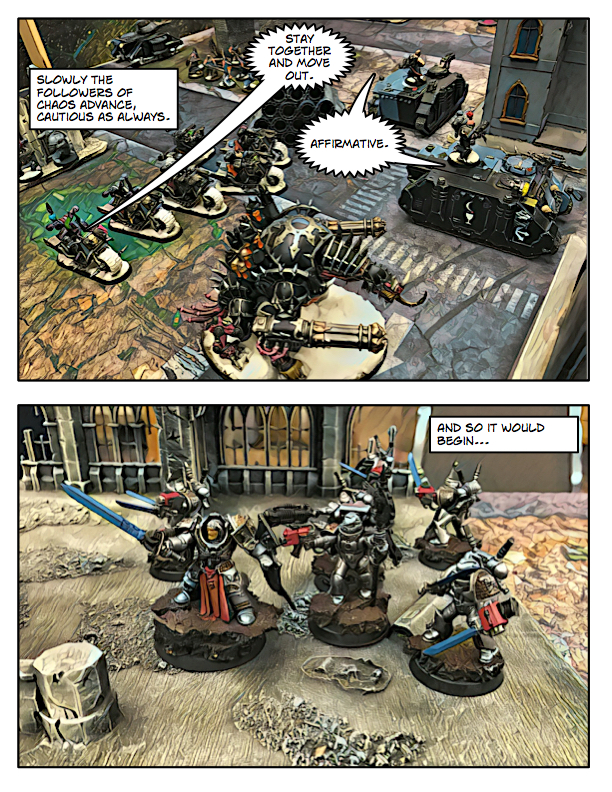 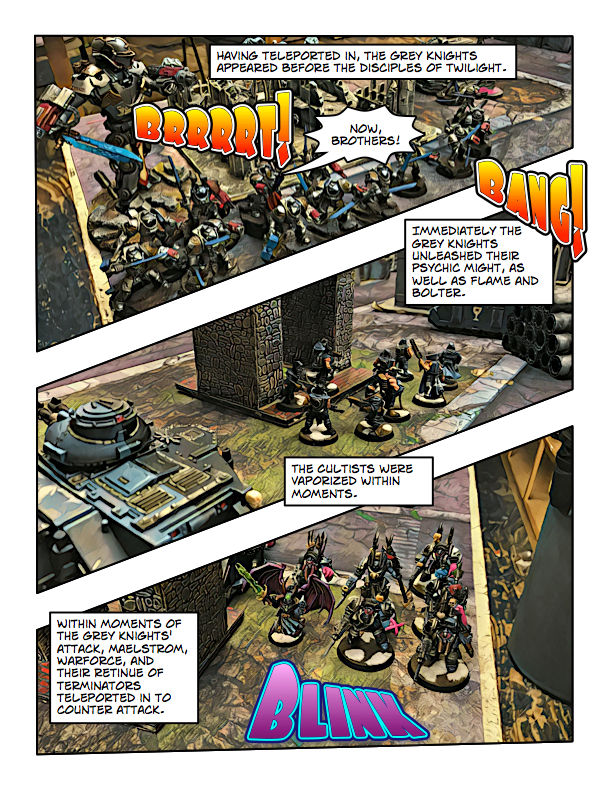 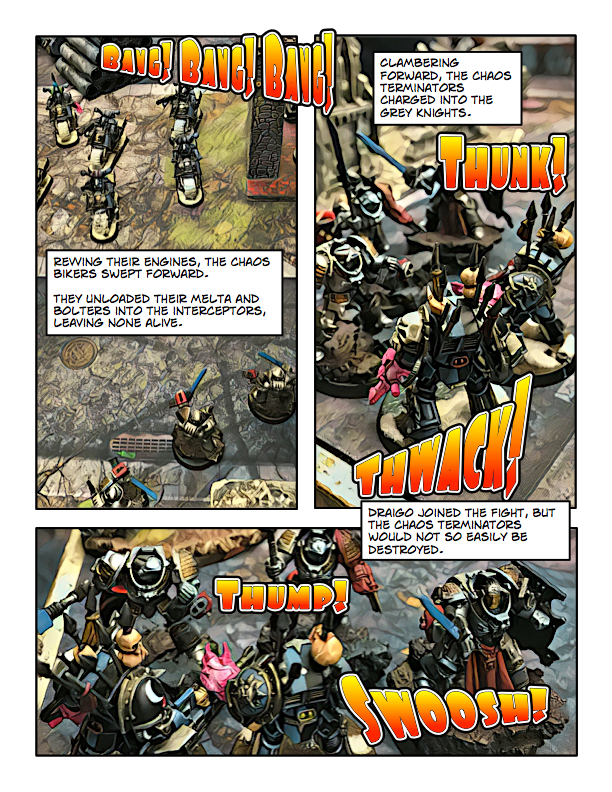 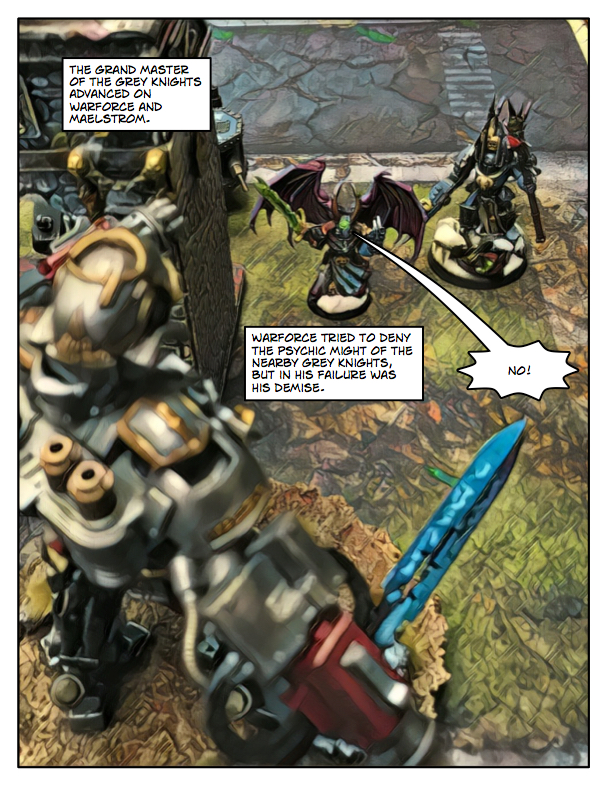 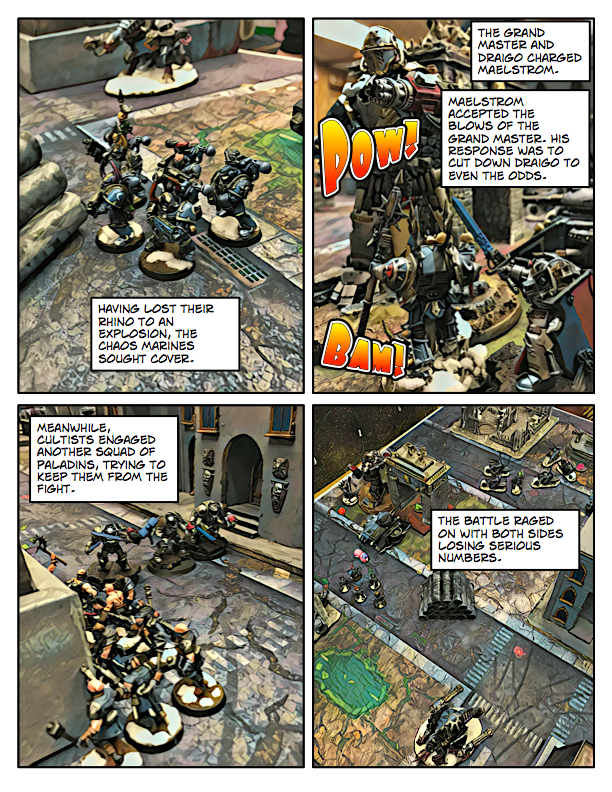 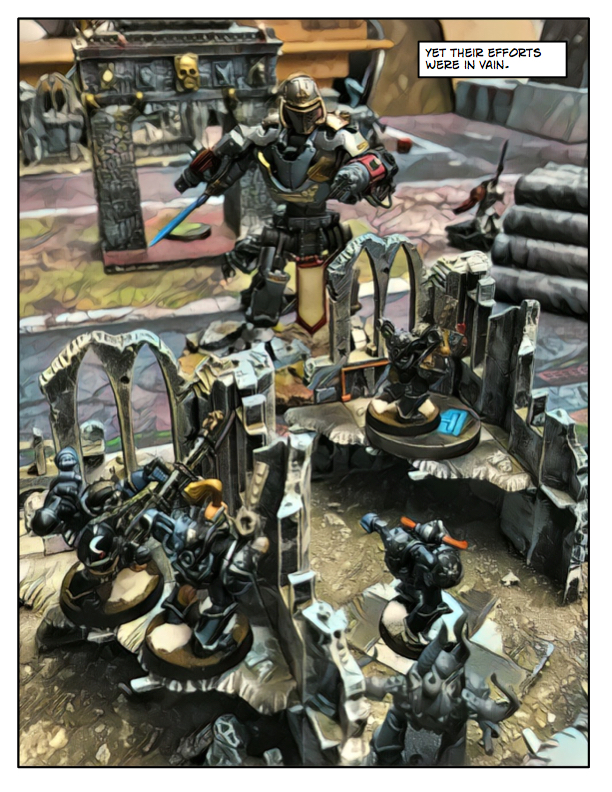 It was a great game. Early on I put a lot of hurt on my opponent. I was rolling well, he wasn’t. I was confident by turn #2 that I had the game. However, as Maelstrom games go, he was able to climb back into the fight and take the lead to win the game.

The Grand Master in Dreadknight was insane this game. The model won him the game. Not only was it blowing over my units, it was making saves like a champ. I just could not touch it.

I’m still really liking Abaddon. It’s hard not to I think. He didn’t do anything amazing this game, but his aura buffs were useful, and he did remove Draigo.

Saturday is the 1,750pt tournament we’ve all been preparing for, so let’s see how I do with this list there. Pow! Bam! I do not read comics neither play, I always read your comic book battle report!

I appreciate it, or Lo apprezzo – if that translated right ;)

Sì, è corretto (yes, that’s correct): the the “I” pronoun subject drops and the object is the first word, while the verb is well declined!

If there are features I love of English is its rationality, order, “simplicity” (in Italian, the simple present has 6 different word, one for each person) and regularity.
Despite sometimes I mess with it lol!

I’ve never learned another language, but it’s the structure of the language – like you said, that would make it hard. Learning words is easy, learning how to say a sentence is much harder.

I’m the other way around. I can learn grammar and such easily, but have trouble picking up much vocabulary.

Actually, learning German in particular was really interesting, because so much of English grammar still has some relation to its Germanic roots, even tho the two languages have diverged big time over the centuries. It was cool to find all those connections.

I’ve never truly tried to learn another language, so I could be selling myself short too. It seems like I’d struggle with grammar, but I could certainly be wrong.

I do enjoy seeing language connections. I spent 2 months in the Netherlands many years ago for college. They did start teaching us (2 other exchange students) the language, but it was fleeting. However, it was neat to see the German, French, and even English influences on their language.

Yes, if I remember well German, French, Spanish, Italian, Portuguese and other East Europe languages have the same indo-european roots, also influenced by Latin (lot of decliantions of verbs, male and female nouns,adjectives, pronouns, articles and so on). Latin is reflected also a bit in English language, above all imho -I am not a language student- in similar words.

Sounds right to me.

Thor: In general, I’m better at learning systems than learning individual bits of information. It’s also why I was way better at Linear Algebra than at Calculus.

Stats: German and the other northern European languages have little or no Latin influence, but do share the same Indo-European roots. English is something like 50% Germanic base, maybe 40% French (Latin-derived) mixed in thanks to William the Conqueror, and then the remaining 10% was stolen from pretty much everywhere else. Because it doesn’t use much in the way of declensions, case-markers, or gendered nouns, English is really good at adapting words from other languages.

I hear you. I’m a programmer, but languages are a loose logic and that’s what gets me.

As in so many exceptions to rules and structure.

You are nailing the shit out of the comic book format! I love reading these battle reports, Thor. Keep it up!

Nailing the shit out of it is the goal, so glad to oblige; and thanks!

I loved reading that report, bravo. I would personally prefer a little less diffusion in the filter but very good.

Tough report and all but very enjoyable. Glad Abbadon is working well. Really tempted to run him in a full terminator list.

Haha! I used 60% on the filter this time instead of 50% and you noticed. Good eye. I was wondering what the feedback on that would be.

Terminators are surprisingly good this edition. That type of list would work very well with lots of combi-weapons.

That was awesome! How did you make that?! Is there some specific program or did you do it all the hard way. Super-cool approach, dude!
In other news, my return to the States is in sight now and I look forward to actually playing a game sometime in the not too distant future!

For the image filtering I used a phone app called Prisma. I then imported the images to my Mac and used an app there called Comic Life to do the rest. It’s actually really simple, just time consuming.

That’s great. Where do you and the family plan to settle once back?

so far looking like ann arbor, MI is the destination. should be heading back stateside around feb-march. :)

Great, great great. Love this way of telling us the battle

I find reading normal battle reports boring, so I like creating mine so they’re fun to read.

I love this style. You need to link together a campaign of these get you a few story arcs going.

That’s a good idea. Set up some games to work out something narrative.

Boom! Another great comic report (I’ll admit this is a reread for me, caught this from some site or another). Related, I dig your Chaos dudes, and I get a very Decepticon vibe between their colors, names and stubborn return to battle despite past misadventures.

That’s very perceptive of you. The scheme is indeed intentional to convey a new beginning for them. A shedding of the old and acceptance of the new. You’re the first person ever to realize that. Well done!