I wanted the incredible firepower this contraption spits out (4 blast markers per turn) but didn’t really want to spend the money on the very expensive and bulky GW model.  So I started figuring out how to make my own.  I had access to lots of syringes (though not a drug addict), so I used a large syringe, sawed out the middle, sanded down the inner edges, and glued the ends back together, making the primary piece of my cannon.  I then glued vehicle kit bits on to give it more character.  The quadruple barrels are just drinking straws painted black with silver edges.  For the track I used (you guessed it) epic-scale landraiders!  Bought a handful of them for cheap on ebay.  These I stuck together using paperclip clippings.  The rocker in the middle is a turn-screw bit from my old desk (the one my then-girlfriend now-wife sat on when it was up on its side in a storage module, breaking it to smitherines – she’s not big, I swear, it was just a cheap desk).  So for literally a few bucks I had myself a very workable and decent looking engine of destruction! 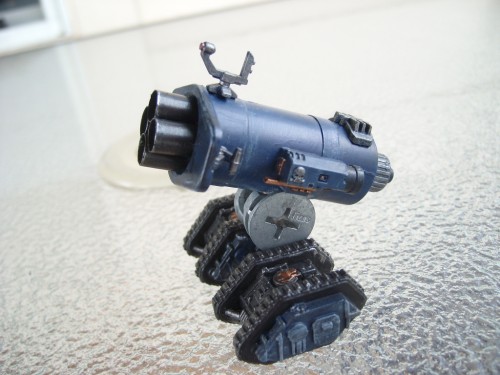 The cannon I really haven’t used that much, but when I have…  Oh boy.  It rains death down on the foe with FOUR small blast templates a turn and has three ammo modes.  Surface detonation: S6 AP5;  Airburst detonation: S5 AP6, ignores cover saves; or Subterranean blast S4 AP- with a tremor effect that inflicts difficult and dangerous movement on the target’s next move turn.  It’s great against clusters of troops.  I use the AP value to my advantage, or if their cover save would be better, use the airburst version.  At S5 or S6 you can count on wounding most of the time.  Against vehicles or a target you figure you just can’t hurt, try the tremor effect and let them hurt themselves on their next move.  I’ve used it on Space Wolves, preferring the S6 hit to give me more wounds, thus playing the odds against his 3+ saves.  Against Dark Eldar wyches I used the airburst, the AP 6 enough to cut their wychsuits and ignoring their cover saves, leaving those wounded on 2+ with no choice but to die.  I think I did use the tremor against a chaos predator before but it just sat in the back on the board edge and fired its guns (which is why I sent in my assault marines, who bounced along the armored column destroying tank after tank with grenades). 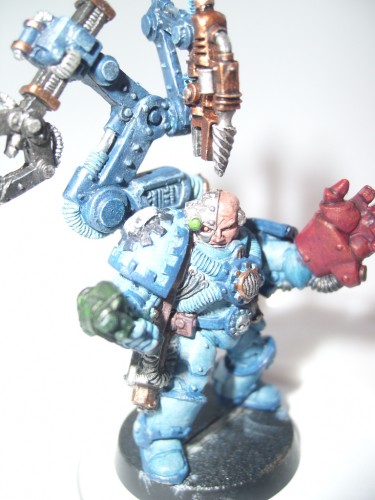 The Tech Marine comes with a full harness (hell of a bargain at 100pts for the whole package), which I tried to somewhat represent with the addition of another servoarm-drilly-bit (and hope those I play with don’t get offended cuz it ain’t the official 4-armed harness).  I painted his armor lighter blue washed with darker blue to stand out as artificer armor.  His head is appropriately bionic and his big hand (can’t really equip with a power fist) fits well as a Crimson Fist icon. 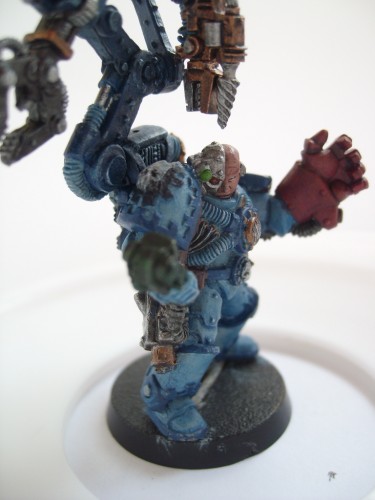 I call these tech marine pictures my “Dr. Doom” shots—he just looks like an evil plotting supervillain from this angle.

Very clever creation you have there. I often thought about a way to build my own, it’s a damn expensive model, and now you’ve given me some ideas. Yours looks great. The addition of bits really brings it all together. Well done!

Awww, the little Land Raider feet are cute!
It’s a great unit. It was good in 5th, and even better in 6th with the new artillery rules and wound removal rules. I run one pretty often, though I splurged on the official model back whenit was first released in metal. I didn’t find it all that hard to assemble, as most of the Internet did.
My only complaints about the TFC in 6th is its static nature and the inability to join my Master of the Forge to it for mutual benefit. Because the TFC can’t move and shoot at all, you really have to have a good board with protective terrain and solid fire lanes to get the most out of it. It becomes a big, fat target against most opponents, so a bolstered ruin is the best place you can possibly put it.
In 5th, the artillery rules allowed you to join an IC to an arty unit, and he could split fire from the arty guns. I used to attach my Master of the Forge with a conversion beamer to my TFC and techmarine gunner, and blast multiple targets at extreme range. Can’t do that any more, though. Plus it added one model with a 2+ save for random wound allocation. Thankfully, I’ve found that the TFC doesn’t really need a ride-along IC any more.

I havent even seen the artillery rules for 6th yet, to be honest. have to check them out before i field it i suppose… my cannon would deal great damage until an outflaning unit came on and ganked it. it wasn’t very durable in 5th — one glance or pen vs armor 10 did it in, if i remember right.

I like it, it’s a very clever use of bits! I would have set the rocker down between the land raiders more for a lower profile because I like the look of low slung artillery.

I had considered looking for some epic tank to use as the base for my Rebel Grot heavy weapon platforms. This post has me thinking about it again.

It would look nicer if it sat lower between the LRs, now that you mention it. good tip! hmmm… not sure i can pull them apatr without potentially breaking something tho…

Thanks fellas! it took me some thinkin’ to figure out how i wanted to make it, but the whole thing cost me less than 5 bucks i think.

I actually just found some photos on a thumb drive of the actual construction of this TFC. I may have to revisit it with another post… 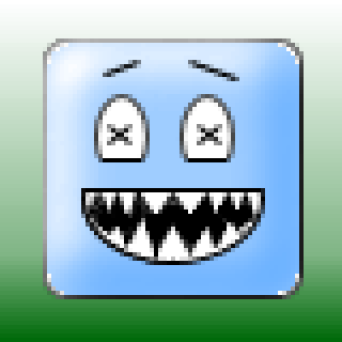