Anyone who has scratch built tanks knows that the tracks are a particular issue.  Making them individually is a mind breaking exercise in tedium.  In the past I’ve done this and find it’s a matter of finding the level of detail you’ll be happy enough with without sacrificing your sanity (most scratch-builders are skirting the edge already!)

Buying GW or third party bits can net you much better details for considerably less frustration.  I seriously considered this approach, I think I can get away with about $10 per tank which is still a bargain when you consider the total monetary investment per model.  In the end I decided to try my hand at casting my own tracks instead.

I had done some casting in the past for various terrain projects.  I had some latex mold builder left over from these projects.  From pretty much everything I’ve read, silicone is easier to work with but I figured I’d stick to what I have for now.  For casting material I’m using Amazing Casting Resin by Alumalite.

I started by cutting a few tracks from styrene sheet to get the basic shape.  I made sure that each of these fit with each of the others.  Then I made some wax molds of them, and used these molds to cast more blanks.  I wanted to have a decent number of blanks to work with.  I also did this because I wanted to see how well the wax would work as a mold material, and to get a little practice with the resin.

As I had hoped, the wax worked very well for quickly forming a mold.  They were brittle, but I think this could be mitigated by making them thicker.  They held detail well and I was able to make multiple casts from them, but I don’t think they’d hold up for long.  For a quick reproduction of relatively simple pieces it fits the bill.  I made a lot more blanks than I need, but I’m sure I’ll find a use for them later.

Once I had a handful of blanks, I glued several into an overturned base.  I used non-drying clay to sculpt some detail on them.  I figured this would save me a little green stuff and I wanted to see how it worked out.  It took detail well, and I was able to make a mold from it without damaging it.  I may use this technique again in the future.

As you can see in the picture, I made several types of track plates.  I wanted to represent two basic styles.  The first has a single raised rectangle on each plate with all of the plates being identical.  The second style has two different plates used alternately.  One has a single raised strip across it while the second has two strips.

In addition to these, I made a plate sporting the Gretchen Moon emblem and another with the Rebel Star.  From these I built a latex mold.

I’ve started casting plates from the mold and most of them are coming out well.  When I have enough of the single tracks I’ll assemble a 7-10 plate run of each basic plate and make molds from those as well.  That will allow me to cast sets of tracks similar to the ones you find in tank kits instead of assembling each set from single plates.

My vision is that each tank comes off the assembly line with tracks made entirely from one of the two basic plates plus a few of the signature plates, much like the Aquila plates you find on the Imperial vehicles.  Once they’re in the field, damaged plates will be replaced by whatever is on hand.  So I’ll build each vehicle with primarily one style of track plate, but with a few odd ones mixed in to represent field repairs.

Having used non-drying clay for the original sculpts, I’ll be able to easily remove it and sculpt a new set of tracks any time I want.  This will make it easy to add variation to the current sets, or even add a third full set while being sure it will fit with the existing tracks.

For a third set I would add some more of the blanks, so that I can start with a run of 6-8 plus a couple of single tracks on the first mold.  It’s a lot of work to set up, and for one or two tanks I would definitely recommend buying tracks instead.  But, as I expand my Rebel Grot army, I’d like to have a good number of transports and artillery, maybe even some Hellhounds, so I’ll be building quite a few Chimera hulls.  Though I won’t need quite as many Leman Russ hulls, I’ll probably make a track set for them as well. 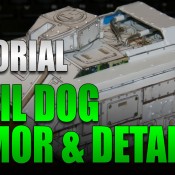 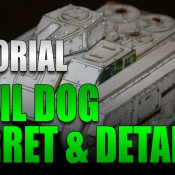 I do the same thing at times, find an excuse to try something new. Sure, there are faster, and often cheaper, alternatives but there’s no denying the fun in trying out something new just to test your skill and improve at another element in the hobby.

These are looking good. It’s going to add a ton of unique character to the army for sure.

Thanks. I’ve been happy with the results so far, I only wish I’d started playing with resin sooner! The stuff I’m using only takes about 10 minutes to cure, so once I get the 10-plate molds made I should be able to cast, clean, and mount enough tracks for a tank in a couple of hours..