Welcome to the fifth installment of my tutorial on scratch building tanks.

For those of you who haven’t read parts 1-4, I’m building Devil Dog for my counts as Imperial Guard Rebel Grots army, starting from a papercraft template created by Eli Patoroch.  If you’d like to read it from the beginning you can start here.

In the fourth installment I began to augment the paper and cardboard tank with plasticard and wire to add more details.  In this installment I will add the tracks and weapons.

Here’s where I was when I left off. 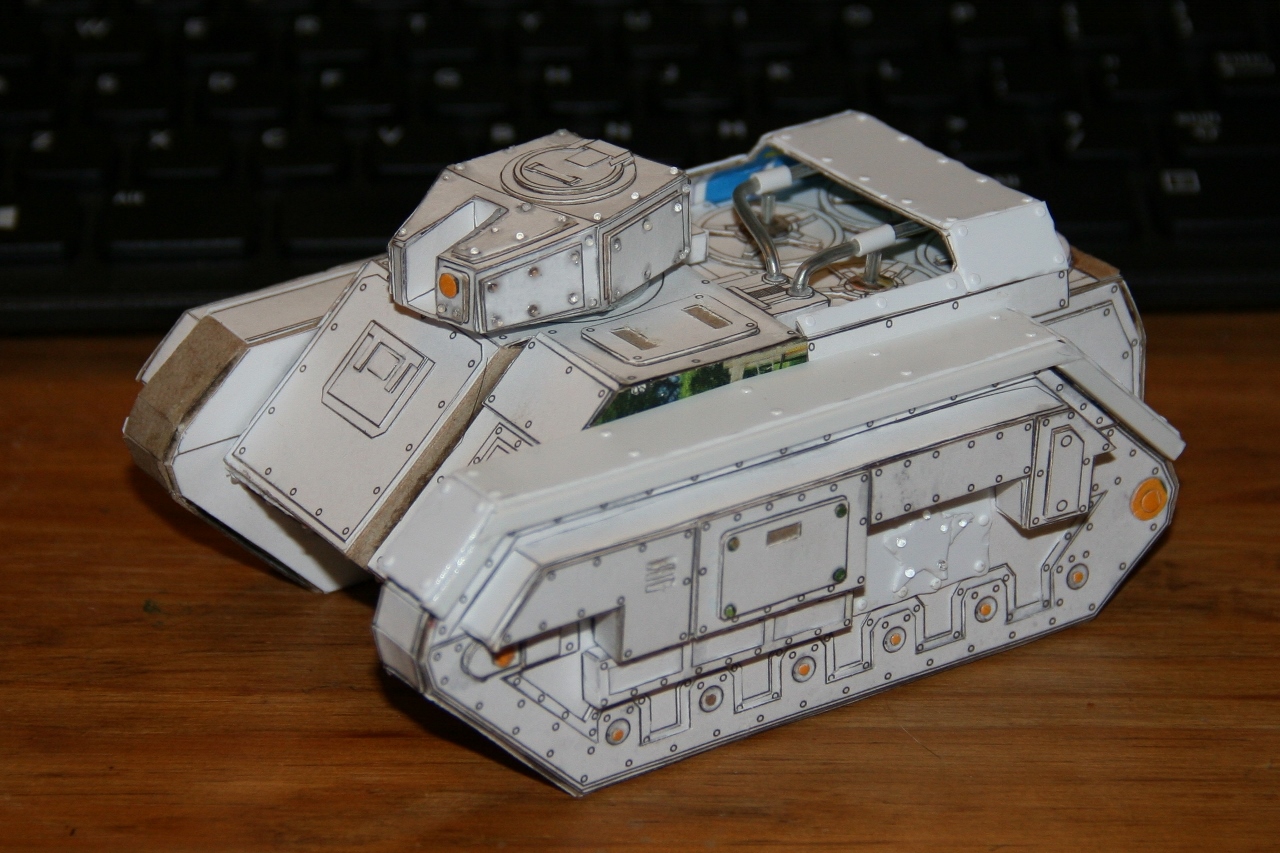 After this I finished the right side track guards, before starting work on the treads.  When it comes to the actual treads there are a number of options you can choose from.  The bottom line is that there are only two ways to get good details in a build like this: you have to put in the time or put in the money.

The easiest way to go would be to buy some tracks from a bits seller or aftermarket bits merchant.  On eBay you can find some good tracks for $10-$20 per tank.  If that’s too rich for your blood there are a couple of ways to make your own.

One option, since we’re working with a papercraft template, is to make them from cardboard.  The template includes tracks in two parts.  You can glue the template to some cereal box and cut it out as we did for much of the tank.  There are two pieces to these, a main plate and a detail plate that goes on top of it.  I made a few of these to demonstrate: As you can see they don’t look too bad.  I’ve done cardboard tracks in the past, you can see them on my battlewagon, and been reasonably satisfied with them.  They do tend to peel so you’ll want to make sure to get a good coat of something on them to hold them together.

Another option is to create a few decent looking tracks then make a mold and cast enough for your tank.  This is the route I took for my basilisk.  I posted a tutorial on that process here.

I like the way they came out, but it was a lot of work, and my success rate on casting wasn’t great.  I may try it again when I have some better supplies to work with.  For this build I decided to go with plasticard tracks.

I start by gluing the track template to a piece of .040 styrene sheet.  I recommend a glue stick for this.  It will hold the paper well enough to use as a guide but will be relatively easy to peel/scrape off when you need to. Then I use a triangular file along the edges to further define each track plate.  It sounds like a lot of work but the material is soft enough that the work goes faster than you might guess. After this process the paper is pretty ragged at the edges, so I scrape off any pieces that haven’t come off on their own. I manage to keep the second track in one piece but you can see here that the first one snapped between plates.

Then I find the tread details on the template and glue these to another piece of .040 sheet.  Again, I want the paper to come off after cutting so I use a glue stick for this.

I use scissors to cut the plates out as a strip.  Then I use an anvil cutter to cut the strips into individual plates.  These give a nice straight edge to both sides of the cut; scissors tend to twist a bit as they cut and side cutters leave one side flat and the other side beveled.  You could use a hobby knife to score and snap but I like the anvil cutters. After I cut out enough plates, I peel off any paper that hasn’t already come off.  Then I glue these onto the strip of track plates.  If you haven’t cut all the way through with the hobby saw this leaves a continuous strip of tank tracks ready to use.  It’s not a big deal if it has come out as multiple pieces; you just need to glue on more than one piece.

Before I glue them on I dry fit them to my tank.  I carefully bend at the score lines to conform the tracks to the tank.  I try not to snap the pieces off but again, it’s not the end of the world if they have to be glued on separately.

As I dry fit I start with a full track plate at the front end, and when I reach the back I need to cut one plate in half to get the correct length, so I do so.

Because I’ve used such long track guards I have two short lengths of tank tread left over that I’ll save for my bits box. Gluing on the Tracks

You can probably guess the next step, I glue the tracks on! In the pictures you can see the weapons I’ve added.  I will cover those in detail for the next installment of this tutorial.

See you next time! The tracks would be my least favorite part. You made it look easy though.

The tracks are usually the part I dread the most. I actually tried casting tracks for this build and just couldn’t get anything I was happy with. This is the first time it’s occurred to me to carve them as a strip. It took a bit of experimenting but I’m quite happy with the results and now that I figured out a process I can knock out another set in less than an hour.

This looks like tons of work. They look really nice in the end. Aren’t there aftermarket tracks out there? I thought I’ve seen folks using different profiles and such on some conversions.

Thanks, they were a bit of work but the styrene is so soft that it goes pretty quickly.

If you search eBay for “Warhammer tank treads” you’ll find some nice looking resin ones that will cost $10-$20 per tank. I’ve been seriously considering them for a while now. You can also find a lot of GW track bits and could probably do a tank for $10 or so. Personally, I recommend buying the weapons and tracks if you’d rather spend a little money and less time or if you just want more detail. But this is a scratch building tutorial so I wanted to show how to scratch build them!

It doesn’t make sense to me to go this far with the scratch build and then spend that much money on just tracks. I was thinking more like Tamiya or other military tank tread parts since that is a much larger market I assume.

I’ve looked into that as well. The it tracks for tank models are often detailed rubber bands. That style starts around $10 new. You can probably pick them up second hand somewhere but I don’t see them on eBay as often as the GW bits. Aftermarket tracks come in plastic, metal, and metal/rubber. Something in this scale runs anywhere from $10 to $60+.