In my last post I finished building my scratch built Devil Dog.  Scratch building is definitely an inexpensive and rewarding way to bulk up your motor pool, but it begs two major questions: How does it compare to the actual model, and it is really worth the time?

To answer these questions I picked up a GW Chimera kit.  In this post I hope to answer both of these questions.  I also want to see how far I can stretch the bits in a stock kit to improve the scratch built one.

I want to stretch the pieces included in the GW kit as far as I can to reduce the work needed on the scratch built tank and possibly improve it at the same time.  I will build most of the GW kit first so that I can figure out which bits are really needed and which ones are extras.

The Chimera kit comes with just enough tracks for a full set so I split them into two equal piles and set one aside for the scratch build. Assembling the hull of the Chimera is pretty straightforward, and explained well enough in the GW instructions, so I won’t spend any time on it here.

I put it together then mounted the half set of tracks, filling in the bottom surfaces but leaving the top open. 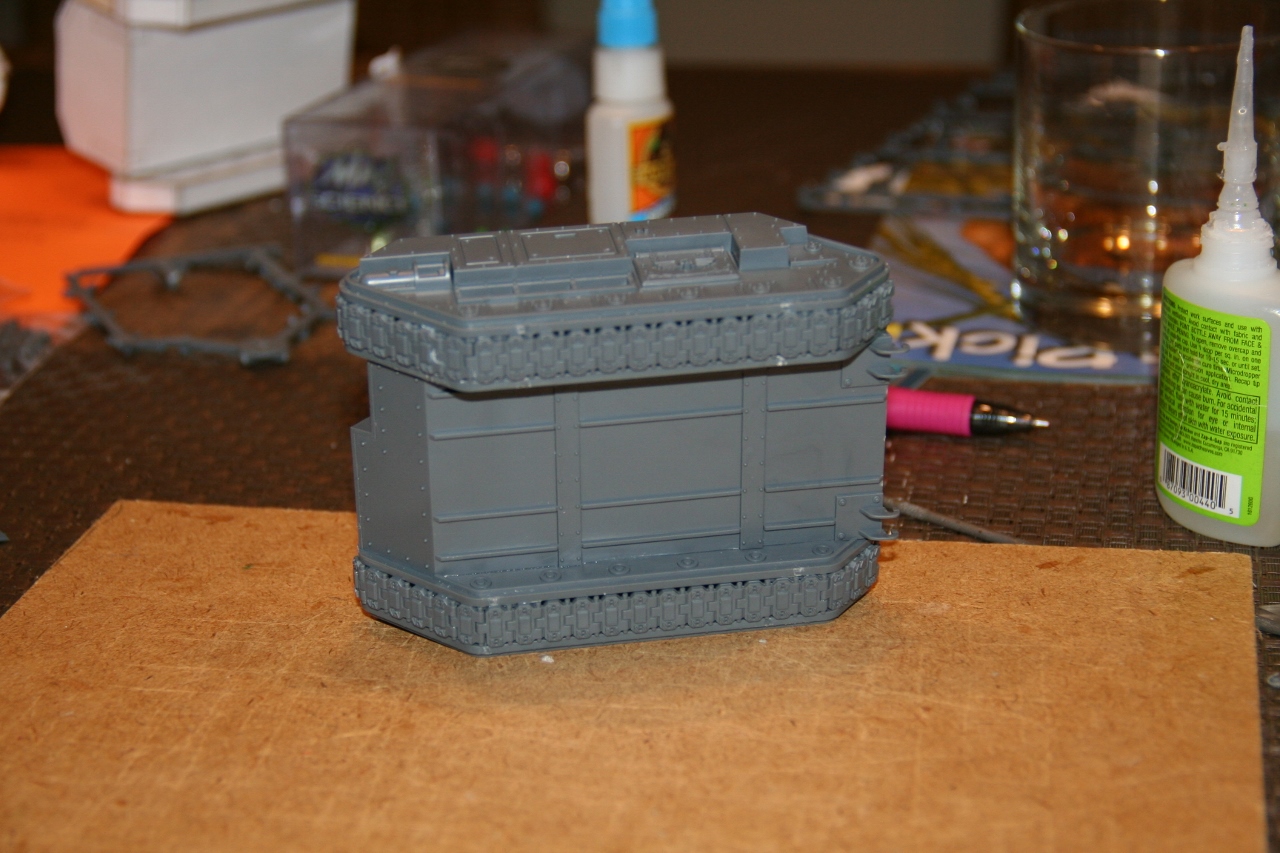 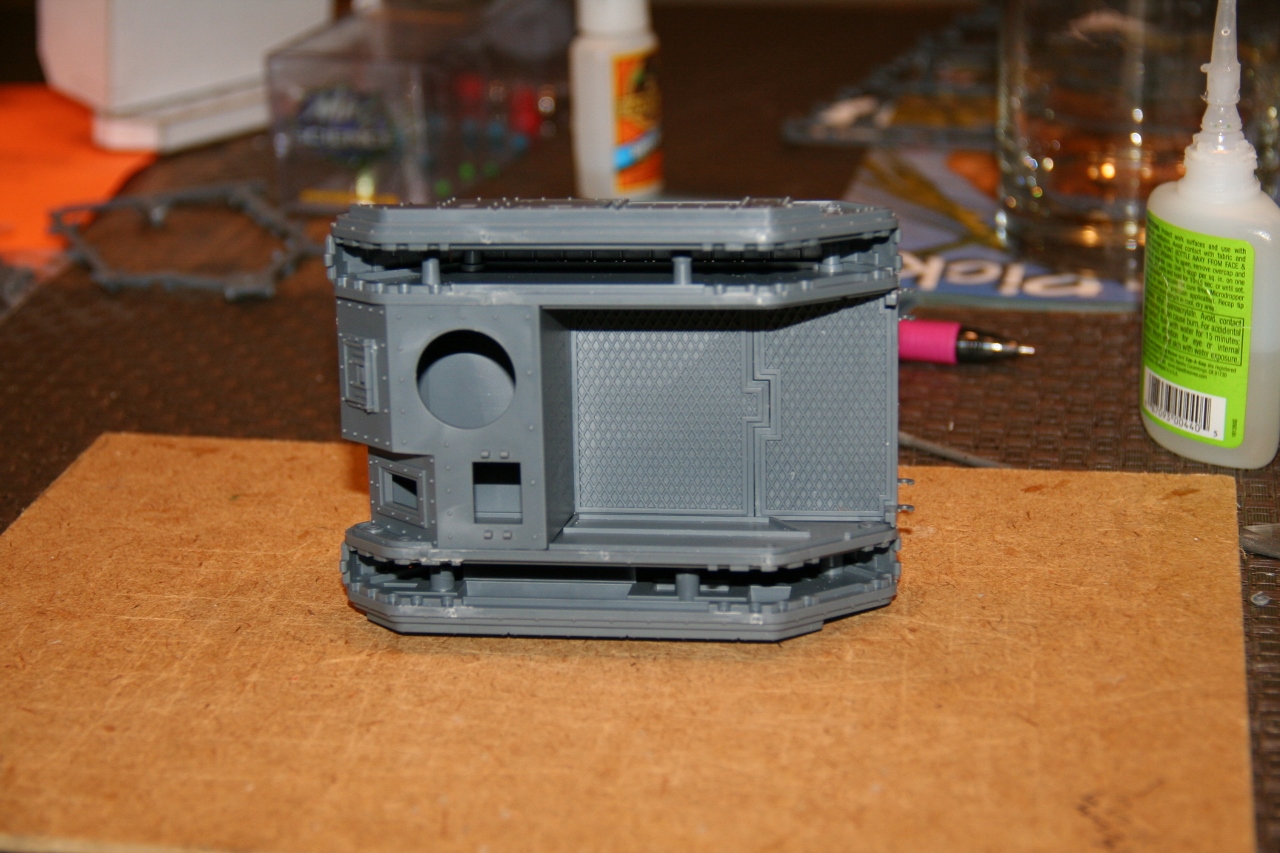 I’ve never been a huge fan of the lasguns hanging off the sides of the Chimera.  I prefer to think of the passengers firing their own weapons through some firing ports.  Instead of mounting the lasguns that came in the kit I added a piece of sytrene sheet behind the openings.  Without the guns the mounting points look like round firing points.  When I paint this tank I can paint the inside black to represent opened ports, or I could paint them to look like closed shutters. 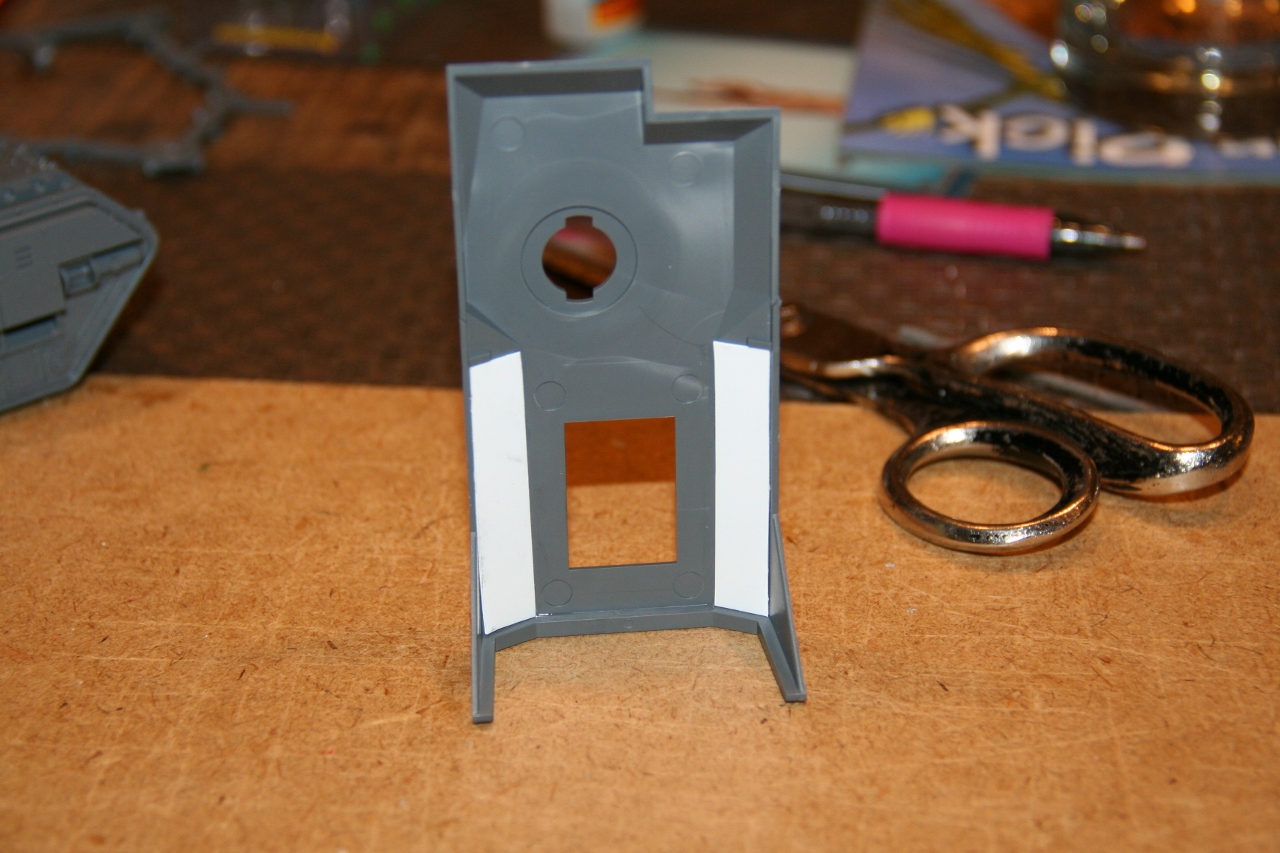 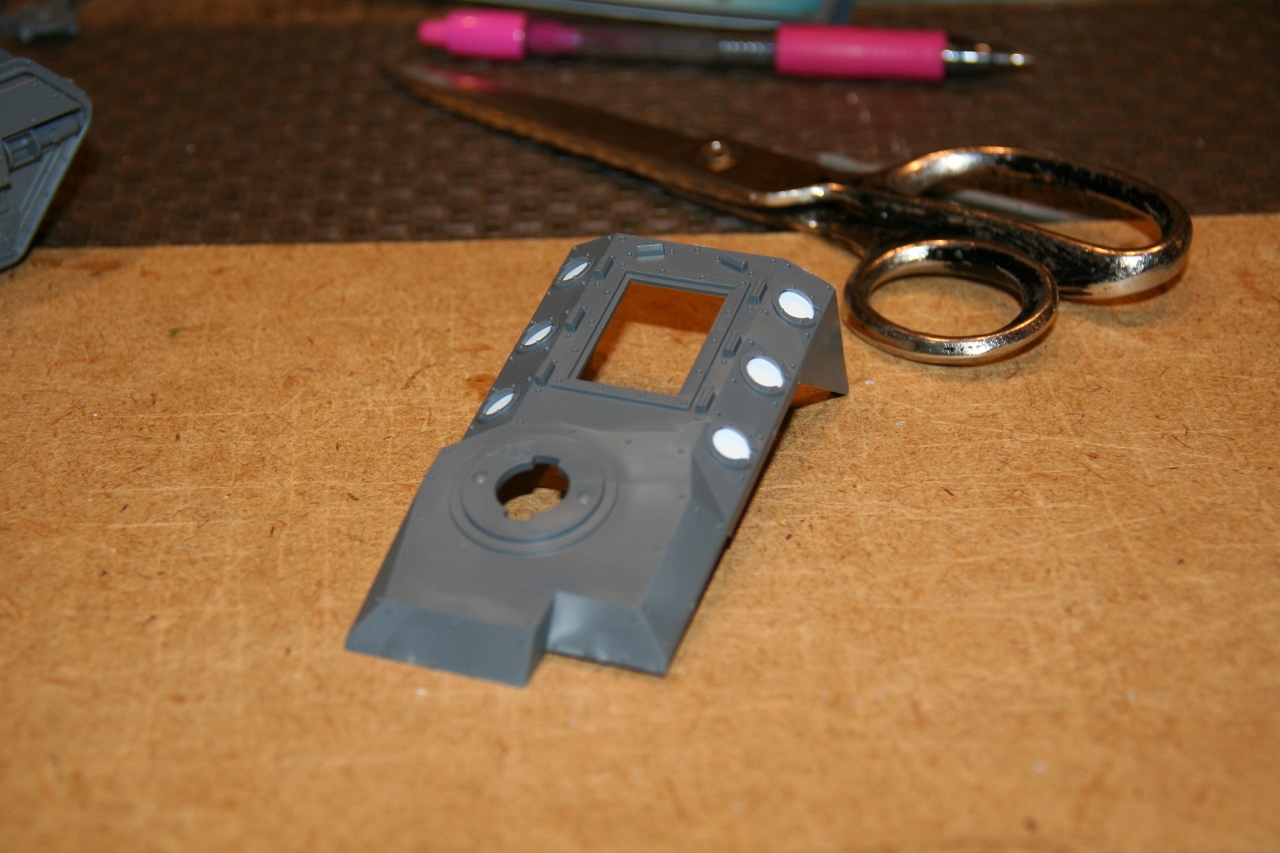 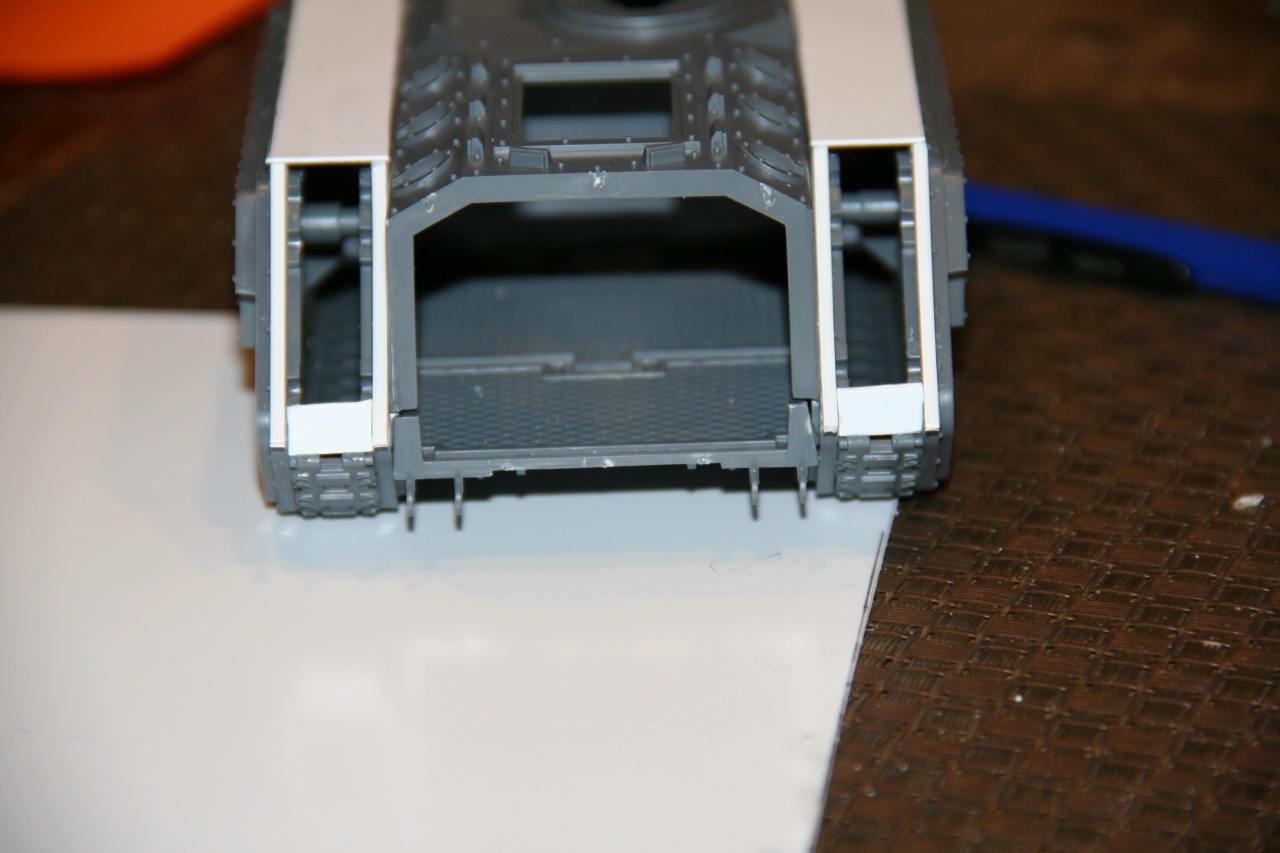 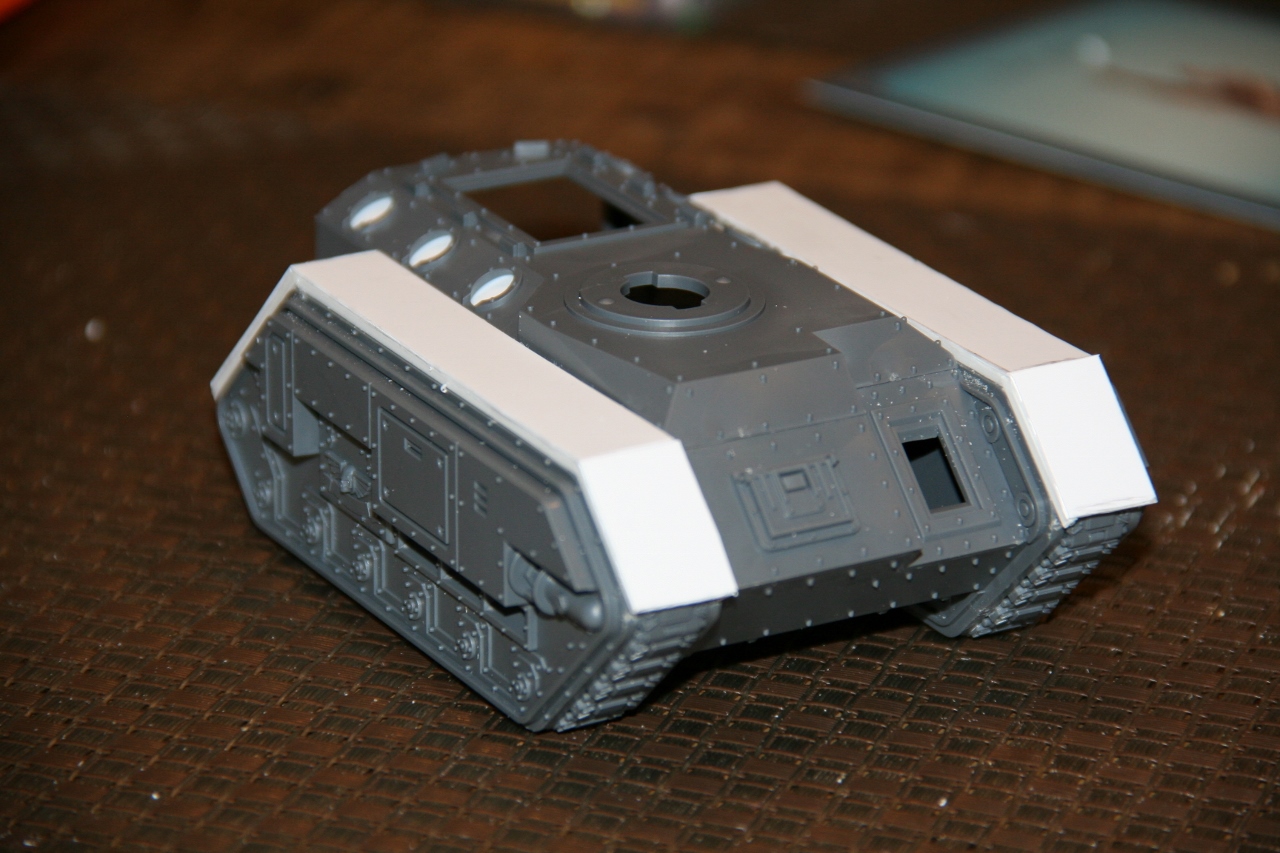 The top and rear hatches simply glue into the voids.  I recommend attaching the top hatch first because it’s easy to drop into the rear compartment, and much easier to fish back out before the rear hatch is glued on.

The kit comes with two options for the hull mounted weapon, a heavy flamer and a heavy bolter.  I want to magnet mount these to keep my options open.  I could have done this by adding a piece of styrene sheet inside the opening where the weapon mounts.  Then I could have glued a magnet to that and added one to the back side of the weapon mount.  This would have been easier than what I did, but it didn’t occur to me until I’d already glued the hull together :P

I decided to separate the weapons from their mounts and add magnets at the separation.  The hull mounted weapon comes in two halves.  Before gluing the halves together I cut the gun from the mount. The heavy bolter and mount are mostly hollow, so I filled the void with some green stuff and glued in the magnets. 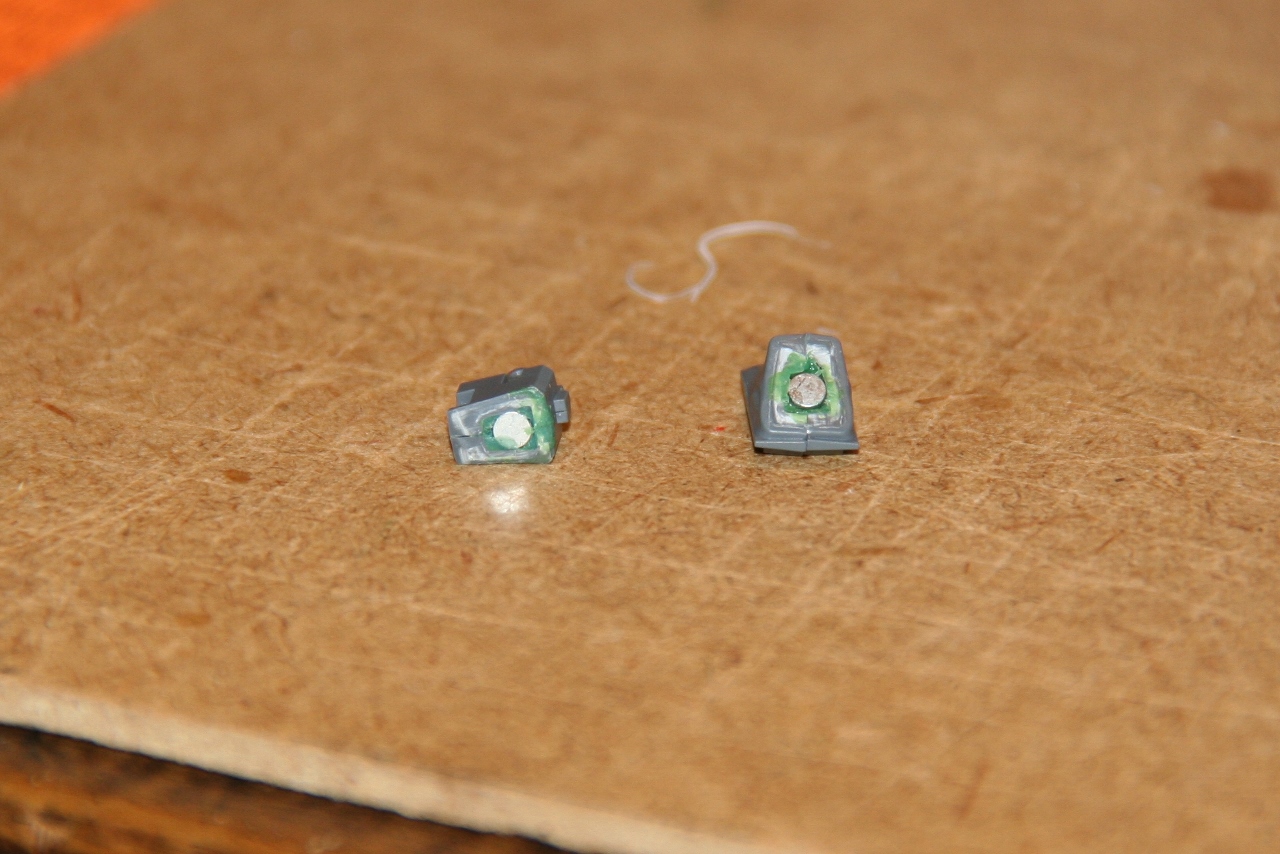 The heavy flamer and mount are solid, but so thin that it was difficult to drill into them without splitting the pieces apart again.  I bulked out the pieces with a little styrene sheet so I could make a hole to mount the magnets into. 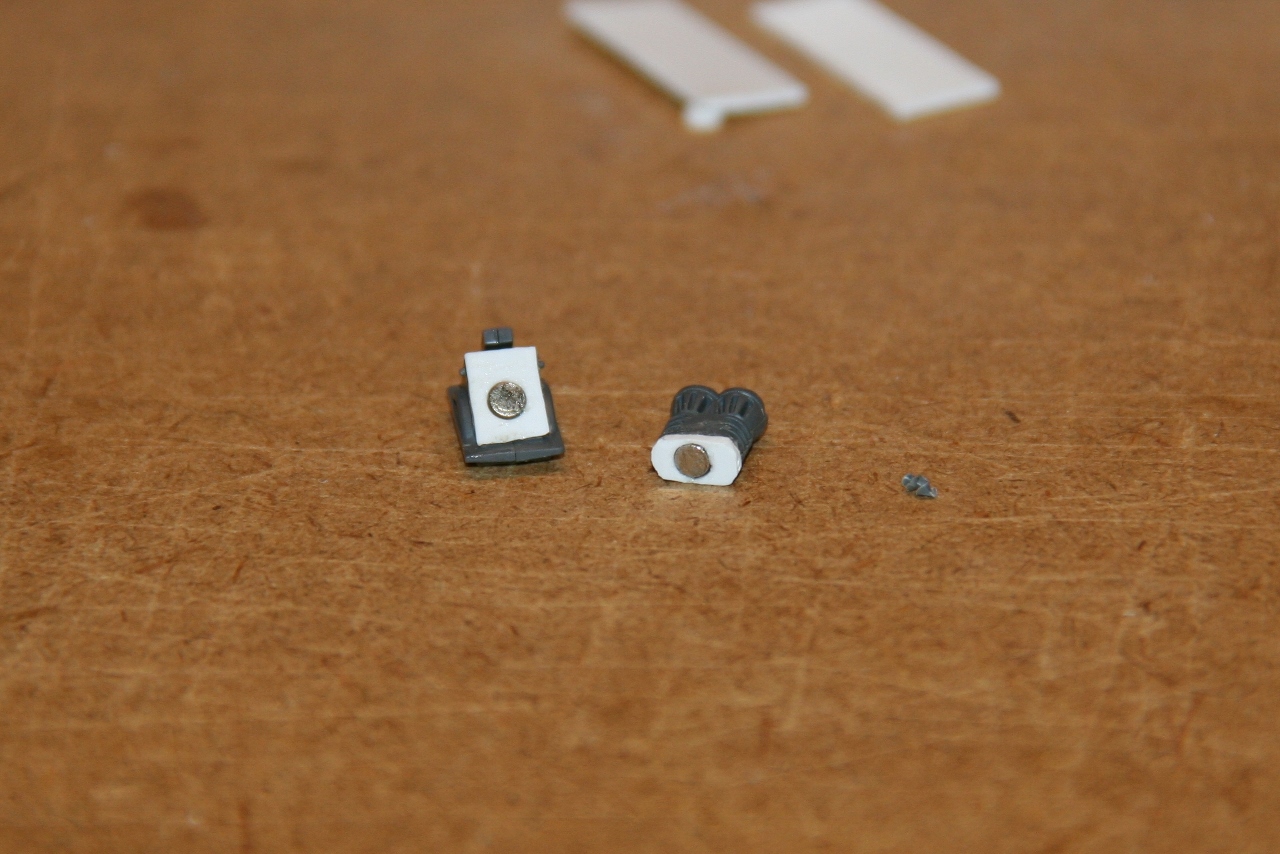 I drilled a 1/8″ diameter void and glued a magnet into the cannon mount on the turret, then added a matching void and magnet to the back side of the weapons.  I forgot to take a picture of this, I’ll try to remember to update this with a picture later on.

The turret can be assembled with the hatch closed or open with a guardsman hanging out of it.  This was an easy opportunity to add some Grot character to the tank, so I swapped the guardsman’s arms with Night Goblin arms and gave him a Goblin head.  There are still some details to be added but at this point the GW kit is mostly finished.

Comparing it to my Devil Dog reveals that my scratch builds have come out slightly larger than the official kit. This difference isn’t enough to warrant scrapping my previous builds, but I do want to correct the issue going forward.  I scaled down my copy of the Chimera template to more closely match the official model and printed out a fresh set.

Building the basic Chimera from the template is essentially the same as building the Devil Dog, so you can see my tutorial on that if you want to know how it was done.

For this one I’m using the rest of the tracks from the GW kit instead of making my own.

The GW tracks have tabs that fit into the track mounts.  Since I’m gluing them to a flat surface I had to cut all of these off. Then I glued them to the tank pretty much as I had done for the GW kit. 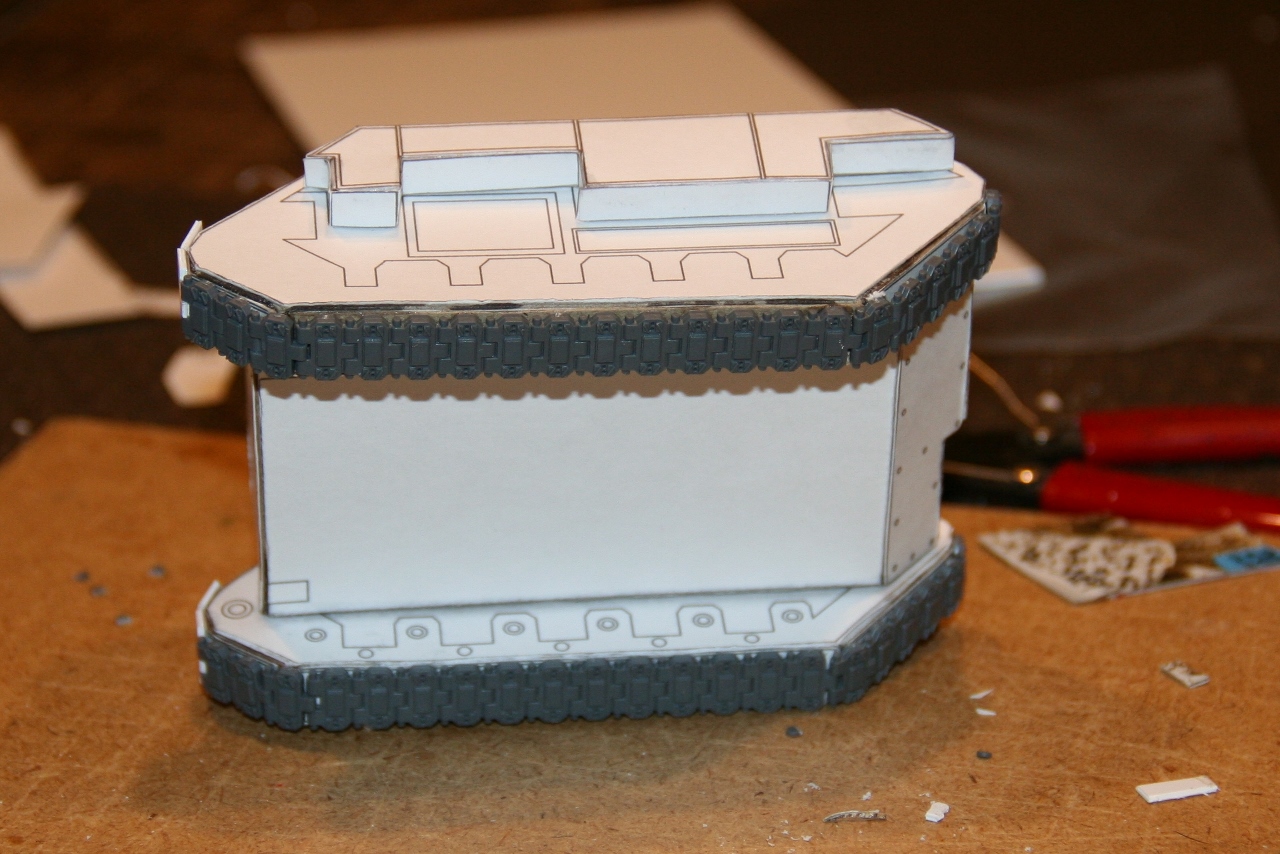 I added a couple of simple track plates at the back just as I did for the GW kit. 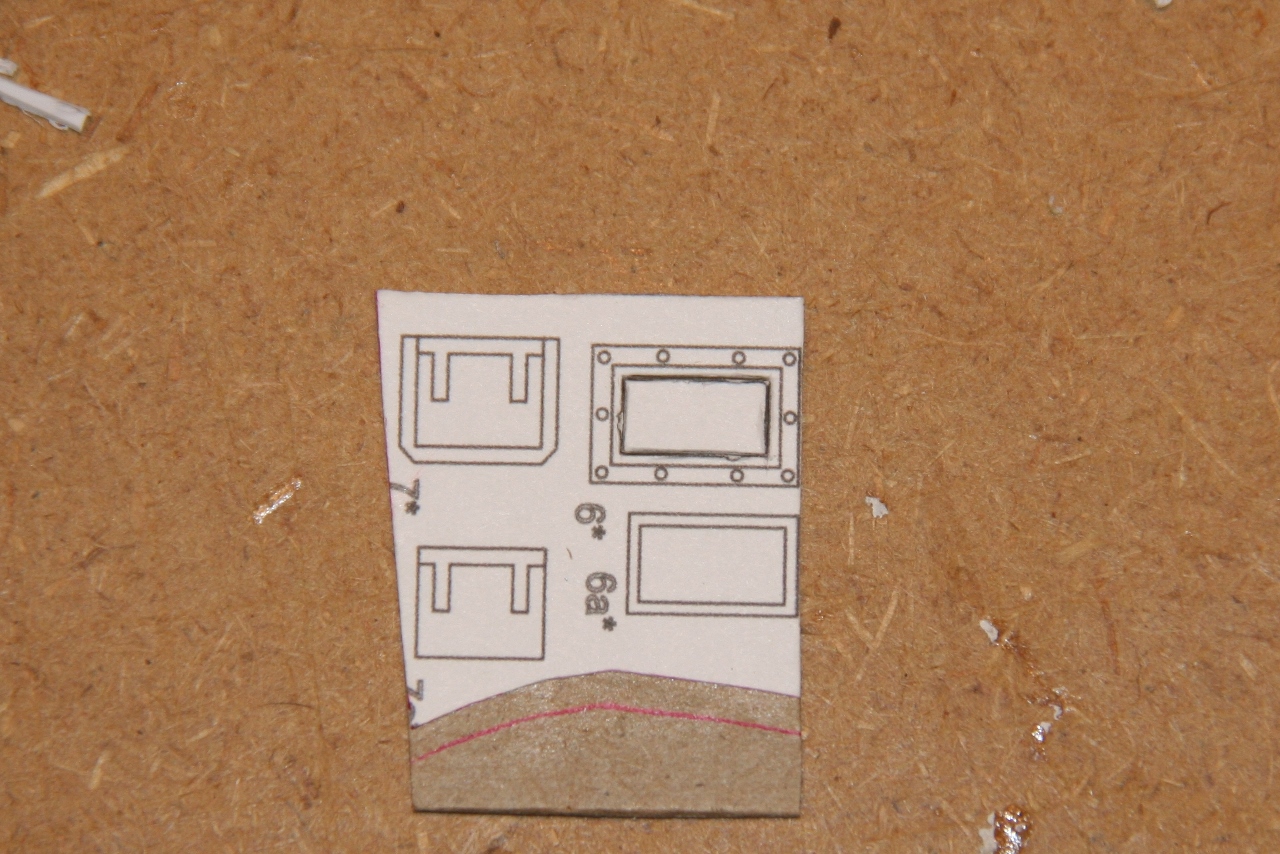 If you look closely at the picture, you’ll see I’ve already cut a window into this piece, but I left it in place while I took the picture.  The weapon mount fits into this window.  I glued this base plate, and the weapon mount, to the front of the scratch built tank to create the base for a hull mounted weapon. 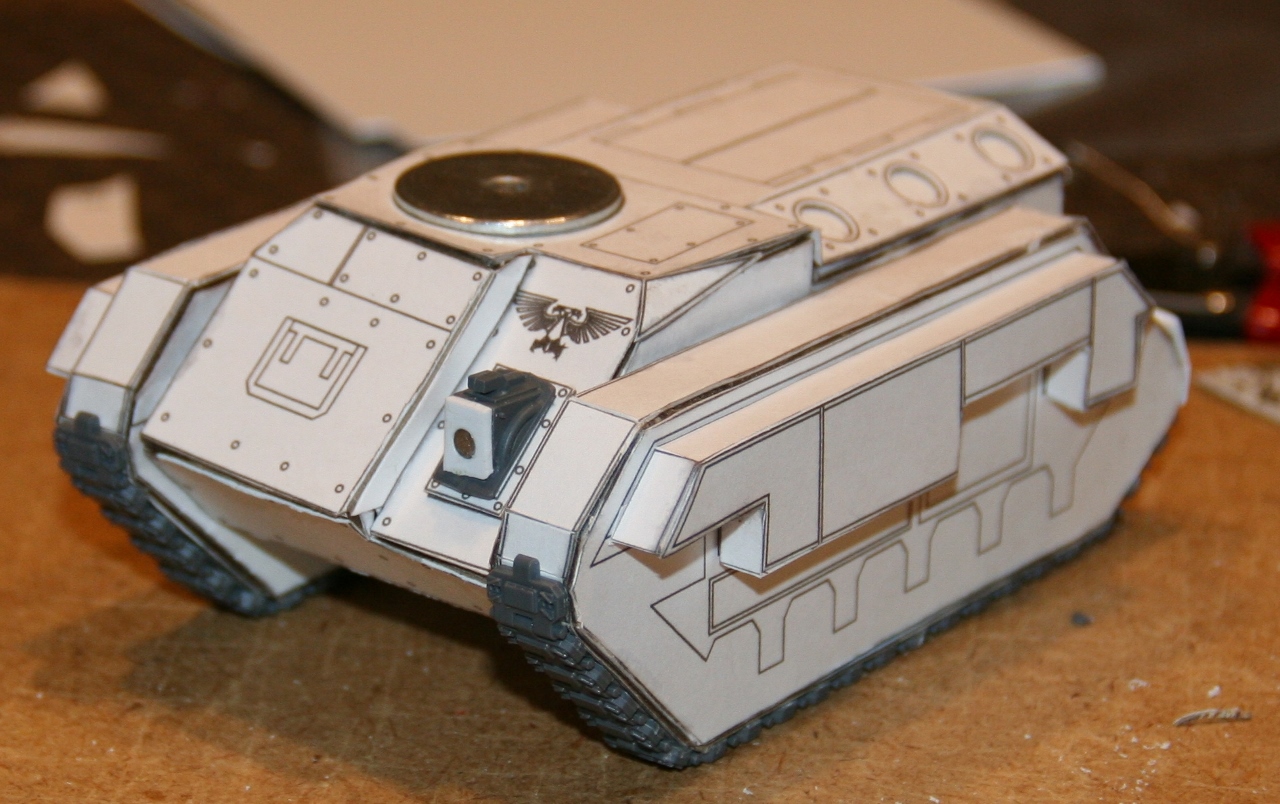 I built the turret from the template then I used styrene and green stuff to build up a mount for the turret weapon.  I started with a short piece of round tube and cut it lengthwise.  Then I filed it flat until the magnetized weapon from the GW turret would sit correctly on it, drilled a hole for the magnet, and filled the hole with green stuff to hold the magnet in place.  I put a small drop of superglue on the magnet before pushing it into the green stuff.  This left a gap between the turret and weapon shield that was larger than I liked, so I added filler plates to either side of the weapon mount, and filled in the remaining spaces with green stuff. Now the weapons I magnetized for the GW kit can be used on both of these models.

I started building the track guards for the scratch build tank using the same process I used for track guards in part 4 of the Devil Dog tutorial.  I still have quite a bit of work to do on the scratch build, and a little detail work on the GW kit, but they are both far enough along for a side by side comparison.

With the template scaled down slightly, I was able to create a scratch build with the same width and length as the GW kit and just a tad more height.  Some of the proportions are a bit different but once they’re painted very few people will notice the difference unless it’s pointed out.

The GW weapons and tracks are more detailed than the ones I’ve scratch build, and using them saved me a lot of time here.  A complete scratch build probably takes me around four times as long as the GW kit.  If you’re looking for the fastest and easiest way to build your fleet of tanks then you’ll definitely want to buy the models!  On the other hand, scratch building is definitely cheaper.  For the cost one Chimera kit I bought enough material for dozens of tanks.  If you don’t already have the tools you’re probably looking at another $40 or so, but that still gives you an army of tanks for the cost of 2.

Buying a couple of kits and stretching them, or buying some bits to augment your scratch building is a nice balance between the two.  For my next post I’ll finish the details on these two, and use up some more of the bits that came in the Chimera kit. The size difference is barely noticeable. Another great tutorial too.

Thanks.
The size difference isn’t bad but now that I have a proper reference model I’ll try to keep the chimera hulls the same size. Including the two built for this tutorial I only have three chimera built. I could convert the larger one into a second devil dog/ hellhound, then the sizes would match within vehicle type. For now I’ll just keep it as the company commander’s ride and say he opted for the larger luxury edition!