Make Do and Mend Part 3: Praetor Completed and Painted

The Praetor armoured assault missile launcher KO is now painted and ready to do some damage. 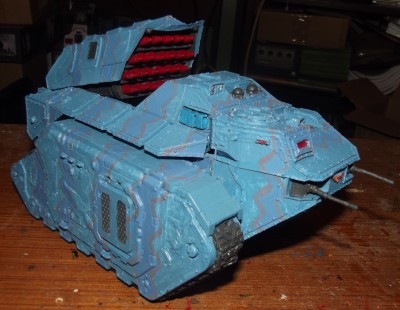 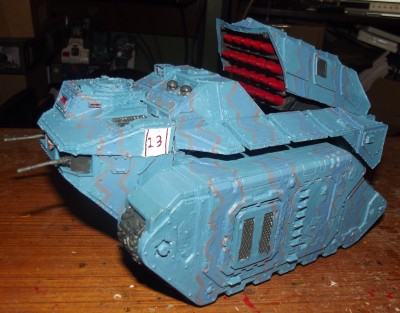 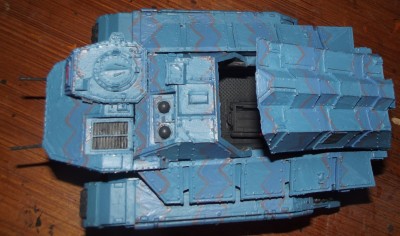 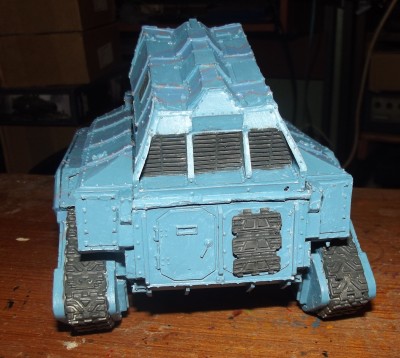 I added some rhino doors (fitted on backwards) to fill in the sponson gaps on the side of the land raider tracks, and added a radiator – as my IG colour scheme and theme is inspired by the Valkyria Chronicles video game, where the exhaust would normally sit. I did not have the exhaust component so this worked out well.

The radiator is made from the sponson slots from leman russ weapon sponsons. A spare track section was added where you would normally find the fuel tank. The fuel tank was missing, like a lot of other pieces. Here we have my version of this tank next to an official FW version. My friend added some autocannons from the heavy weapons team kit. My ‘autocannon’ barrels are a lot smaller, but match my krieg autocannon teams better.

The land raider tracks and general shoddiness of my starting point means that my Praetor is both longer, wider, and taller than a standard forgeworld kit for this model. Overall though it doesn’t look out-of-place when we compare it to the real thing.

I do still need to clean up the paint job, but its good enough for now as it is ready to blow the forces of chaos apart during our game of apocalypse. 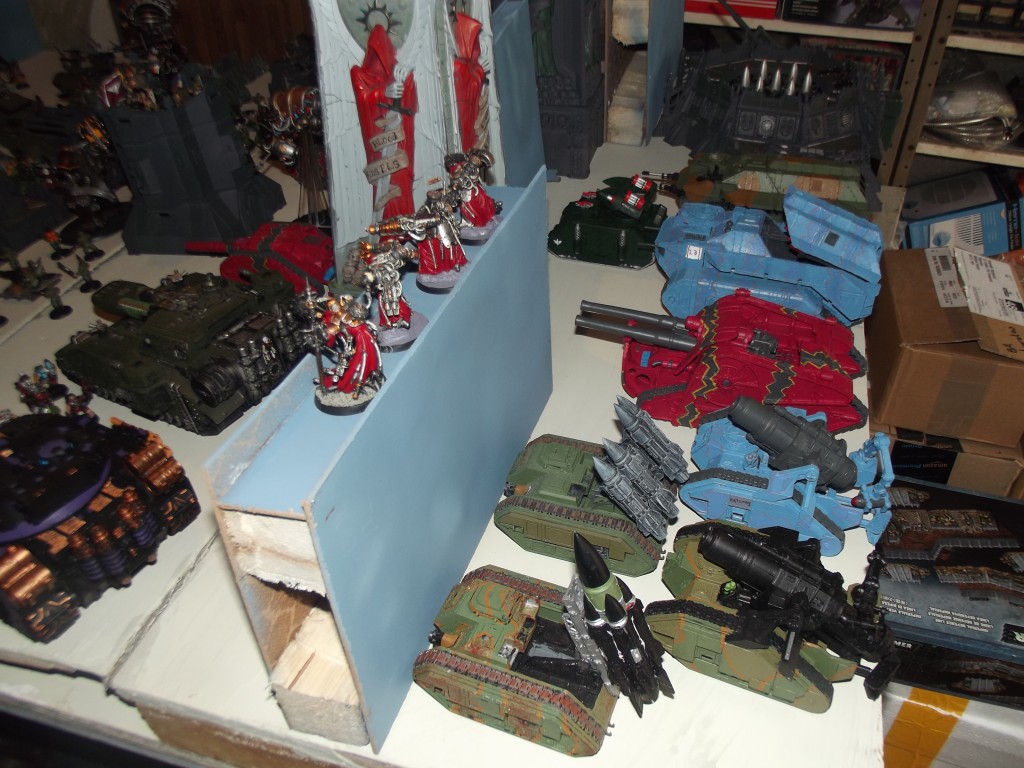 A sneak peek into the setup for our game of apocalypse. The KO Praetor has joined its official brother in the artillery portion [Manticore, deathstrike, 2 bombards, a minotaur and a scorpious whirlwind] of the army during the imperial deployment. (and I really should have put caps on the sides of the wall pieces. Oh well the benefits of hindsight)

This, like the praetor above, is a project that relied on filling in gaps with abnormal parts due to having an incomplete item as the starting point. 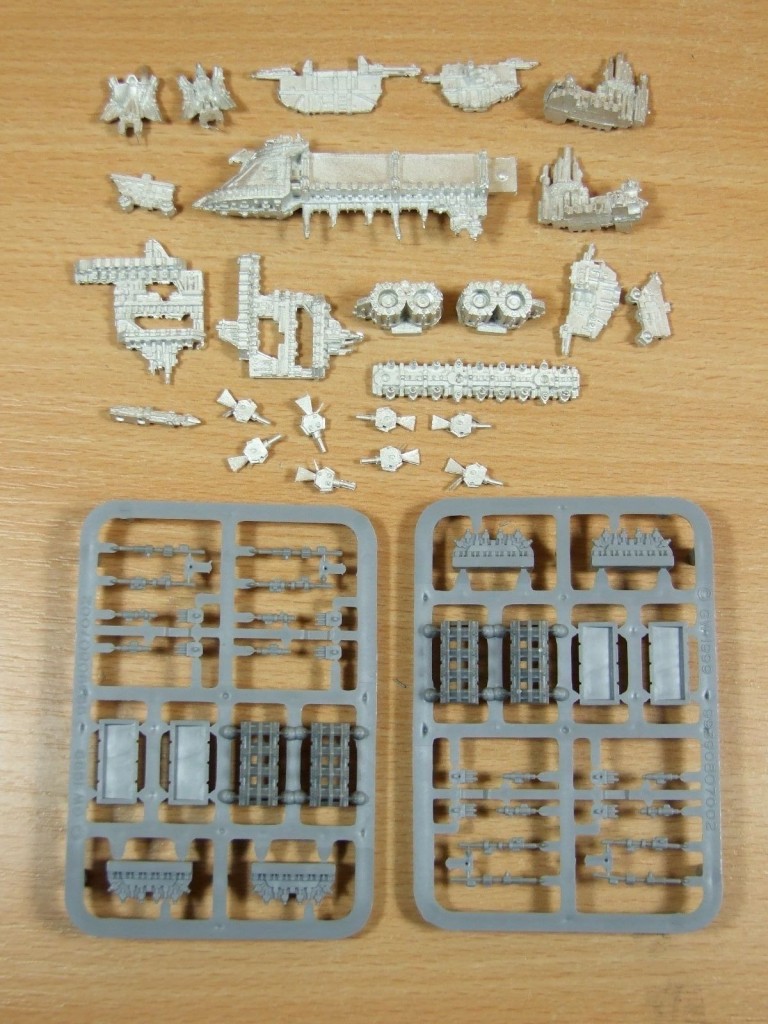 This is an incomplete retribution class battleship. The rear portion of the central hull, and the lower rear dorsal piece are missing. As we will be returning to Battlefleet Gothic as part of our campaign, I needed to create a vessel for the dark angels to make use of. Not wanting to just acquire another strike cruiser or battlebarge, I started with the incomplete retribution class battleship above and set to work on creating a unique ship for the DA to use. 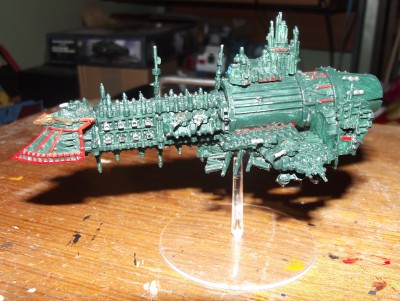 Here is the completed model.

A Valkyrie engine was sourced and fused into the hull to create the rear portion. The side armour components were repurposed as the dorsal ‘wings’, and some sensors veins were added underneath these. A flying stand mounting point was secured underneath the model to allow it to be used for battlefleet gothic.

This model was a case of having an idea, a pile of parts and just running with it. The undaunted warrior next to the  Imperatoris (Emperor class battleship). That came together well. What color is that? I like it. I also like the design you did on it. It helps break it up.

The Base colour is GW Hoeth Blue, the banding is Calgar blue and the grey line in between is slaanesh grey. (I found that without the line the two blues blend together and the difference in shade cannot be easily seen)

Those are two blues I don’t currently have. I’ll have to pick those up then.

Nice work on the Praetor, dude. Actually, it falls into that semi-frustrating category where a lot of people won’t even notice how much of it is non-standard unless the other one is next to it, or they’re very familiar with the original model.

Thanks, sometimes things just work with projects like this one. Not many people have experience with Forgeworlds Macharius family of tanks (The normal praetor uses Macharius tracks) due to the plastic Baneblade so unless I bring my macharius with me to the same game it should pass as it looks correct. Plus saving £110 always helps. (The official version is £120 and my version was £10 for the land raider parts, due to being given the starting point.)

Yeah, never going to argue with that kind of savings!