Last week I posted pics of models I painted to a low tabletop standard for the sake of the Standish Standoff.  Although I didn’t get them where I wanted them for the event this does leave me with several units that are fairly close to finished so I should be able to post a lot of finished models in the next few weeks.  I started with the Platoon Command Squad because the command squads were furthest from finished.  The picture quality isn’t fantastic; I haven’t set up a photo booth since moving so these were taken using the flash.  Maybe this week I’ll find my lights and set up for better pics.

The grenadier on the left was converted from a second edition starter box gretchin.  Now that I’ve worked out a head swap that I’m happy with I’ll be able to make good use of these for bulking out my infantry squads.  This was about as much work as adding hats or masks but being able to change the direction he’s facing adds much more variety to the model.  The middle two are goblin models with added height and IG arms, the fourth is a goblin with added height and pads. 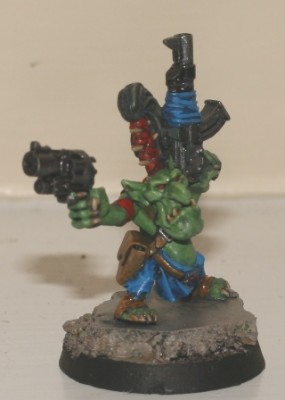 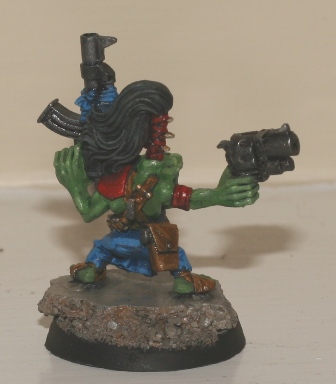 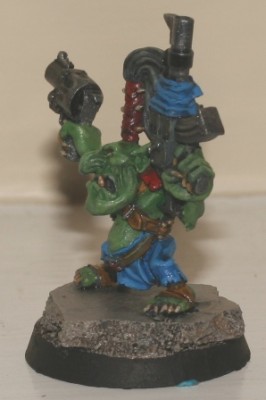 The platoon commander is the Head Honcho from the Gorkamorka Rebel Grots.  He’s one of the models that inspired me to build this army in the first place.  I haven’t done any conversion work here.  Unfortunately, the flash really skewed the blue highlights while flattening the greens.  I’ll get better pictures of these when I can.

Next on my workbench is the Company Command Squad.  There aren’t as many conversions in the squad but there’s more opportunity for interesting paint jobs. 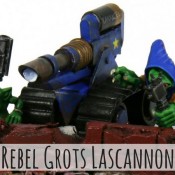 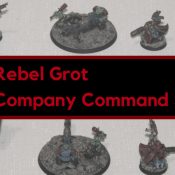 Thanks. I am hoping that blue is as lucky for grots as it is for orks ;)I like the skull back plate guy too. The goblin torsos are a bit more apish than the night goblins, which works great with the Cadian arms!

That’s a fun-looking group! My only complaint is I’d like to see a little more color. The blue and green look good, but for the command squad I’d kinda like to see them stand out, just with a few details that catch the eye, ya know? Just a suggestion.

I know I listed them as finished, but I do still need to do their squad markings. I haven’t quite decided what I’m going with yet. Since this is the platoon command for the Yellow Infantry Platoon I’m leaning toward yellow shoulder pads with black markings, or possibly a yellow stripe across the shoulder pads with black markings over that. I do want them to stand out a little bit but since they come in the same troop slot as the infantry squads I want them to fit together as well.
Anyway, if you’re looking for color I think you’ll like the Company Command Squad. As an HQ choice they will be more distinctive!