As promised in the showcase with the first squad of Bikers, here’s the second squad.

As with the first squad, these guys are just tabletop quality. There’s nothing fancy going on at all with this unit. Well, unless you count that cool lean they got going on while they zoom around. They got mad skillz, yo! 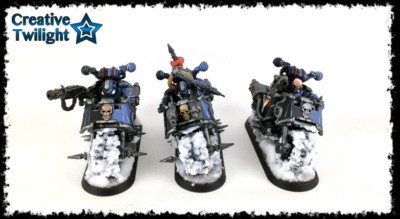 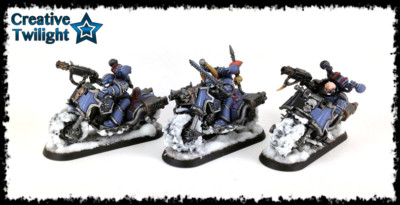 With the first squad, I also talked about how I did the snow different on the tires with this unit. Instead of using the paste I did on the first squad, I used the same technique I use for the snow on the base. I did a tutorial on it previously which covers all the fine details. In short, it’s the snow flock mixed in with Mod Podge (PVA glue & sealer), with some white paint.

The only difference in what I did on the tires, compared to the base, is omitting the last step of dipping it into the snow flock at the end. That final step creates a fluffy look, and that’s not what I wanted for tires.

The big thing I’m after with the tire snow is something realistic. Anyone who lives in a region that gets snow knows what snow on tires looks like. It packs into the tire treads, gets stuck inside the wheel hubs, and if it’s sticky/wet enough it will cling to the side of the tires.

I realize I went overboard on the tires here, but that’s because of a mistake I made in doing it. When I put the snow on there the first time, I didn’t have enough white paint in the mixture. When the snow dried it was too wet looking, too clear. I had to do a second application, making sure I had enough white paint in the mixture. I tried to keep it as thin as I could, but I also had to cover up most of the previous layer.

The snow isn’t perfect, but I can live with the final results. I learned something in the process, it doesn’t look bad, so I’ll call it a success. 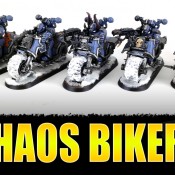 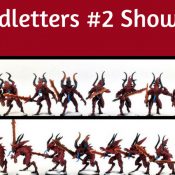 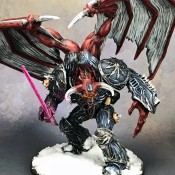 Vrooom! I’m pretty sure I would be doing just that every time I moved them on the table :-)
Looking at all that snow makes me glad to have moved away from it! It looks nice on them though

I do actually – say vroom when moving them…

Eh, I don’t mind the snow. My wife hates it though!

Joe B
Reply to  Thor

You could always pack up and move to this coast. Rarely get snow and if you want it, the mountains are close by :-)

My wife is partial to Arizona actually.

They look great. The abundant snow just looks like they hammered through a big drift or something.
Where’s their bolters?

CSM Bikers come with pistol and CCW. There’s two ways to get a special weapon. Trade in your CCW for it, or trade in the Bike’s bolters for it. I trade in the Bolters to keep the extra CC attack.

On that first squad I did, you might have noticed spikey bits on the front. Those guys I magnetized for bolters. However, in as long as I’ve been using them, I always trade in the bolters for the special. So, figured why hassle with this squad?

I never knew that. Interesting.

On mine I usually actually mount the Special Weapon on the bike, and put a headlight or a skull or something where the other Bolter would be.

As with so many of GW’s odd options, this one is driven by OOP Models. For a long time, the CSM Biker box came with Melta and Plasma bits that replaced the Bolters, and even tho they don’t do them that way anymore, they’ve left the option in for those of us who still have those.

I’d love to see proper weapons to mount on the Bikes. The one-handed shooting is a bit silly.

Yeah, I wish they’d bring that back, Model-wise.

I like the snow on tires. It looks pretty realistic to me, like really heavy, thick snow.

That’s definitely the idea, a thick wet snow that just clings to stuff.

Awesome job all the same Thor.

Looking good dude, you are building up quite the force :)

The army grows slowly. It would grow quicker if I didn’t intentionally try to avoid backlogging myself on hobby projects.

Part of me wants to remove a bit of snow directly from the wheels…but then I looked up how it packs on the wheels and it would pretty much be everywhere, so nice job Thor! If you do another squad of this, you should have a guy with a flamer melting the snow in front of him! haha

As someone who drives through snow for a solid four months a year, I know what it looks like, but the trick is always making it convincing on the model. That’s always the hard part, translation from mind to miniature.

I’ve thought about doing something, sometime, on some model, with melting snow. A flamer with a sculpted flame melting snow would be neat ;)

Can have all sorts of fun…any energy weapon would also work!

True enough. The task I think is doing it so it makes sense. Just flaming snow, or shooting a plasma gun at snow, is silly. I need to work out the basis for it…

Have a necron popping out of the ground :)

I was thinking along those lines, a mini-diorama of sorts :)

Reply
previousHow to Make a Tutorial for Hobbyists and Wargamers
nextWhat Are the Pros & Cons of Being a Multi-gamer?