I wanted to start this series off with my favorite unit from the current Chaos codex, Spawn. Rare is the day when I build a list that does not use Spawn. For what they can accomplish they are very cheap and their price is low enough that if you lose them it’s not a big deal either.

Spawn are beasts and move 12″ a turn. They also ignore terrain when charging, no -2″ penalty, and as beasts they automatically pass dangerous terrain tests. To top it off they have fleet, so this is a very fast unit that can get where you want them in short order, which is good because you want them in combat.

What you do with upgrades depends on how the unit is being used. I feel there’s only one upgrade worth looking at and that’s Mark of Nurgle. Mark of Nurgle makes Spawn T6. The benefit of a 3-wound model that’s T6, even without a save, should be obvious.

Mark of Khorne on them, if they are on their own, isn’t a terrible choice – it’s the cheapest mark, but you only gain counter-attack by it. I don’t think getting one more attack if charged is worth it when you could instead take Mark of Nurgle to get T6. At T6 your standard ranged weapons and melee attacks need 6’s to wound. This is a huge offset to having no save.

Mark of Tzeentch gets the unit a 6++ (invulnerable), but for the cost it’s just not worth it. Mark of Slaanesh puts the unit to I4 (not bad), but considering you will often be charging into terrain with Spawn, and suffering the initiative penalty, it’s a situational choice. Mark of Nurgle is useful all the time, unlike the other marks.

Can you tell I like Mark of Nurgle on these guys? 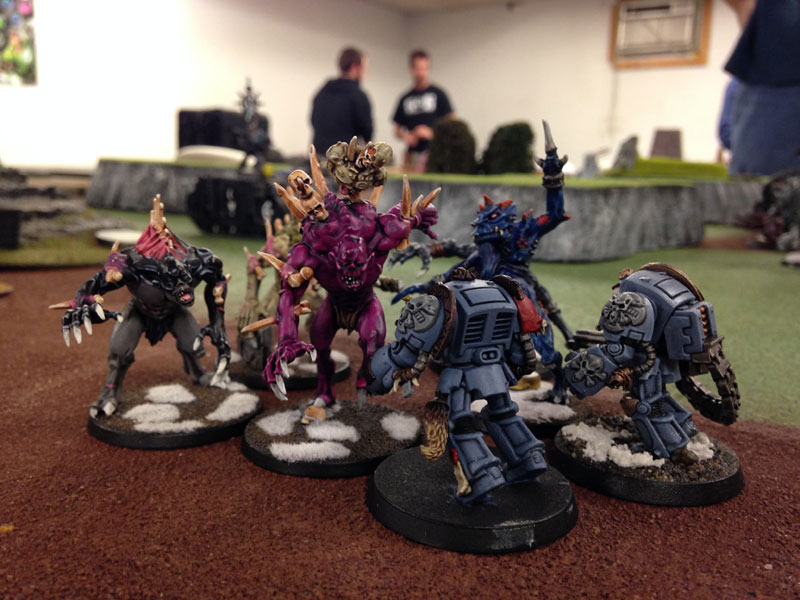 Use on the Battlefield

Spawn are a very straight forward unit to use: get them into combat. Really, just find a unit you either want to bog down for the entire game and charge it or go find weaker units to pick on and wipe them. It’s a unit you don’t need to babysit and can just unleash.

When I have them with Mark of Nurgle I will use them to tie down dangerous close combat units or units I just don’t want shooting at me, like the Riptide or Wraith Knight. You just have to be careful to avoid units with the Force rule or Instant Death rule in general. Even just a single Psyker with a force staff is a threat to Spawn.

Spawn have the potential to get 8 attacks on the charge (D6 + rage), and are S5. If you’re running a full squad of 5, which I recommend, then you can get yourself 40 S5 attacks on the charge. One thing they tend to do well is pile up wounds on a unit. They lack a way to get through armor but often volume of attacks will overcome this. Do not rely on the volume of attacks though because they are D6 attacks and you can have a string of bad luck and roll 1’s non-stop; I know I do.

With their speed and potential to throw a ton of attacks, they are great at removing small units that hide in the backfield like Devastator Squads and artillery units. You just have to make sure you plan your approach to get as much cover as you can. Not having an armor save means relying completely on cover to save you from shooting so make sure you use it.

Lastly, as I mentioned, I like to run my Chaos Lord on a Juggernaut with them and I use the Spawn as a bodyguard; a role they serve in very well. Even unmarked at T5 they are still a tough unit to deal with and what they lack in defense is usually made up for by the Lord they are guarding.

One of the great things about a Spawn unit is when it comes to modeling you can do whatever you want really. I like the Games Workshop kit for them, but it’s a bit pricey at $41 for two models. You get a ton of bits though, and could easily make more of them with some spare bodies of whatever you have lying around. There are plenty of choices for Chaos Spawn alternatives though. My Spawn are the Vargheists/Crypt Horrors unit from Warhammer, Vampire Counts. It’s $47 but gets you three models and as Crypt Horrors they fit the part well.

Of course you can just create whatever you want as well for an alternative. Take a Marine and add a bunch of appendages to him, throw on a little green stuff and call it a Spawn. You can really get away doing a unit of Spawn very cheap.

Spawn are currently on a 50mm base since 7th edition, if you’re wondering for any conversions/alternate models. Previously though, Spawn were on a 40mm base, which is the size I used above since it was the size at the time.

If you’re new to Chaos Space Marines and looking to fill in some units then definitely consider Spawn. Cheap, effective, easy to model and will almost always impress you on the table.

Are you a fan of Spawn? How do you like to run them?

Chaos Spawn are cheap, yet effective at what they do, though sometimes unreliable due to the randomness of the unit. Still, it’s a solid unit.

i use a unit of warhammer ogres (cheap, brutal looking, and you get lots for your money), converted up to look like gribbly, mutated chaos servitors (used spare cultist heads and such… gives them that bloated pin head look.). put them on the right bases, done :D

I’ve looked at Orgres but I wasn’t sure if they would be too big since I have not seen them in person to get a real size comparison. They would make a great base to convert from for sure though. I’ll have to check them out again since I need a second unit of Spawn anyway.

i got mine GW approved at warhammer world, for a tournament so they are fine :) heres a pic ( i based this lot on Bane :p )

Nice unit review. Under modelling you should include a picture of your spawn.

I was looking and realized I never got a unit shot and the few shots I have are PIP ones of single models. At some point I need to get a bigger light box setup and go back and do group shots for stuff like this.

just a couple of other uses I’ve found. Firstly fill up any spare FA slots in the force org with lone MoN spawn, they are great at scoring linebreaker or running around to get Maelstrom objectives, can act as speedbumps and generally be annoying, even if all they do is take a turn of shooting from a Devastator Squad. They’ve won me the game several times.

Units of 4 or 5 I’ve found make hilarious Centurion hunters as the Centurion’s grav weapons do nothing and their lascannons and missiles just strip off the odd wound. Since Centurions have quite short range weapons they are often deployed quite far forward. When the spawn are barrelling down on the Centurions its few players who have the sense to direct their fire elsewhere. They’ll probably tie up the Centurions, which are worth at least twice their points, for the rest of the game.

Lastly sticking them in front of tanks to give the tank a cover save is sometimes useful, I like to stick a couple in front of each Vindicator and run/flat out them all forwards the first turn.

Good idea on the single Spawn; never thought of that.

I’ve thrown mine at Centurions before. I don’t recall the outcome but do recall they were tied up for a very long time, which worked just fine for me.

My mate Liam from http://bluewarpstudios.blogspot.co.uk/2014/01/nurgle-chaos-spawn-conversion-pt-2.html made his from Milliput and numerous spikes. Also Warhammer World approved ;) when he beat me in the March Throne of Skulls, he also took most of the painting competitions and best Chaos Marine player [reiterating your opinion of the unit] but I took home best painted army for which he is stil smarting ;)

Those Spawn are nicely done. Simple but they look great.

Grats on the best painted army.

” charging into terrain with Spawn, and suffering the initiative penalty” – Beasts are not slowed by difficult terrain…

They do not take the -2″ penalty, however, their initiative remains at 1. In the Charging Through Difficult Terrain section, “if at least one model in the charging unit moved through difficult terrain as part of its charge move, all the units models just attack at Initiative step 1, regardless of other initiative modifiers, even if the charging unit is not slowed by difficult terrain.”

I love spawn. They get better when improved by magic. Invisibility is obvious and great,as is shrouding. Hammerhand is a surprise winner, S7 is much more scary to some units. Forewarning is also fantastic (and the only reason to take a mark of tzeentch.)

I guess a big threat thats just appeared is grey knights. with all their force weapons, including shooting force weapons, multiple wound models with no armour will take punishment.

A resurgence of Grey Knights will not be welcomed to Spawn for sure. Definitely one of the rare situations where Spawn are going to fall short.