The painting process begins. I intend to try to imitate and corrupt the colour scheme used by one of my gaming groups armies. The main dreadnought will be painted like his black templars only rusted and corrupted to serve a darker purpose. 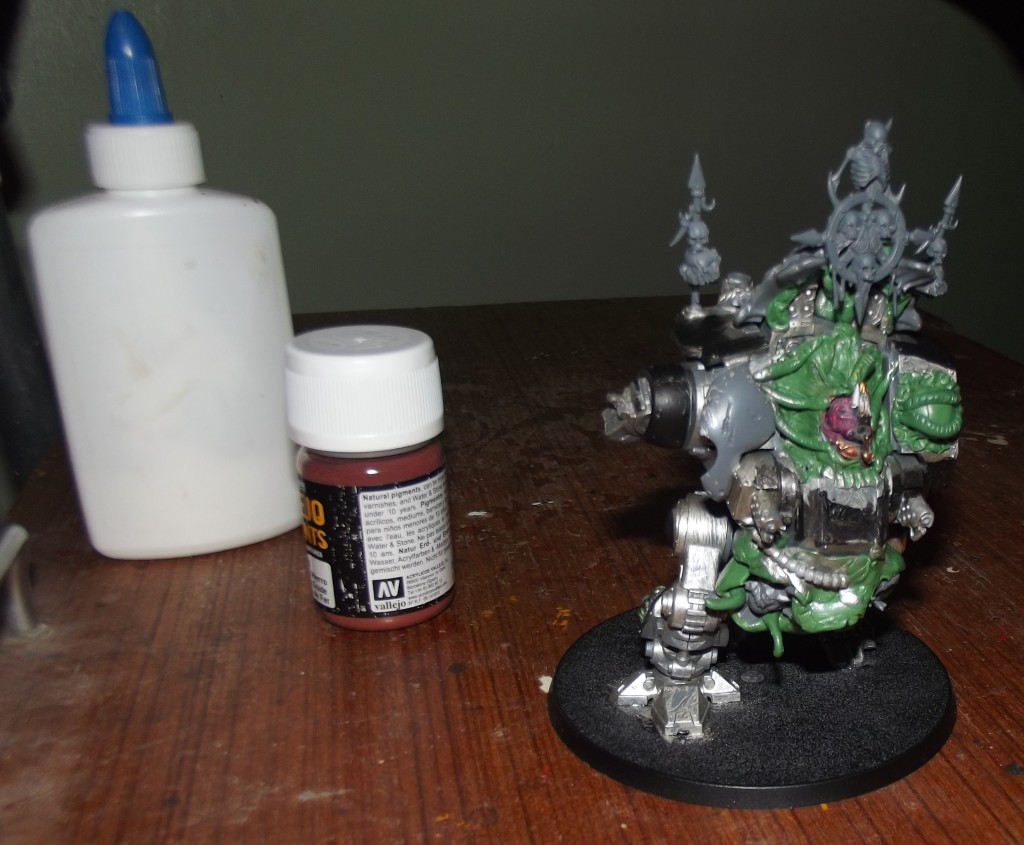 Time to experiment with weathering powders. 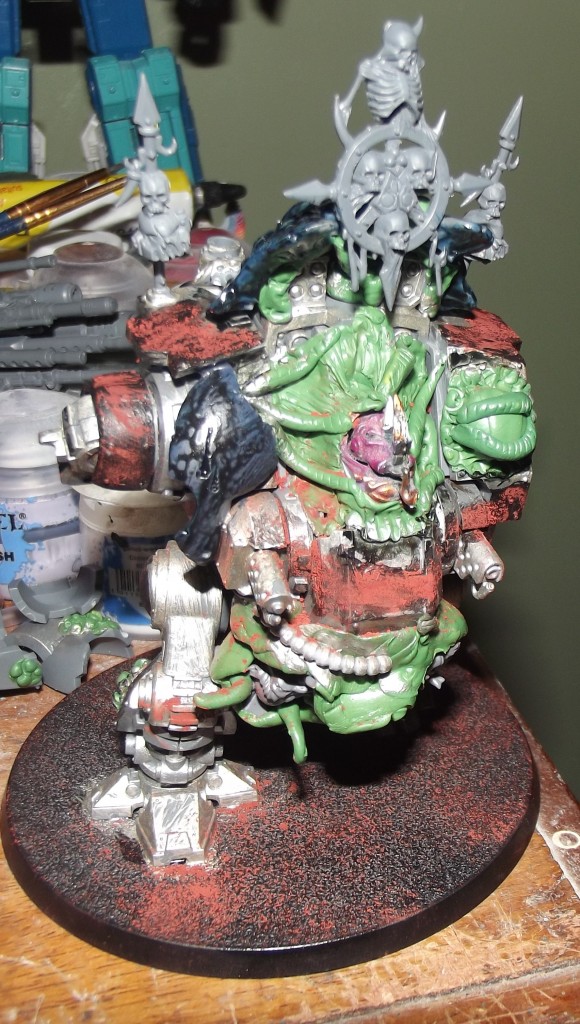 Not bad for a first pass. I kinda like the way this looks. 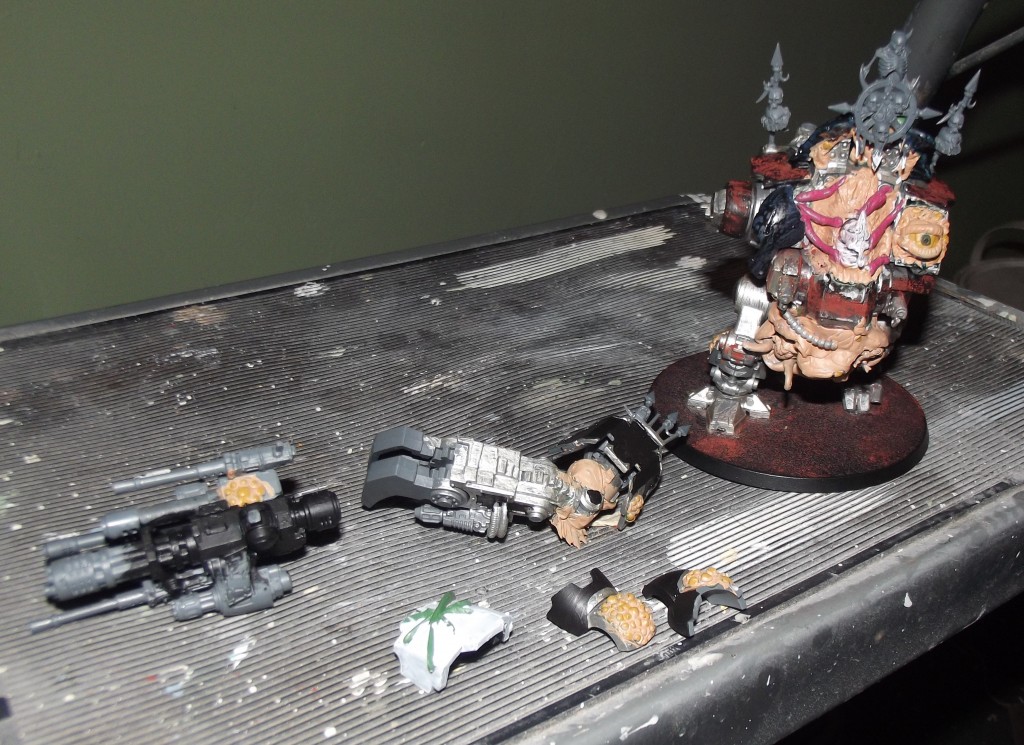 Painting the first coat on the fleshy parts. 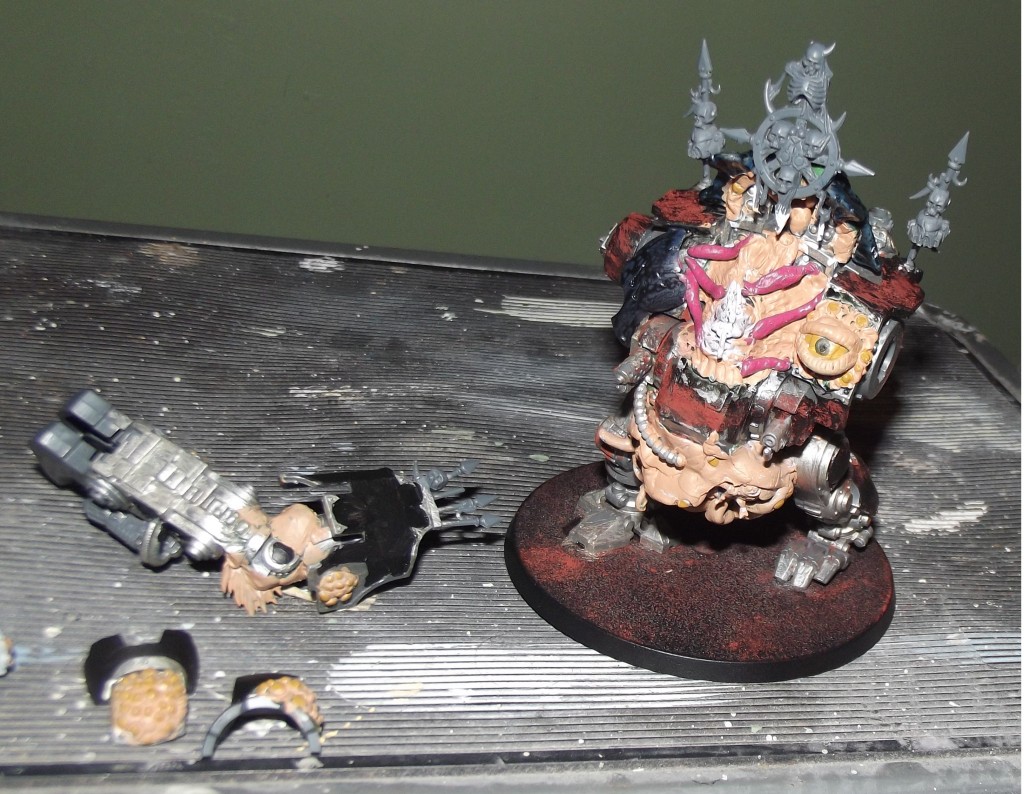 I have painted the ‘eye’ mutation and had a go at the beetle carapace pieces. 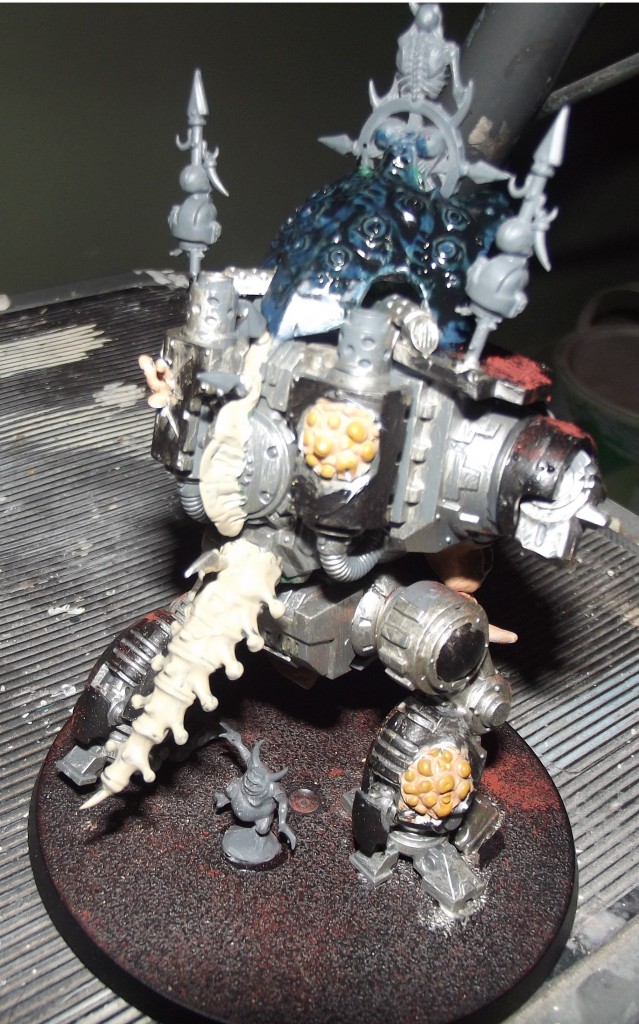 The spine has been basecoated. The extra pieces currently in progress. 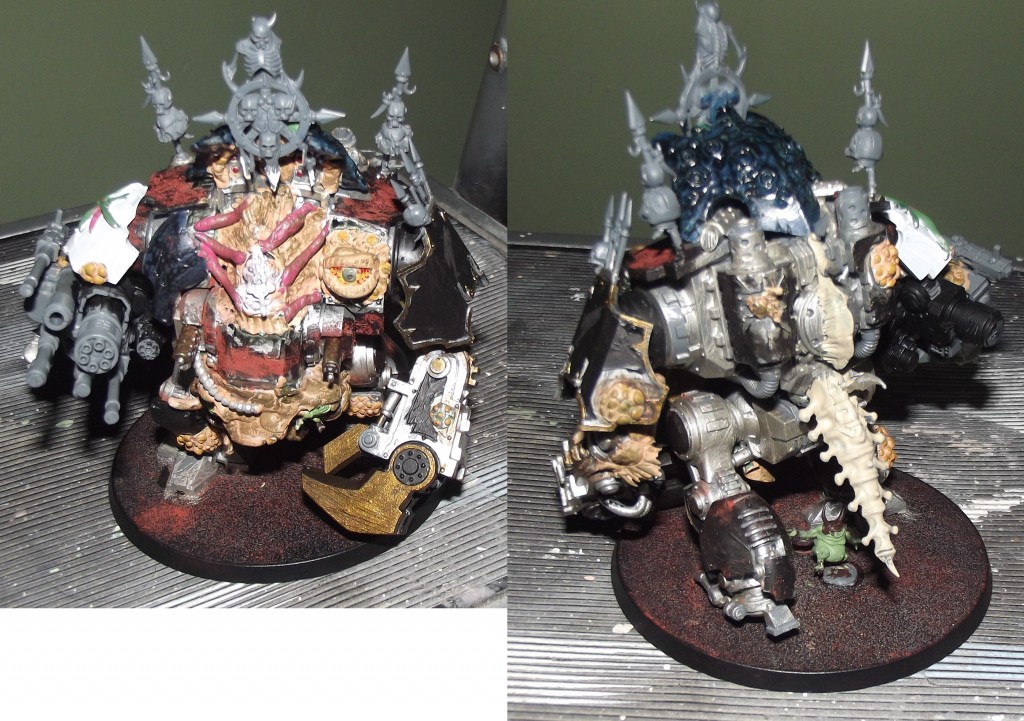 I have drybrushed the fleshy parts with lustrian undergrowth.

From here I needed to finish off the butcher cannon array, the white shoulder pad and victim. Washing and weathering could then begin. I was however out of black paint and it took a full week before I could get more. (Through a combination of work hours and not being able to get to my local game store.) I did manage to get some and could then proceed. [Albeit on the 30th of October. Painting spree commence] 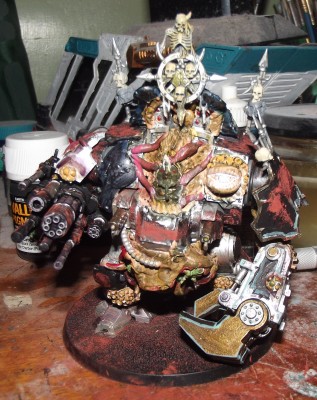 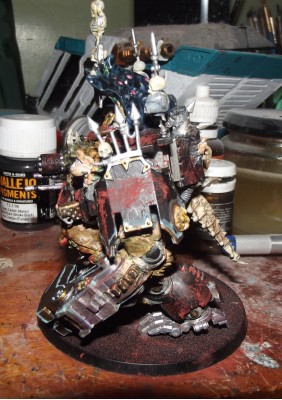 Brother Grod with the washes and weathering powers applied. The nurglings busting forth from the ‘hive’ I added some blood, offal and then attacked it with washes. The nurgling on the base has suffered from a offal shower. I added some Black weathering powder to the exhaust ports of the dreadnought. (these may need a second pass but look Ok from normal tabletop distance.) The victim is slowly being eaten by the daemonic flesh growing on the dreadnought. (Note I have washed the eye with white giving it a cataract effect. The camera hasn’t picked it up very well but it looks great in person.) Brother Grod with his nurgle brethren.

I am happy with the progress I have made but there are a few small adjustments to make to the model before I would deem it fully completed. I want to drybrush a small amount of ryza rust over the rust patches to pick out the extreme raised points, cover the beetle carapace pieces and flesh with gloss varnish and possibly have another pass over the exhausts with silver and the carbon smoke weathering pigment.

Then I need to get the base sorted out (When I figure out how I want to do the bases on my other nurgle troops I will give the dreadnought a suitable tie in base to them). The space marine helmets will remain unpainted, until the dreadnought kills some space marines in games (I will then copy the colours onto the trophies).

Not bad progress considering I lost a week due to lack of paint. I have to ask, do you not prime your models before painting them?

Thanks Thor,
As for your question.
For the larger (and forgeworld) models yes. They get a nice bath to remove the release agent followed by an enamel paint primer (I find it helps the paint stick to the model better).
All of my other models are painted with a pot of paint and a brush.

The lack of undercoat makes my eyes twitch ;)
Good job.

Sometimes you just have to run with it.

So far great job! Must say, I was shocked by the lack of primer, but reading the post I’ve found a method, and frankly is very original and inspiring.

However we need more blood (just joking, this is one of my leitmotiv)!

Thanks Stats,
Normally I do undercoat but for this model, I just worked organically moving through stages as the effect I was looking for developed as I went.

That’s a beast of a model!