It’s not often that you get to take a painting lesson taught by a five time Slayer Sword winner and now I can say I have; Kamui as well since he also went. Todd Swanson taught a class on Saturday on how to paint rust at a local gaming shop, Crossroad Games in Standish, Maine. Also with him was Kirill Zhilkov, another Golden Daemon winner, who taught a lesson on freehand painting.

It was a great time. Each lesson was two hours and we only had to bring our brushes. The paints were supplied as well as the materials to paint. Todd and Kirill are headed to AdeptiCon to teach classes and we got to be their dry run for it seeing as they are local. Lessons by two amazing painters for $10? Yes, please.

First was the rust technique by Todd. He supplied us with a cast leg off his Golden Daemon winning Plague Lord Festus model. He had already base coated the leg for us and first up was learning some blending techniques. Doing smooth blends is something I’ve been trying to get better with so this was my favorite part. I, of course, got some great advice and will be applying these lessons to my own models. 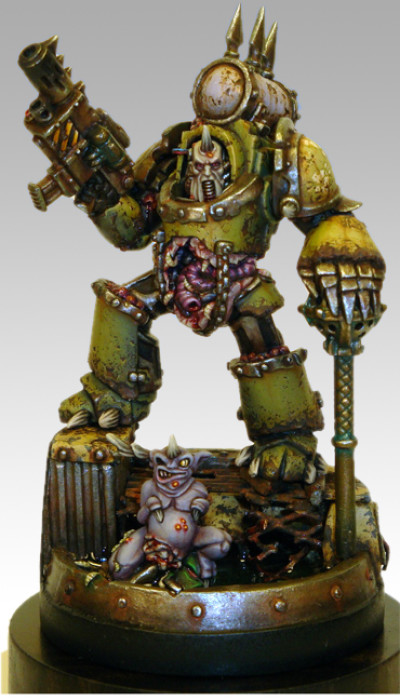 The lesson was broken out into four parts. The first part, as mentioned, was the blending. The big take away here for me was learning, which you’d think I’ve have realized but didn’t, is that to blend from light to dark you want to start your brush at the light point and pull towards the dark point. Where your brush touches first has the least amount of paint and where you end has the most. It makes sense but I never thought about it even though I do the same thing with washes.

Oh, we also got some color theory lessons. To shade the green on this we used a blue. 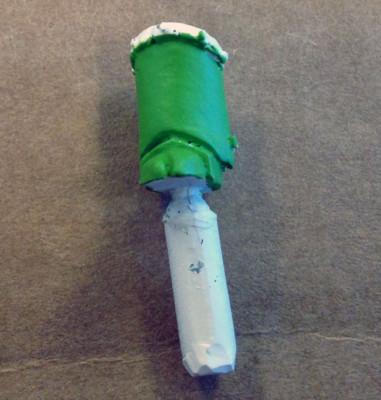 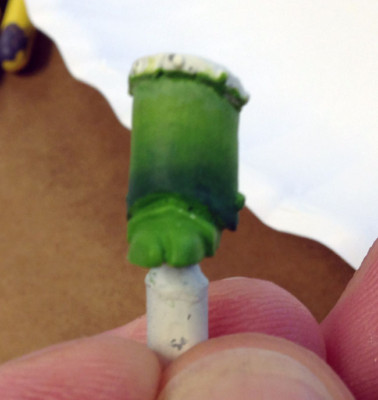 This is somewhere in my blending process, not yet completed. Pardon the blurry shot. 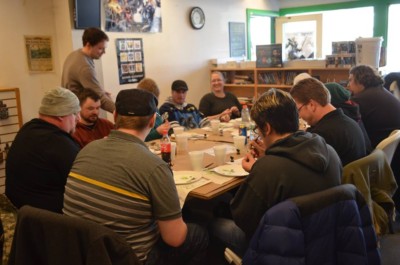 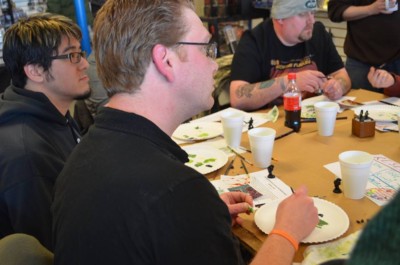 Kamui and I apparently listening intently to what Todd had to say. 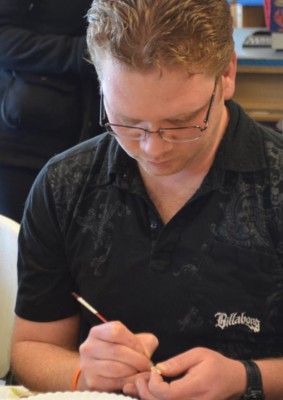 Me working on my blending.

You’ll notice in the later shots that I also blending up from the base coat. I used a bleached bone color and starting at the mid tone, brushed up to where it would be lightest.

Next up was applying the rust color. We used a dark coppery metallic paint. We applied the rust using a sponge to get a nice random effect and aimed to keep it heavier where it makes sense, like the bottom of the leg. 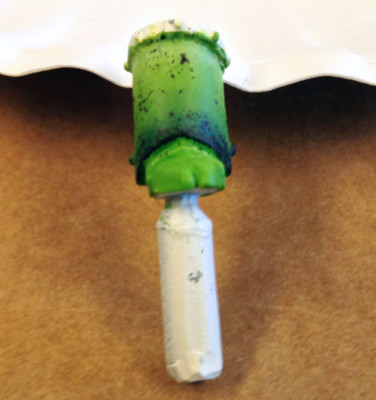 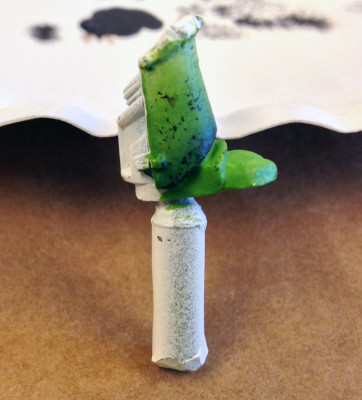 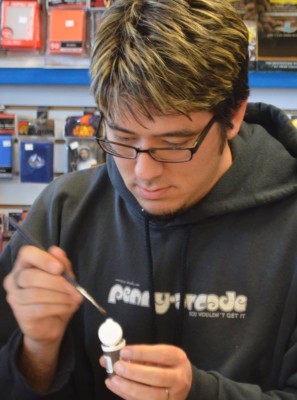 Kamui getting the rust color for step #3.

Again, sorry for the shots. It wasn’t the best.

The third step was to highlight the rust by underlining it with a highlight. This is the stage where things begin to really jump out. Now, of course Todd will highlight each piece of rust, even the tiniest pieces. That’s why he’s a Golden Daemon winner. For the sake of time, and my sanity, I opted to focus on a few areas. 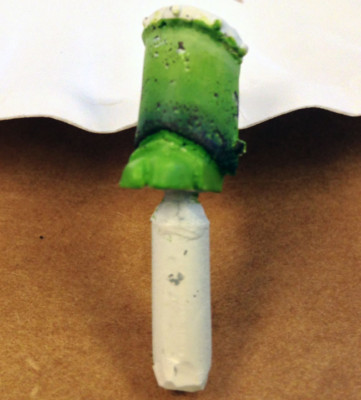 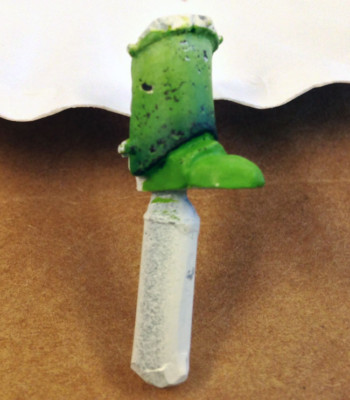 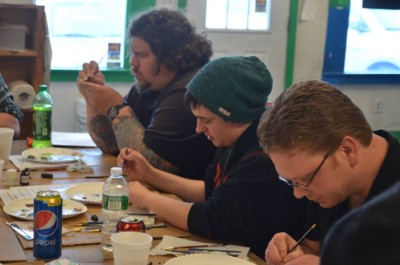 Me focusing on highlighting those tiny damn paint chips.

The last step, and what finally sells it all, is the rust dripping. For this we used really thinned down brown paint. Like with the armor blending, we start where we want it the lightest, so further down, and bring it up to where it’s the heaviest, at the chip. I took these shots at my house afterwards to get some better final shots. Seeing it this close up I realize I could have fixed some paint chips with heavy highlights but with a time limit, and terrible lighting for painting, it is what it is.

It was darker near the bottom of the leg than I wanted but with time being a factor, I just wasn’t able to go back and lighting it up some. That being said, I’m a fan of strong transitions like that, it’s just harder to see the rust is all.

Anyway, I’m happy with how this came out. That’s some of my best blending and realistic rusting ever. I take that back, it is my best of both. Having such an awesome teacher will do that :)

Now, the freehand. Something really cool we learned was creating a stencil for replicating something. So, those of us who freehand chapter symbols on Marine shoulders, things like that. What Kirill does is draws out what he’s going to paint, again if you’re doing this over and over, on a parchment like paper. He then pokes small holes in the patterns at critical junctions. You then take the pattern and place it over your model and using a pencil, we used a mechanical one, lightly draw the circle on the model from each hole in the stencil. Remove the stencil, connect the dots with your pencil and commence painting. 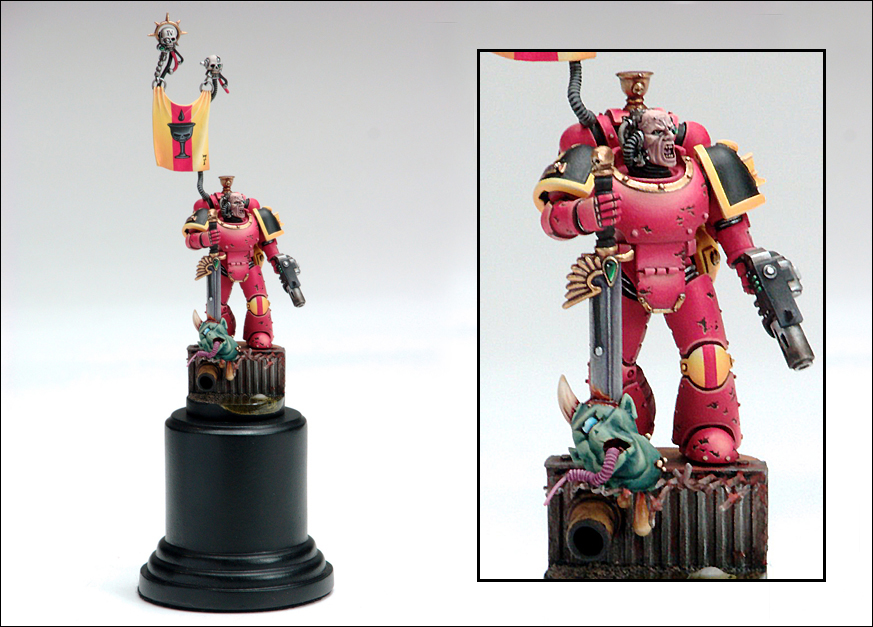 The big thing with freehand is thin paint. You don’t want your freehand raised above the surface, so lots and lots of thin layers to build it up. What I decided to do was start off with my darkest color and brush up to the lightest color. I can’t tell you how many layers I did but this is the end result. I could have had some smoother blends in there for sure but I’m pretty happy with it. Also, I realize I only have one shot here but that’s not for lack of lessons or technique. I just got so caught up in painting that I didn’t take any progression shots! This was also a four step process. Kirill helps Carl with his freehand and it looks like Carl is in love.

I’ve actually done so much freehand since this class, and even prior, that I’ve written up my own tutorial for it.

So, an amazing day learning painting techniques from national award winning painters. If anyone is reading this, and is headed to AdeptiCon, and was thinking about taking their classes, do it. What I learned in four hours is more than I would have learned in a year on my own.

This class was so inspiring that the first thing I painted after was this Herald of Khorne on a Juggernaut, one of my favorite models.

You can also see something a bit more recent with my counts-as Abaddon model, Fane Bloodstar.

Also, I’ve put together a list of ways to become a better painter. Awesome article thor! On the rust “dripping”. One thing I’ve been learning is an easy way to get this effect, is by using oils, and mineral spirits. You seal the model (this is generally the last step of the model paint), then mix your oil paints with some mineral spirits and apply to the model, dragging it down where you want (or reverse as you’ve been talking). Then you use another brush with mineral spirits to thin and blend the oils, until it looks exactly the way you want it to. Because it’s oil, you have a huge amount of working time, and can really get exactly the look you want.

I do agree that is some amazing rust and weathering work you’ve done!

I’ll keep that in mind. I don’t do weathering much since I set my Orks aside but it’s one of those techniques that’s just nice to have in the arsenal for when you do need it.

Thanks. It’s not perfect but I impressed myself with it. Always room for improvement!

Great article Thor, it makes me want to get my brush out and start painting right away, which is no mean thing ;-).
I’ll have to try the ‘stencil’ technique for my Chapter’s shoulder pads, they’re such a pain to paint and this might speed it up for me.

I’ve spent the past few days since that class trying to figure out how I want to make my stuff better. It was definitely inspiring to be at and glad that came through in the article.

I probably should do the stencil too. I freehand all my warband markings on my Chaos Marines and uniformity is hit or miss for sure.

Nice write-up Thor. This was a great event to participate in, I only wish I didn’t have to leave half way through Kirill’s class. I was glad to have caught the stencil trick before I left.

For me the class with Todd was helpful not because of the specific techniques but because he was there. I have read about the same techniques and tried them on my own but it’s not the same as having someone there to tell you what you’re doing wrong and how to fix it. I found this particularly helpful with the blending portion. After the class I tried it on my Commissar’s power fist and had much better results than in the class, thanks to Todd’s guidance.

I completely agree. I realize it’s the day and age of technology and we all hunt down references, tutorials and the like for painting and hobby stuff. Yet, there is nothing quite like having a guiding hand there while you do it, especially with art.

Wish I could have made it. How long did it take to blend the leg out? And do you see yourself using what you learned on you rank and file troopers?

Todd’s class was 2 hours, of which I’d say we blended for a good 45 minutes. Of course, Todd said when he’s doing that leg (he had some legs painted to show each step of the technique), that it takes him 6 hours. Now that I understand the process better, I think I could manage what I did in half the time, maybe 20-25 minutes.

With that in mind, I can’t say it’s going to do much for me on the rank and file. I can’t see blending one shin on a leg for 25 minutes per-model. I’ll stick with my black wash and black lining on those guys. Though, it will help me on power weapons that I do for Champs and such. However, I really want to paint up an HQ and utilize the technique.

WOW, I am jealous. I know it was talked about many times and it’s awesome that it happened finally! Would love to see pics of anything you do using the techniques.

If it weren’t for the fact those two were headed to AdeptiCon to teach there, I don’t think we’d have seen them. We got to be practice for them, which was fine by me. Beyond that though, doubt we’ll see it again, though I would love something a bit more regular like that. Who wouldn’t?

The blending will mostly be here and there, like a power weapon or something. I’ll definitely want to give it a go on a full model like an HQ but that may be a while. The rust technique though I don’t foresee needing for a while but I’ll be ready when I do need it.