How to Make Miniature Ice Bases the Super Easy Way

That product is Vallejo’s Still Water. Here’s a shot of the product.

It’s very inexpensive considering how much you get. I’ve had my bottle for years and I think this will last me another 40 years.

The first thing I do is squirt some Still Water into a cup.

Now, you can use this as-is and just put this straight onto the base. It dries pretty clear and has a good shine to it. However, for ice it isn’t very convincing as-is and looks like water (hence the name Still Water), not so much like ice.

So, what I do is put a little white paint into it. Usually I put less than a drop in.

I put a drop of white onto my palette and then take my stirrer, and put it into the drop of paint, and then mix it into the Still Water. You end up with a cloudy milky look.

The white mixed in, when dried as you’ll later see, gives it a frosted look. Ground that’s covered in snow doesn’t typically have very clear ice. Instead the ice has a white appearance with some transparency, which is what I’m aiming for when mixing in white paint.

Applying Your Ice to the Base

To make the task easier I have this syringe that I suck the Still Water into. I don’t recall where I got it but it’s proven very useful for tasks like this.

Next I squirt the Still Water “ice” onto the base. If you don’t have a handy syringe then you can just use a brush and load it up. Pouring it onto the base is tricky with the model already on there.

Once I’ve got the Still water on the base I then use a brush to smooth it out some. The Still Water will pool up and doesn’t spread itself out all that well, so using a brush I push the edges of it outward so it isn’t just sitting there. It will level itself out a bit as it sits but I like to help it out.

You can see where I put the ice effects by looking for the wet milky areas. I put the ice near the base of the snow piles, and in any small holes in the snow (like that first shot – near the front).

Any snow that melts would run off at the base of the pile, as I placed it, and freeze there. Plus, it just looks a bit odd when you have an ice patch in the middle of nothing.

Depending on how thick you do the ice effects depends on how long it takes to thoroughly dry. I didn’t go too thick with it here, so I gave it around six hours to dry. I’ve done other bases through where I went pretty thick with it and it took a good 24 hours to completely cure.

A problem I ran into is where it pooled against the toes of the Helbrute. The Still Water has a good viscosity to it, but I figured it would settle down and level out against the toes. It didn’t. The result was the appearance of ice on the side of the toes, like the Helbrute has been standing there for a long time and ice built it up around its feet.

Obviously that wasn’t what I wanted, so I came back in with some snow to build that up against the toes like the Helbrute was stepping into a snow pile instead. You can read about how I do my snow in this snow basing tutorial.

I also have a great tutorial for making icicles to add even more detail on more elaborate bases.

I made a change though from the usual way I do snow, and did not mix white paint into the snow. Without the white paint mixed into the snow it has a more wet look; it’s slightly transparent. The idea being that where the Helbrute is stepping is into a slightly frozen snow pile, the snow pile that had melted a bit previously to create the ice remaining around that foot. The new snow added around the foot in this shot is prior to cleaning off the excess.

I also added some more iced areas to the base while I was at it. You’ll see I added some on top of the rock on the inside and also around the lip of the base in a few areas. I just felt it needed a little more ice.

Sealing the Ice Base

Once everything is dried I go in with a brush-on gloss sealer and seal the ice effects.

I picked the sealer up at one of the craft shops in the area for a few bucks. On its own the Still Water has a good shine to it and is already convincing as ice. I just like to make sure everything is sealed. The gloss sealer does give it a bit more shine as well.

Here are some shots of the model completely finished, and you can see the results a lot better.

You can see some of the ice I did on my Flesh Hounds as well.

Also, here’s some shots of my Chaos Knight where I did a very deep area with the Still Water.

This is a video I watched when I was researching Still Water. It shows you some of what you can do with it, beyond what I have shown here with the ice base.

That’s all there is to ice bases. It’s really simple to do as the Still Water really does all the work. You just have to coax it a bit here and there but even that is optional. I’ve done other bases where I just poured it right on, larger bases, and let it does its own thing and got some really interesting results.

Snow and ice are imperfect things so don’t overdo manipulating it. Imperfections are a part of nature and help make things look more realistic.

More ways to create unique and interesting basing for your miniatures. 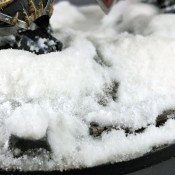 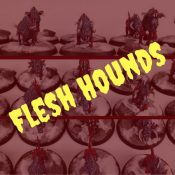 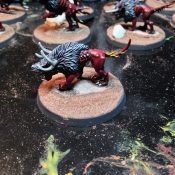 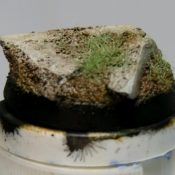 It’s still something I’m experimenting with too. There’s a lot you can do with the Still Water, like even create icicles. It’s a very interesting medium.

Looks nice!
FYI for anyone who needs one, you can get syringes like that at any local farm supply or feed shop that caters to livestock. You typically have to ask at the counter, but they have them and they’re cheap. They’re larger than normal human syringes because the dosing for big animals is obviously greater. You can even buy them without needles.

That’s good to know. I have a few of them but some are cracking and just wearing out on me. Be time to get some new ones soon.

I’ve seen it and it does look great. One of the authors here used it on one of his model and looks awesome.

The syringe is brilliant. Another Thor idea to loot! Looks great buddy!

Funny thing is, I didn’t come up with that idea until doing the tutorial. The bases I did before either had no model on it, so I could pour directly to the base, or I was just doing very small patches and used a brush. I was getting ready to add it to the base and realized the syringe would be perfect for getting in there and pooling it up easily.

It’s those little lessons and tips that make this community so awesome. :)

Nice tutorial! This is a convincing effect and as we discussed the other day, it would be easy to add this to an existing base.

Definitely not a hard thing to do. It’s just a matter of finding the time to go back and “fix” things when there’s unfinished things still. It’s a never ending cycle for sure!