Next month is a 40K event I’m putting on at Crossroad Games in Standish, Maine called Fratris Salutem. One of my many tasks is to get trophies made for the event. A friend of mine is casting parts for me and at the moment I have three of the eight I need.

Yesterday I decided it was time to get started on painting them up. Normally we’ve done trophies where the “statue” part is just a single metallic color. There’s nothing wrong with that, and we’ve had some amazing trophies created, but I wanted to do something different. The event puts the Imperium against the Forces of Chaos so I wanted to distinguish the trophies between the factions. I’ll use the same piece for each type of trophy, so having a visual difference I thought was important. I decided to do the Imperial ones as weathered chrome and the Chaos ones a brassy color.

Here’s a shot of the pieces base coated and washed. The wash is still wet as you’ll notice.

As much as I want to lovingly paint these to an amazing standard and spend hours of them, because they are cool pieces, I don’t have the time. I could easily spend 2-3 hours on one of these but I have eight to do and I won’t have 16-24 hours worth of paint time between now and May 23rd. There’s just too much I need to get done. So, the below shot is something I knocked out in about 15 minutes, minus the drying time on the washes.

I also used this as a chance to work with TMM (true metallic metal), some more. I’ve played with it a bit previously but doing eight of these will really let me work with the technique. TMM is the same concept and approach as NMM (non-metallic metal), just using metallic paints. I honestly prefer the look of TMM over NMM as well. This was my first time trying to paint a chromed surface. I did a lot of searching around to get some examples and just went for it.

So, there’s the first of eight done. I actually finished the other two you saw above as well but I do want to leave some mystery to the participants who read my blog.

I’m extremely pleased with how that came out, especially considering how little time I put into it. The blends aren’t perfect, close up it’s a bit sloppy, but I still like it. It’s actually kind of liberating to work so quickly. Normally when I paint I usually way over think everything. Would light really hit the surface the way I painted it? Shouldn’t the shadow here be a bit darker? By giving myself a tight timeline I just went for it and didn’t complicate the process by questioning what I was doing. I just painted and let instinct guide me instead of critical thinking. I’m going to have to find a way to continue doing that on my army because it’s a lot less exhausting.

Did I manage a convincing chrome? Any tips or suggestions? 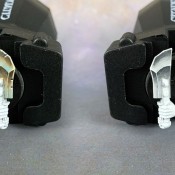 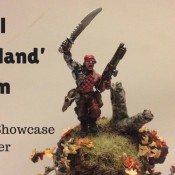 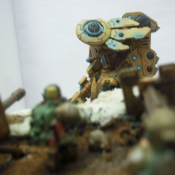 Looks nice!
Still up in the air on if I can make it or not.

You won’t miss out on anything by a late registration, so no rush.

I think that looks incredible. That pinkish reflection is actually from a real reflection, right? If that’s paint, then it just got 10 times more amazing. I also prefer TMM to NMM, myself. If done well it looks absolutely stunning, as this does here. I like how you’re all like: “These are so sloppy” but they’re way better than anything I could do. Great work! Can’t wait to see the Khorne symbol in the same style.

I never noticed the pink until you said something. I can’t say if it’s a reflection or not…I’ll have to check it out when I get home tonight. It does look cool.

Meh, we are our own worst critic. Don’t get me wrong, I’m really happy with it but at the same time I know I could have done better with more time. That’s the hard part, knowing you could do better.

The Khorne one won’t be all super reflective. Being it’s brass, it wouldn’t take on the shine that chrome does. Still, I did do it in a blended fashion to indicate the light source but it’s definitely not as bold as the chrome.

Fair point on the brass, but all that detail’s going to pop like crazy. On the pink, I don’t know if it’s even a good idea to artificially add a reflection like that, but there’s no denying it’s a cool effect for the right piece. Seems like it could take a lot of work, but this is actually one of the main reasons I love TMM. NMM will never pick up an ambient reflection like that, so it has to be painted on. Most people, even if they’re good at NMM, don’t go that far.

I’m with you on TMM over NMM. I can appreciate a well done piece in NMM but I still prefer TMM. If nothing else I just can’t see the reason to spend so much time making something appear metallic with non-metallic paint when you have metallic paints you can use. I understand the skill involved with NMM but I’ve never been one to use a technique just to show off. TMM will always be more real and more convincing because it’s actual metallic paint.

Really, the only reason I can see to use NMM is if you want to avoid the real lighting and reflections on the surface for some artistic reason. Then again, it’s that which makes TMM so cool to me.

Thor…that is an absolutely lovely job. It’s so good I wouldn’t think it wasn’t chrome to begin with…stellar work!

Much appreciated. The basic technique is simple enough to do once you get the concept of how really reflective surfaces work. I’m sure there’s a ton of nuances to it that I’d work out if I were spending more time on them but for a first attempt, I can live with it!

Stunning work Thor. Really like the effect you have achieved on the chrome. Tutorial perhaps? ;)

I’ve made two of these using this technique in my entire life. Not quite sure I should be giving tutorials on it just yet :)

Dont be so modest :D. The one above looks great and I would like to know how you did it :)

Once I get these all knocked out and have some free time I’ll see about doing something :)

Man you nailed it looks fantastic.

Hmmm…Looks more like nickel than chrome. Better luck next time ;)

Man, I’m going to have to repaint the entire thing then…

I’m about to do some writing finally on metals, but DAMN if this isn’t one I’ll have to link to. I love that chrome. 15 minutes? Wow.

Yeah, I knocked it out really quick. Base coat and wash. Then went back to lighting the upper half with the same metallic. A few quick glazes of blue and brown and it was done. I didn’t aim to perfectly blend everything together. Had I done that then I could have easily spent 1-2 hours on it getting those seamless blends.

This looks amasing! It still comes up when i search TMM. Any more pictures you can share? Whats are the colors that you use? Im goıng to order some new paints and want to give this a try.

These are the only pictures I have unfortunately. It was an experiment and I haven’t used this technique on anything else.

Most of the colors were Vallejo but you can use any brand. The big thing is having a bright metallic, a blue and some browns. I did use the GW paint for the metal, Runefang Steel. I then washed it with Nulin Oil and then used Runefang Steel again for the bright areas. The rest were Valljo: Electric Blue (I think), Charred Brown and Beasty Brown. The colors going over the metal have to be done thinly so the metal shows through.

Really though, as long as you get the blues at the top and brown below it you’re on the right track.