This character feature is intended to give some more in depth background on Soulgore, a Chaos Lord for my warband, the Disciples of Twilight. I would like to take the time to flesh out all of my HQs this way, so this is the first of what will hopefully be many.

Also, there’s a painting showcase for Soulgore if you’re interested.

Soulgore is a Chaos Lord of renowned close combat ability. He is most often seen wielding the Axe of Blind Fury in combat and surrounded by the Unbound, the gibbering mutated beasts that were once Chaos Marines.

Like all of his brothers, Soulgore came to the planet Forlorn through the strange portal that had manifested for him upon the failure of his fate quest. He had been a sergeant of the 4th Tactical Squad with the Fate’s Angels prior to his fall. Soulgore, though known by his birth name at the time, had served with the Fate’s Angels for 80 years before embarking upon his fate quest. During those 80 years he served faithfully, though without any remarkable honors.

Soulgore’s embrace into the Disciples of Twilight was 50 years after Ghostwrath’s appearance on Forlorn. By that time much had been accomplished. The slow and steady trickle of former Fate’s Angels coming to Forlorn continued and their ranks were supplemented by a contingent of Beastmen indigenous to the planet, as well as native humans. The area claimed by the Disciples of Twilight upon the planet continued to expand and the warband was thriving.

The Disciples of Twilight did not number many. Of Marines there were around 80. Their auxiliaries were larger, though not substantial. Their Beastmen detachment was approximately 200 while their human auxiliary was close to 100 men and all armed with primitive weapons. The Dark Eldar had them outnumbered by at least three to one and they were far more prepared for war than the Disciples of Twilight were.

Ghostwrath and Darktide broke the Marines down into five man squads. Each squad was given a very specific mission. The missions individually were seemingly insignificant but when orchestrated in the symphony that was planned the result would be brutally effective. This was guerrilla warfare for the Disciples of Twilight. They could not stand together with bolters raised and march for the enemy as they once had. If they were to survive and save the people then it had to be war on their terms. 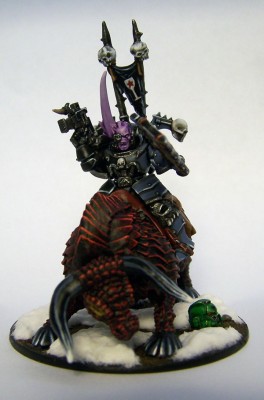 During the war, which lasted for two months, Soulgore distinguished himself. Every mission he was a part of had succeeded. If any of his fellow Marines fell, whether they had life remaining or not, he would bring them to safety. Eventually Darktide and Ghostwrath brought Soulgore, as well as the other Marines who were showing remarkable skill in the war theater, in on the war planning. This council became known as Furor Noctis and remains as the ruling body of Disciples of Twilight.

The Disciples of Twilight eventually won out and the remains of the Dark Eldar fled the planet. Though they had secured victory, the cost was substantial. Thirty of their brothers were slain in the war and over half of their auxiliary force was destroyed. The warband’s supplies were virtually gone and another battle would see their supplies completely depleted.

A few years after the Dark Eldar battle an Imperial exploratory fleet had come into the system and landing parties were sent to the planet’s surface. Those landing parties were either slain or captured by the Disciples of Twilight and their ships seized. With the Disciples of Twilight aboard the landing ships, they took to orbit and boarded the larger fleet vessels. In a few days they had complete control over the exploratory fleet.

The Furor Noctis had met and decided to send Soulgore and a war party to secure the supplies they desperately needed. There were some supplies aboard the fleet but it was an exploration fleet, not a fleet of warships, and their survival depended upon supplies for war.

It was during this campaign that would become known as the Crusade of Fire that Soulgore came to the attention of the Chaos gods. Soulgore pursued his mission relentlessly. The survival of his brothers was placed in his hands and he would not fail them. During his crusade the Disciples of Twilight encountered the Dark Angels who sought to remove them from the hive city they had gained control of, as well as Sisters of Battle. Battles were fought against the Dark Eldar and the Tau after they vacated the hive city in search of more resources.

Each drop of blood spilled by Soulgore raised his standing among the dark gods. He was gifted a daemonic bull of a juggernaut which he rode into each battle; the bull’s nostrils exhaling flames before each charge into the enemy. A weapon of ancient origin was revealed to him by the Chaos gods who led him to it. The axe seemed plain enough at first until Soulgore held it. Once he gripped the weapon’s haft he was filled with an all-consuming hatred as the axe ignited with swirling flames. 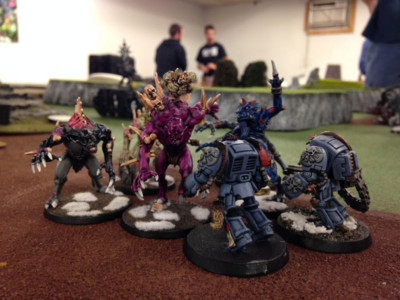 In battle none could stand against this artifact axe. Armor was rent with ease and Soulgore found the imbued hatred gave him a decisive battle focus.

Not everything bestowed upon the war party were gifts however. A few Marines had succumbed to a weakness in their gene-seed as a result of warp exposure, and no doubt the hands of Chaos. These Marines were transformed into huge hulking beasts vaguely resembling humanoids. They had little control of their minds and actions. These beasts were locked aboard the ship during travel.

Once battle was met these monstrous mutated Marines would be released and sent forth like hounds to leap upon the enemy. Soulgore often fought alongside his mutated brethren atop his daemonic steed. Those who transformed into these spawn were called The Unbound by Soulgore and they came to serve as his bodyguard faithfully in each battle.

With the ship loaded, Soulgore and his war party returned home to Forlorn where they were greeted with the cheers of their brothers. The Disciples of Twilight may have failed their former chapter and never asked to be dumped upon the planet Forlorn but they would survive and make a life for themselves nonetheless. 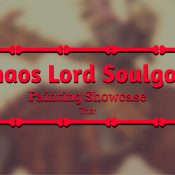 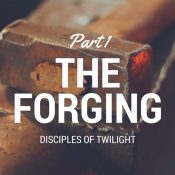 What is Soulgore mounted on? Looks awesome.