Cadaver here from Home of Cadaver

It has been a really hot year for Blood Bowl for me, finally managing to finish not only one (see my Orcland Raiders team if you haven’t already) but two with the latest addition of the brand new Nurgle Rotters team.

The models are full of character and an amazing sense of speed in total contrast with their bulky appearance. Bonus points for the “bug like” armour and the spikey wooden signs.

The only thing that bothered me is the fact that I would like to make the models as unique as possible, so I made a small conversion changing hands on 2 models and of course, the necessary head swap made the models as different as possible.

Highly debatable models through the community and I am still not sure about their looks. I really saw where the designer went for here but I think they kinda overdid it with the horns and the mutations to a point where they don’t resemble a beasman anymore.

I went with the stock appearance here, just the appropriate head swap to make the models look different, Still, really fun models to paint and really detailed ones. I will probably have to make a 3rd one at some point as my BB league is in full swing since these fellas are the most valuable ball carriers you have in your team.

Last but not least, the core of the team, the rotters themselves. Again, lovely models, nothing much of a conversion going on here, just some head swaps to make the poses as unique as possible.

And let’s not forget the extra muscle (or should I say mucus) the almighty rotspawn, or in other words, Garry the snail (pun definitely intended).

I used the old Beast of Nurgle for this one, not particularly a great fan of this model but I had it laying around and I couldn’t wait for the release of the BloodBowl one.

I added some shoulder pads to make him more BloodBowl-y and he is ready to break some defence lines. 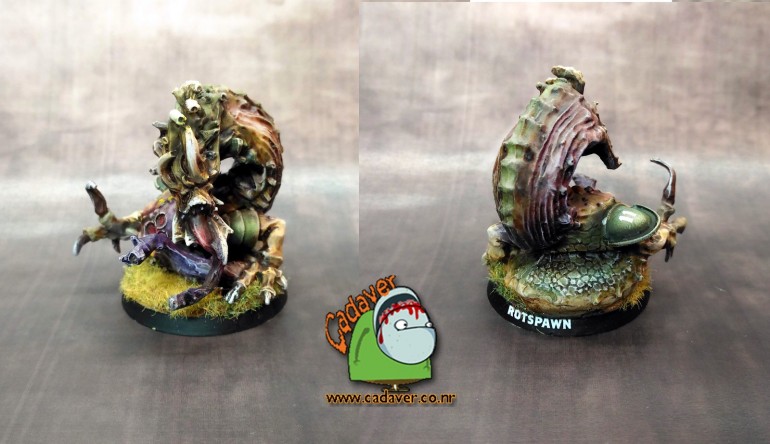 I couldn’t resist of course and add some extra staff for the team, in the form of Cheerleaders. A Nurgling base and some greenstuff work later, resulted in this. The Plaguebearer is a musical addition to the scene. 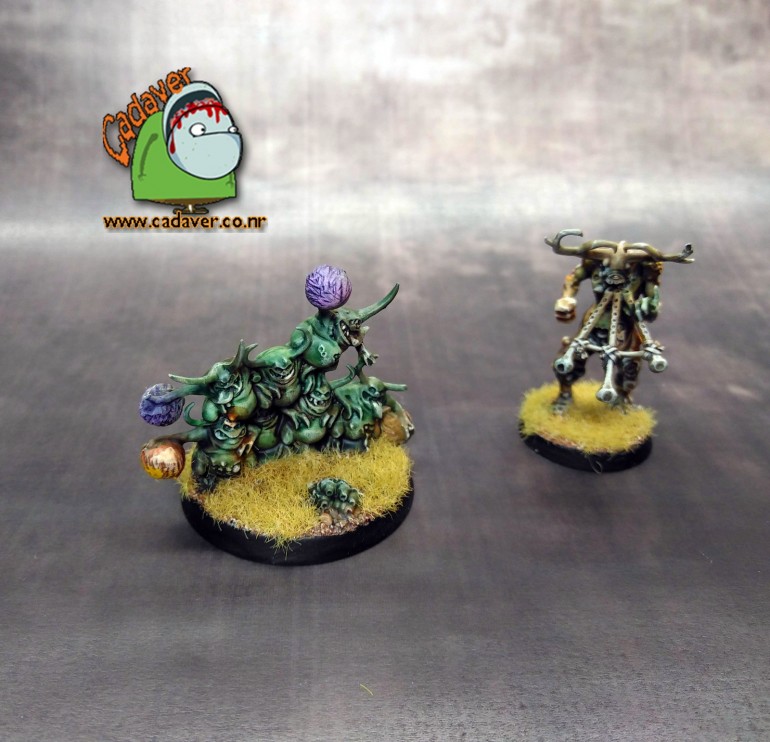 There are a couple of things extra for this team to be finished, The infamous Coach Captain Sven ‘Four Eyes’ Erikksen and a Plague Doctor but this is material for another future article so stay tuned.

I would love to hear what you think and as always comments are more than welcome!

Till next time, take care!

As I said on your blog, I love these guys. The blending, shading, color tones, everything. Awesome work.

And again, thank you so much! I am really happy with how they turned out too!

Those look great! Excellent paint work, and I love the Beast of Nurgle with shoulder pads!

I can see what you mean about the Pestigors, and I hope if they get a full box of them for Beasts of Chaos or something, they rein that in a bit. These would be great as the most mutated couple in a Unit of 10 or so, but as the only ones, it’s a bit much. They’re cool Models, but they don’t really say “Beastmen” as strongly as I’d like.

The Nurgling Cheerleaders are pure win, too!

Thank you so much on your comments! My thoughts exactly on the beasmen, it would be interesting to have these as champions or something that stands out but as rank and file they are too much. As for the Nurglings, these models were just screaming to be made as cheerleaders :P

Great stuff! I love the scheme you have picked for the team, and the Nurgling cheerleaders are just awesome! 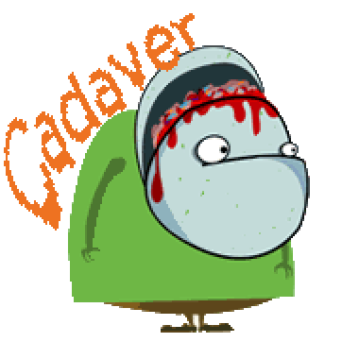 Teacher, modeller, painter, Wargamer mad about music and trying to fit all these in a tight 24hour schedule! Always trying to find more challenging and unique projects to get my teeth on!